So the US gets Saddam. Then what? An easy solution for the US could be the trifurcation of Iraq. But Turkey and Iran will not play ball. 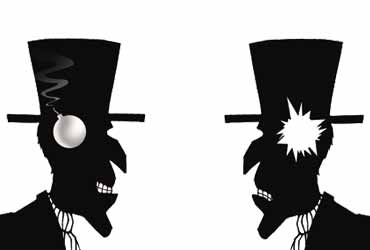 outlookindia.com
-0001-11-30T00:00:00+0553
According to a recent report in the New York Times, Donald Rumsfeld, the US secretary of defence, keeps a 4-5 page memorandum in his desk on all the things that could possibly go wrong with US calculations in its war on Iraq. He also updates it constantly. The list of worries includes the possibility that Saddam Hussein will use weapons of mass destruction against his own people and claim that the Americans forced him to do it; that he could blow up the oilfields in Kirkuk and Mosul and deny the US the funds it will need for Iraq's reconstruction; and that if the US went in alone it would be denied the support of the other Arab nations—which it deems necessary to put Iraq back on its feet. Rumsfeld's other worries are that he still does not know whether US troops will be received by the Iraqi people with flowers or bullets. The latter will change the duration and nature of American involvement, not to mention the number of casualties the troops will suffer. Closely related to this is the uncertainty that surrounds the duration for which America will have to occupy and govern Iraq till it turns it into what Bob Herbert of the NYT calls "a garden of democracy blooming in the desert soil of Iraq".

Missing from this catalogue of uncertainties are the problems that America will face in Iraq after the 'war' has been won, even if victory is as swift and as painless as it was in Afghanistan. Perhaps this is because despite the thousands of PhD doctoral theses on terrorism, insurgency, nationalism and ethnicity that its universities churn out every year, this is a country that has had absolutely no experience either with colonialism or with insurgency within its own territory. If it had, Rumsfeld and his 'sunshine warriors' would have known, and known in their gut, that their problems will not end with the annexation of Iraq but will only begin there.

What the Americans are hoping for is, of course, no secret. Their troops will first establish a base in the Shia-dominated southeast and the Kurd-dominated northwest, where they may be received as liberators. Then, faced with the certainty of a military attack, defeat and the possibility of death, Saddam's senior military leaders will force him out, or just kill him, and surrender to the advancing American forces. Only if all this does not happen will US troops actually descend on Baghdad. They will not come in, at least to begin with, in tanks with cannons blazing to destroy everything in their way to rubble, trapping the civilians underneath. Instead, they'll prefer to use their incomparable eavesdropping and human intelligence capabilities to identify command centres, including hopefully Saddam's whereabouts, and drop men and weapons into those locations. Those that can be destroyed from the air will be bombed. Who knows, the Americans may even get lucky and hit Saddam right at the beginning.

But then what? An easy solution would be to trifurcate Iraq into a separate Shia state, a separate Kurdistan and leave the central region to the Sunnis under a more amenable leadership. That would guarantee a quick and relatively painless exit, but such a solution is not even on the cards. Turkey has made it clear that it simply will not tolerate an independent, oil-rich Kurdistan, for that will make it absolutely impossible for it to control its own Kurdish southeast. Its support for the war is thus predicated on maintaining the unity of Iraq.

A separate Shia state in the southeast would mean replacing one American headache with an even greater one. For it would be relentlessly drawn towards a union with Iran. Iran has coveted the Shia regions of Iraq for a long time—one of the causes of the Iran-Iraq war. Shorn of Saddam's control, this weak region will gravitate towards Iran and incomparably strengthen the second pole of Bush's axis of evil.Sooner or later, his sunshine warriors will have to choose between letting this happen and carrying their military reconstruction programmes to Iran. But Iran is not Iraq. Its army is large, and fresh. It has an array of missiles and may not be far away from acquiring nuclear weapons capability. So Bush will have to act very, very soon. In the meantime, what to do with North Korea? Let's face it, once the Americans start down this road they will face the prospect of endless war.

But these problems will emerge gradually. What will happen within days after the Americans have entered Baghdad as victors? With 20 years of experience of insurgency in Punjab and Kashmir, let me paint an alternate scenario.

Let us assume that Saddam is dead, his immediate coterie of generals and ministers are in prison, the Republican and Special Republican Guards are dead, imprisoned or disbanded. Let us assume the victory train contains a large number of returning Iraqi exiles who are individually very worthy men and women, and democratic to the core. Let us assume that the US keeps only a select number of gubernatorial posts for itself and creates a transitional government in Baghdad out of the Iraqi returnees, their friends, and its own 'human assets', and fills the lower posts from among the Kurds and Shias who live in Baghdad and the central region. Let us assume that from these recruits the US builds a new administration, a new police and a new judiciary. Will the Iraqi people accept these new institutions and those who man them? The answer is no. For quite apart from the fact that they will have ridden in on the shoulders of people who have killed tens of thousands of Iraqis in combat and aerial bombing and another two million children and old people through sanctions, the plain fact is that they have not shared the Iraqi's 12-year trauma and can therefore never become one of them.

So this will be a government of occupation. Can Rumsfeld guarantee that no one in Iraq will take up arms against its members? Here is what will happen when the first shot is fired at an American in a busy Baghdad street. Swarms of US soldiers and Kurd-Shia police will descend on the area or house from where the shot was fired. Hundreds of youth will be taken away for interrogation and brutal third-degree methods will be used on them. Houses will be invaded in search of arms caches, and women inevitably outraged. Eventually those where arms are found, or from where the shots came, will be destroyed, as an object lesson to the neighbours. Each and every search may or may not yield a militant, but it will create a score or more new recruits to militancy.

If the Punjab and Kashmir experiences are anything to go by, the first targets of the freedom fighter/terrorist will not be Americans but Iraqi policemen, judges, government servants and informers. Those who are not killed will be told that they will see their family members die. In no time therefore the police will become demoralised, and may even start tipping off the militants. The judiciary will simply collapse. Instead of withdrawing, the US will have to take over more and more of the policing. Shorn of judicial support, its soldiers will slowly succumb to the temptation of killing captured terrorists out of hand. Alternatively, they will be dragged away for trial before exclusively US special courts and imprisoned in American prisons constructed for the purpose. Thus, within a matter of months, the Garden of Democracy will turn into a police state.

With the passage of time, the Americans will get more and more deeply mired in Iraq. For the likelihood that the new Iraqi militants will join hands with Hamas in Palestine and Al Qaeda and its many offshoots throughout the world will grow instead of diminishing.Leaving Iraq precipitately as Clinton did in Somalia will become less and less of an option.

But could I be exaggerating the dangers? How many Iraqis will take the extreme step of actually starting a guerrilla war against the American administration? A thousand, two thousand, ten thousand? How much damage can they do? The answer again comes from Punjab and Kashmir. At no time during the ten years of insurgency in Punjab were there more than 500 of what the police called 'A' grade and 2,000 'B' grade terrorists, that is those that actually took part in violent operations. Yet, the insurgency killed more than 50,000 people of whom at least 3,000-4,000 were members of the security forces. More alarmingly, 61 per cent of all those killed were Sikhs. In Kashmir, during the genuine Kashmiri insurgency of 1990 to 1995 state intelligence sources had put the total number of Kalashnikovs and associated weaponry in circulation at never more than 5,000, of which one-third would be buried underground by trainees who would come back from Pakistan and quietly return to their villages. The remaining 3,500 active militants took part in operations that resulted in over 20,000 deaths in six years. Today, the death count is 35,000 and still climbing.

In Iraq, the number of recruits to militancy will be incomparably greater. In the case of Punjab, 40 per cent of the Sikhs lived outside the state in the rest of India and were totally opposed to the insurgency. Within the state, the militants never gained the support of the farmers, the businessmen and the intelligentsia. To the end, they remained a disaffected fringe group of economic losers from the rapid changes that were taking place in the state. The militancy in Kashmir resulted from an explosion of rage against the prolonged and contemptuous denial of democracy to the Kashmiris. But, at least, some of it has passed. As late as April 2002, a mori poll showed that at best only 6 per cent of the state, that is, at most an eighth of the people of the Valley, wanted to go to Pakistan. Sixty one per cent felt that provided peace was restored their future was most secure with India. In Iraq, the Americans will not find one taker for a long-term occupation of their country.

No amount of force that the US brings to bear will crush the insurgency. For whenever the pressure grows too great, the militants will be able to escape to Syria, Jordan, Saudi Arabia and even Kuwait. All of these regimes will prefer to turn a blind eye to their presence rather than start launching the kind of cordon and search operations that will increase disaffection within their own countries. So will Rumsfeld seek a regime change in these countries too?

All this is not to suggest that American military pressure has not done a necessary job. But now it would be better to leave the destruction of Iraq's wmd to the UN.