Rules Of The Roulette

We can predict the ultimate fate of the universe. But not of the tiny atom. 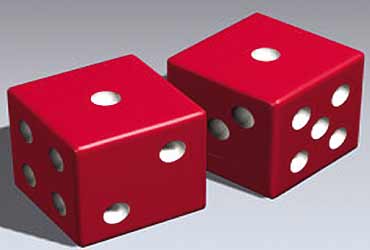 outlookindia.com
-0001-11-30T00:00:00+05:53
Followers of the Indian cricket team, at least those inclined to be charitable, might attribute the World Cup debacle to plain bad luck. Well played, boys, better luck next time. That raises an interesting question though: scientifically, is there such a thing as luck? Does chance have any basis in science?

Consider the coin toss at the beginning of a match. You might think there's a 50 per cent chance that the coin will land heads up. But that's not truly a matter of chance. If you were to carefully observe the way in which you flicked the coin with your thumb, if you were to account for the size and weight and shape of the coin, you would be able to predict—correctly, with 100 per cent accuracy—just how the coin would land. The seeming randomness of the coin toss comes about merely as a result of our ignorance of the precise details of the toss. Similarly, when we say there's a 30 per cent likelihood of rain, the indefiniteness of that forecast only reflects our incomplete data on the weather. Randomness, like guessing on an exam where you don't know the answer, stems from a lack of knowledge. As the great mathematician Laplace put it, if we knew everything about the present, "nothing would be uncertain and the future just like the past would be present before [our] eyes".

Indeed, the great power of physics is its ability to use knowledge of the present to predict the future. Using observations made today, we can predict the height of the tide at noon tomorrow, the time of the first solar eclipse of the year 4000, even the ultimate fate of the universe. And sure enough, experiments confirm that the world is predictable. Drop a stone a hundred times from the top of the Qutub Minar and every time it will hit the ground in 3.8 seconds. It's not a matter of luck or chance. In fact, virtually all our technology relies crucially on predictability. We can drive our cars and microwave our food with assurance because we are confident that when we use technology—itself a kind of experiment—it will yield the same result it did during its design and testing phase.

Yet there is one phenomenal exception. In the early years of the twentieth century, while exploring the properties of atoms, physicists stumbled upon a strange and utterly different reality. Bewildered and confused, they scratched together a new theory to explain what they found. This theory—quantum mechanics—has survived its uncertain beginnings to become the most successful theory in physics today. It is a theory like no other. For the central revelation of quantum mechanics is this: the world is ruled by chance. Yes, the microscopic world is random—not just random because of ignorance, but fundamentally random.

For example, if you try to pinpoint the location of an electron of some atom, you may find it in one place one moment but in a completely different place the next moment. Far from staying put or even following a nice, smooth orbit, the electron jerks around frenetically, haphazardly, like a dancer seen under a stroboscope. That's because—so says quantum mechanics—the position of the electron is a matter of chance. There's even a small chance the electron may pop up on the moon.

Quantum mechanics has transformed the way we do physics. Today, using gigantic particle accelerators, we violently smash particles again and again, over and over, in exactly the same way, literally billions of times a minute, for years. But, unlike the stone dropped from the Qutub Minar, we don't get the same result every time. Because quantum mechanics is based on chance, it offers the possibility of a rare lucky discovery, a Nobel-prize-winning jackpot. Einstein, who despised quantum mechanics, scoffed at this mode of inquiry, saying he would rather be "an employee in a gaming house than a physicist".

The philosophical implications of a world run by chance are hard to accept. "God does not play dice with the universe," Einstein famously complained. And why is it that the macroscopic world of big things appears so predictable, so definite, when the underlying microscopic world of atoms is itself random? All this is very disturbing. Ah, but if only the Indian cricket team had been microscopic, they could really have blamed their defeats on quantum mechanical bad luck.