Rules Of The Name 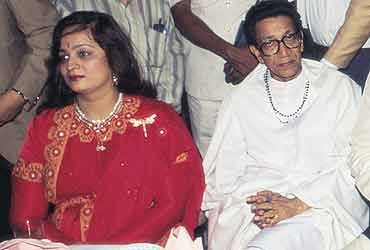 Smita Chitre, somehow, does not have the same aura and zing about it as Smita Thackeray. In Mumbai and Maharashtra, perhaps in other parts of the country too, it helps being a Thackeray. The name ensures instant identification, there is awe followed by respect or fear, or both. If it's a Thackeray from the fortress-like precinct of the Matoshree bungalow in Bandra of Balasaheb, it carries even more punch. No wonder then that there's a battle ensuing in the Thackeray household about a powerful daughter-in-law continuing to use the name even after her divorce from Shiv Sena chief Bal Thackeray's son Jaydev last fortnight.

Smita Thackeray's powers came from her proximity to her then father-in-law, Bal Thackeray. In fact, political circles still believe that the Sena chief reposes enough trust in her for her to continue influencing his decisions. This proximity was the reason why many saw her as a power centre within the Thackeray household. Till recently, industrialists as well Shiv Sainiks approached her to get a line to Thackeray. And when the Sena was in power she wielded clout at the highest levels of the administration. The question everyone in political circles is now asking is whether she will continue to enjoy the same 'bahu' status after her marriage was annulled by a family court on October 27.

Very clearly, in the Thackeray household, the issue goes beyond Smita's right over the family name. It has to do with a subtle but permanent power shift between Uddhav, Raj and her. If she doesn't have legal status as Thackeray's daughter-in-law and she doesn't live with the family, it is one worry less for Uddhav. He doesn't have to counter her at every step, personally and politically. Besides, she cannot throw her weight behind Raj. The Thackerays would not comment on this but the heightened anticipation of the Jaydev versus Smita battle is evident. The fight has unmistakable public and political connotations for her and the Thackerays.

At the end of the day, whether she stays at Matoshree or not depends on Bal Thackeray. The Sena chief's growing reliance on his youngest son Uddhav in the last two-three years has dented Smita's clout. But she cannot be written off. Uddhav saw her, justifiably, as a potential rival and lost no time in loosening her hold over his father. Now the buzz is that he may use her non-bahu status to alienate her further. Jaydev publicly denouncing his former wife as an opportunist will clearly help Uddhav's cause.

The very thought of Smita continuing to live with her two kids at Matoshree irks Jaydev. "She is obviously encashing on the name," he told Outlook. "She must now stop calling herself a Thackeray because she is not married to me any longer. She is only using the name to mint money. Let her become Smita Chitre again or call herself Smita Ukdive or something. She will be like any of the hundreds of women walking the streets in Mumbai. She won't have the same power, she won't enjoy any clout." His indignation over the use of the name is a ruse to call attention to her power-centre status within the Thackeray family. Smita, meanwhile, chose the more engaging environs of Mahabaleshwar hill station to escape questions and her secretary offered no comments.

The metamorphosis of Smita from a middle-class Maharashtrian girl working as a receptionist in the passport office to wielding tremendous political clout is right out of a Bollywood script. Her influence soared ever since she was estranged from Jaydev in 1995. In fact, she was in her prime when the Sena-BJP ruled Maharashtra between 1995 to 1999. At the pinnacle of her power—that came from her unrivalled access to Bal Thackeray himself—she could call the chief minister of Maharashtra and casually enquire about a particular file. Both Manohar Joshi and Narayan Rane, successive Sena CMs then, have publicly denied this but senior bureaucrats have a different, unflattering story to tell about her undue interests in certain cases. She was, in no small measure, a power centre in the state's most important family.

It was her proximity to Bal Thackeray that also helped her along in her career as a film producer. After her estrangement with Jaydev she opened a boutique of women's wear, then launched her own banner Rahul Productions, and later became the president of the influential Indian Motion Pictures Producers Association (IMPPA). She had big-budget men like Bharat Shah and the Hindujas financing her films. Last year, the big daddies of Bollywood such as Yash Chopra, Subhash Ghai and Dilip Kumar stood by her side as she launched Cinema People's Academy to rival IMPPA and other industry bodies.

Jaydev continues to be intrigued by his former wife's hold on his father. He also can't understand why she chose to stay on in Matoshree when he walked out on his family. Says he: "When I left the house because of family disputes, she should have walked out with her husband. Instead, she chose to live on with her in-laws. That is only because she wanted the power and money that goes with being a Thackeray. Now she has no right to live in that house. Why is she still there? What does she have in that house? It's a question that people should ask. I have suffered and suffered endlessly because of the things that happened but I haven't spoken. I don't want to get into the unspeakable things within our family but isn't it curious that she should be in that house all these years?" The "unspeakable"—her alleged extra-marital relationships—has rankled many in the political and Smita's personal realm, but there is an unspoken ring of silence around it.

Jaydev could, theoretically, talk to his father about what's bothering him. "I didn't want to trouble Saheb," he offers by way of explanation, "so I sent a message through some of his people. I told them what I felt. If nothing happens, I will take the issue to court specifically asking that she is stopped from using the name." It's a threat he is willing to carry out. Legally, Smita is now well within her rights to continue being a Thackeray. "A divorcee or a widow does not mean that the woman must automatically revert to her maiden name. Law does not require it," says noted women's lawyer and activist Flavia Agnes.

The next part of the script will be played out when Smita returns after her chintan session in Mahabaleshwar. Whether she stays in Matoshree or not, by all accounts, she will prefer to continue being a Thackeray.