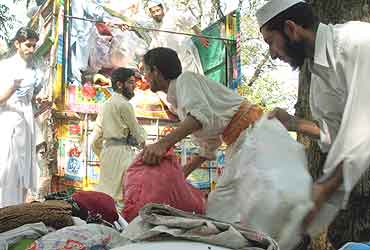 From the rubble of the earthquake have risen proscribed Islamic charity groups, providing relief to a devastated people and riding the tide of gratitude to bolster their image. Three such groups—Al-Rashid Trust, Al-Akhtar Trust and the Ummah Tameer-e-Nau—had been declared as terrorist support organisations by the United States; and their bank accounts frozen by the Pakistan government. But within weeks of the October 8 quake, amid an all-round collapse of the administration, the three Islamic charities have resurrected themselves through humanitarian operations.

No longer are the activities of these charities clandestine, nor are their activists shadowy figures engaged in social welfare. In Azad Kashmir (Pakistan-occupied Kashmir for Indian readers), they have opened relief camps with banners proudly proclaiming their names. Indeed, immediately after the quake, these charities launched a massive media campaign, asking people to donate lavishly. Their volunteers claimed that Islam requires every Muslim to contribute to charity, or zakat (a mandatory 2.5 per cent every Muslim has to pay on their annual savings every year), which is aimed at supporting those striving to promote the cause of Allah.

The response to the appeal was prompt and massive, both in and outside Pakistan: millions of rupees have poured in, and their dozen camps in Kashmir now brim over with relief material. In several remote areas, such as in Balakot and Batgram districts, the volunteers of these charities and other pro-militancy groups have taken a lead over the army in providing succour to the people. 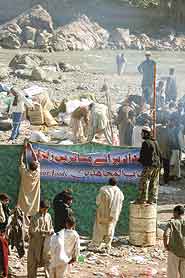 But their dubious past still lurks behind their humanitarian measures in Kashmir. Always flush with funds, these charities had been earlier accused of funnelling donations worth billions to militant groups. American counter-terrorism experts based in Pakistan say Muslim charity organisations have been one of the major sources of funds for Pakistani militants. The advantage arises from the difficulty law enforcement agencies encounter in determining whether the donation is actually being utilised for the originally specified purpose, or diverted to bankroll dubious activities. After US intelligence agencies unravelled that the World Trade Center bombings were financed via funds from a Muslim charity organisation—Alkifah Refugee Center in Brooklyn, New York—they turned the spotlight on Islamic charities worldwide. Their scrutiny resulted in the closure of Al-Rashid Trust, Al-Akhtar Trust and the Ummah Tameer-e-Nau in Pakistan.

The latest activities of these charities have sparked fears of a reforging of ties between Islamic charities and militants. Their symbiotic relationship could empower both. Leading political analyst Dr Hassan Askari Rizvi says both militants and Islamic charities have not only won public sympathy but have also received massive donations. "While their popularity and influence keep soaring, the Musharraf regime appears directionless," Rizvi told Outlook.

In the backdrop of the devastating earthquake, the government perhaps is hamstrung in preventing the proscribed charities from reaching out to people. President Pervez Musharraf said so to a TV channel: "I know that some extremist outfits are participating in relief activities in the quake-affected areas. Their activities are being watched closely.... (But) I am not going to prevent anyone from helping the people." Federal relief commissioner Maj Gen Farooq Ahmed said on October 20, "The government cannot stop anyone from participating in relief activities. At such a critical hour, assistance, offered by even an enemy, should be accepted." Two days later, interior minister Aftab Ahmed Sherpao too admitted, "They (the jehadis) are the lifeline of our rescue and relief work in Azad Kashmir".

How dangerous are these resurrected charities? Take the Karachi-based Al-Rashid Trust, the first of the three Pakistani charities to be outlawed by the US treasury department. Not only was a clear link between the trust and Al Qaeda established, US intelligence says it was involved in the abduction and murder of Wall Street Journal reporter Daniel Pearl. He was held in a two-room hut in the compound of a commercial nursery in Karachi owned by Al-Rashid Trust. It was here that Pearl was gruesomely slaughtered by his abductors.

Founded by Mufti Rashid Ahmed in February 1996, the Rashid Trust was one of the 27 organisations outlawed by the US on September 22, 2001. On the following day, the State Bank of Pakistan asked all banks to freeze the accounts of the trust. American intelligence findings also disclosed that Al-Rashid Trust was Osama's principal source of funds, and was closely linked to the Taliban and the Jaish-e-Mohammed (JeM). The two, in fact, still share office spaces across Pakistan; even their cadres overlap in places.

The Al-Rashid management, however, denies links to Al Qaeda or any other terrorist organisation. Its in-charge in Islamabad, Mohammad Arshad, says its 'welfare' activities include providing financial and legal support to jailed Muslim militants worldwide, and all its activities are purely humanitarian in nature. He says the trust has asked the Pakistan government to de-freeze its accounts so it could resume its welfare activities. 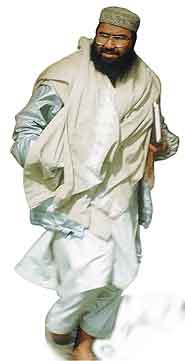 Subscribing to the Deobandi school of thought, Al-Rashid Trust endorses jehad in such places where it perceives the community of faithful is being oppressed. One of its booklets, written by Mufti Rashid Ahmed, states: "The holy war is an essential element of Islam. Every Muslim must carry the weapons, even within the mosque, if the need is felt to fire on a non-Muslim." Its other objectives include 'cleansing' the media of pornography, and publishing books to engender in the people the fear of the Last [Judgement] Day. Its instruments of propaganda are a private radio station and two newspapers—Zarb-e-Momin in Urdu and Dharb-e-Momin in English. These two papers feature reports on the jehadi activities of the Taliban and the JeM. During his detention in India, JeM chief Maulana Masood Azhar used to send articles secretly to Dharb-e-Momin.

The Karachi-based Al-Akhtar Trust was designated by the US treasury department as a terrorist support organisation on October 14, 2003. But the ban doesn't seem to have dampened the enthusiasm of its director, administration, Zahid Ahmed Khan. He told Outlook, "All our operations are being carried out according to normal routine and from the same platform—Al-Akhtar Trust. We're not afraid of anyone except God and we're not going to change the name of the trust. Despite the US action, the Pakistan government has not imposed any restrictions on our working. May Allah show the right path to those accusing us of backing terrorists."

Contrast Khan's claims to those of the US. On October 14, 2003, US treasury department secretary John Snow had stated: "Today's designation strikes at the life-blood of terrorists—the money that funds them. Shutting down the (Al-Akhtar) Trust will cripple yet another source of support for terrorists and possibly help undermine the financial backing of terrorists staging attacks against American troops and Iraqi civilians in Iraq." The executive order banning Al-Akhtar Trust claimed it became a front for the activities of Al-Rashid Trust after it was banned in 2001.

The US treasury department chargesheet also accused the trust of financing and assisting the Taliban in Afghanistan. "As the US launched Operation Enduring Freedom on October 7, 2001, reports started pouring in about Al-Akhtar Trust secretly treating wounded Al Qaeda fighters at its medical centres in Afghanistan and Pakistan. " Not only this, it also allegedly supported many of the Pakistan-based jehadi groups, including the Lashkar-e-Toiba and JeM, both responsible for a string of terrorist attacks in India. 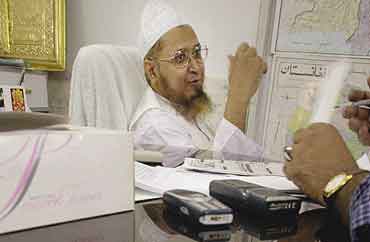 However, Al-Akhtar president Maulana Mohammad Mazhar insists his is purely a welfare and charity organisation, and the US sanctions are based on misinformation. "Neither Al-Rashid nor Al-Akhtar had any connection with Osama bin Laden or his network." But he said his organisation did not discriminate among people in serving humanity. "While treating injured people, we are least bothered to see to which organisation or faith the patients belong to," he said. Its vice-president, Maulana Mohammad Ibrahim, admitted that the trust was carrying out humanitarian relief work in Afghanistan but only in those areas where the Afghans are in dire need of basic necessities of life.

The third Al Qaeda-linked banned charity active in running relief camps in Kashmir is the Ummah Tameer-e-Nau (UTN), or Reconstruction of the Muslim Ummah, which is led by Pakistani nuclear scientist Sultan Bashiruddin Mahmood. The aim of the organisation, launched in 2000, is to conduct relief and development work in Afghanistan. The charity was founded by Mahmood after he left the Pakistani Atomic Energy Commission, criticising the government's decision to sign the Comprehensive Test Ban Treaty. 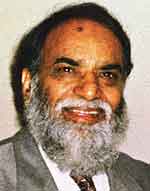 Shortly after the US attacked Afghanistan, the Pakistani authorities detained Mahmood and other UTN board members amid charges that they were involved in assisting Al Qaeda in its quest to acquire nuclear and biological weapons. On December 20, 2001, the US government placed them and their organisation on its list of individuals and organisations supporting terrorism. President George Bush ordered the freezing of the assets of the organisation as also of its three key directors—Sultan Bashiruddin Mahmood, Chaudhry Abdul Majeed and Sheikh Mohammed Tufail (the other two were also nuclear scientists).

Then the White House had distributed a fact-sheet alleging that the nuclear scientists had close ties to bin Laden and the Taliban; that during their repeated visits to Afghanistan, they met bin Laden, other Al Qaeda leaders and Mullah Mohammad Omar to discuss the development of chemical, biological and nuclear weapons; that Sultan Bashiruddin had provided information about the infrastructure needed for a nuclear weapons programme and the effects of nuclear weapons. The fact-sheet further said that after the fall of the Taliban regime, searches of the UTN premises in Kabul yielded documents outlining basic scientific know-how related to nuclear weapons.

The earthquake may have ravaged large parts of Kashmir. But it has also buried the dubious past of these charities, inspiring them to rebuild and reinvent themselves.