It’s not top-down, hierarchical decree that erases dissent in the Sangh—it’s inner cohesiveness. Every voice is heard, every opinion respected in its collective decision-making. 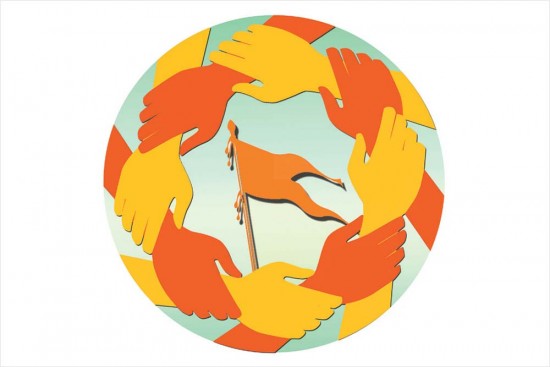 The tradition of Sangh pracharaks entering different fields of social life has continued since early ’50s. Deendayal Upadhyaya (politics), Dattopant Thengdi (labour union) and Eknath Ranade (social activist) are some early examples. On the other hand, Madandas Devi, Dattatreya Hosabale, Sunil Ambedkar spent their formative years in the ABVP and then took important responsibilities in the Sangh. Others, like Ramlal, returned to the Sangh after spending some time in politics. All these changes were part of a natural transition. There are many reasons for these changes to have been executed so smoothly. First of all, the Sangh has always nurtured collective leadership. Its leadership meets every month to discuss everything threadbare. While hierarchy is important, it doesn’t impede free-flowing and frank discussion. Deoras had famously described his colleagues as “those even God would be envy of”. In the Sangh scheme of things, consensus building is essential before any major decision. That makes the decision-making process slow, sometimes too slow, but it does involve all stakeholders. Disagreements are not only discussed and debated, but also respected. Therefore, once a decision is arrived at, there is no looking back. Secondly, a difference of opinion is not allowed to have a cascading effect, resulting into a clash of personalities. In 1939, RSS founder Dr Hedgewar called for a meeting of key associates at Sindi, near Wardha in Maharashtra. His health was failing. M.S. Golwalkar was relatively junior, and younger, among all the attendees. He presented his views on a certain topic, which were quite contradictory to that of one of the seniormost persons present, Appaji Joshi. Both argued a lot. During the same meeting, Hedgewar had a private discussion with Appaji Joshi about his successor as secretary. Hedgewar asked Appaji his opinion about Golwalkar as likely successor. Appaji instantly endorsed his name. The rest is history.

One Never Quits The Sangh