More highways at what cost? How the PPP model is at odds with the land. 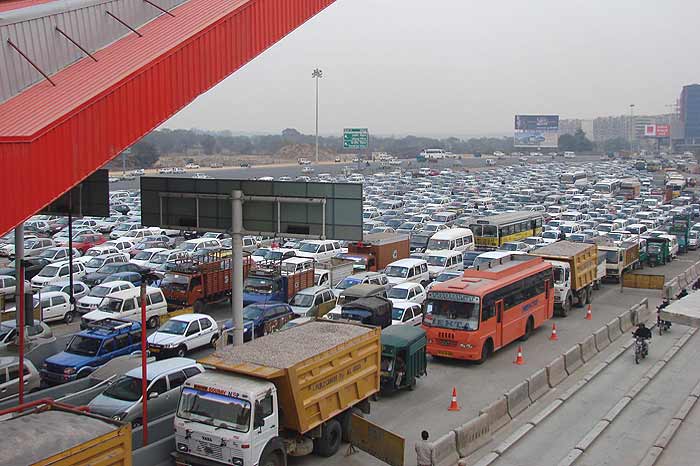 The Tolls Toll For Whom

In the last few months, India’s national highways have seen much unusual activity, including a spate of spontaneous protests throwing traffic and life out of gear for commuters. In January alone, the Delhi-Jaipur highway on NH-8 saw three major pickets by old-time residents of Gurgaon and the neighbouring villages of Kherki Dhaula near Manesar. Once northern India’s showcase highway (a Delhi-Jaipur trip, in less than four hours, used to be a cruise), it’s now a travellers’ nightmare given the traffic snarls close to Delhi and Gurgaon. Those who regularly trawl other spanking new highways too are no strangers to this stop-go phenomenon.

What links the protests is the ‘toll issue’—not just the amount, which is steep in some stretches, but also the lack of transparency and circumvention of rules by concessionaires or private firms who built the roads under various public-private-partnership projects. Try to square this with the actual experience of users—worn-out and uneven stretches, traffic congestion and accidents, frequent stoppages for work on sections adding to the chaos, lack of highway facilities promised under the deal signed between the private contractor and the government—and you can begin to understand the nature of grievances. With the highways passing through, life at the many villages en route has also turned a bit hellish. “None of the promised facilities like service lanes, foot overbridge, underpass and flyover have been provided... 245 people were killed last year alone,” says Col (retd) K. Bharadwaj, chairman of the Toll Hatao Sangarsh Samiti, a Gurgaon-based group active in the protests.

Former surface transport minister Kamal Nath’s dole of 50 per cent concession in toll to villagers affected by the highway projects did go some way as appeasement but it’s clearly not enough. As Bharadwaj points out, villagers are not against toll payment. What they find unacceptable is the almost two hours it takes to clear the toll plaza during peak hours. “What was promised was uninterrupted traffic flow...we are just facing too much hardship,” he says. Bharati Arora, DCP traffic, Gurgaon, agrees that the quality of service, road maintenance etc provided is very poor with little or no provision for ambulances and other essential services on the highway. In fact, the Gurgaon traffic department has complained several times to Delhi-Gurgaon Expressway concessionaire DS Constructions and the NHAI (National Highway Authority of India). 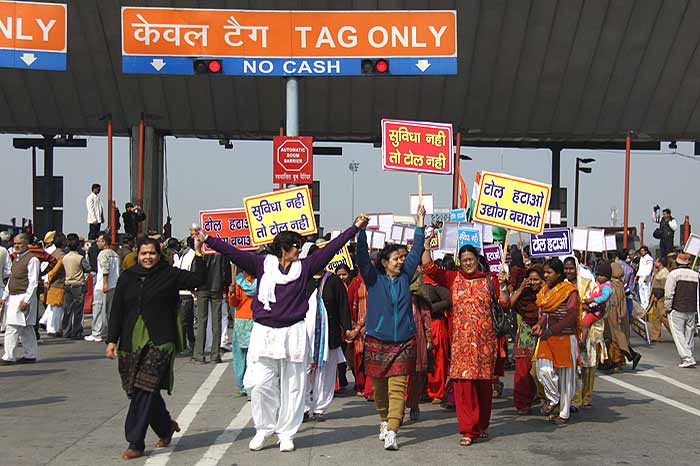 Women protest at the toll booths. (Photograph by Manoj Kumar)

“Inconvenience is one issue, paying toll is another. You cannot alter the terms and conditions of the model concessionaire agreement (MCA), which was considerably amended in 2008,” says the present Union surface transport minister Dr C.P. Joshi. Having made a start with e-tendering for highway contracts (with encouraging results), Joshi is now looking forward to IT interventions through the RFID tag system and cloud computing to ensure smooth flow of traffic through toll plazas across the country. The first pilot project commenced this week.

“Inconvenience is one issue, paying toll is another. You can’t alter the MCA terms...and anyway it was amended in ’08.”
Dr C.P. Joshi, Union surface transport minister

The minister admits that the current MCA does have some grey areas, like the provision to collect toll even before work has started for expansion of four-lane highways to six-lane ones—one reason for the protests by residents and taxi/ lorry associations in February at various points near Trumpet Bridge en route to the Bangalore International Airport. “We realise that people are agitated over the MCA provision allowing the concessionaire to collect toll from the day the contract for expansion of four-lane to six-lane is awarded. That is one issue we will be addressing,” Joshi says.

Despite the MCA amendments—after three-years of deliberations and the B.K. Chaturvedi committee report—many non-transparent aspects have remained: like the toll amount collected and why contractors are allowed to recoup several fold their investment over 15-25 years without providing quality service.

“Initially, quality roads and safety features are provided but gradually the concessionaires ease off on maintenance, the road signages disappear, the crash barriers wear out and the potholes become permanent,” says Chandmal Parmar, member of the steering committee of the road transport ministry and an expert on prevention of road accidents. A strong voice among protesters of the high toll on the Mumbai-Pune section of NH-4, Parmar points out that as against 73 paise per km prescribed by the NHAI, the state charges anywhere up to 90 paise/km.

Over distances, that hurts. Cars have to pay Rs 170 to do the 93 km Pune-Mumbai national expressway, while NHAI charges Rs 90 for the same distance between Baroda and Ahmedabad on NH-1.

Opponents of the toll system point out that while the NHAI and transport ministry award road construction and maintenance contracts for 15-25 years, at the state level toll collection periods keep increasing due to the concessionaire-neta nexus. A case in point is the Pune-Ahmednagar state highway where no return ticket or monthly/weekly pass is provided and toll collectors show only 50-60 per cent collections, says Parmar.

Many other ambiguities exist in the MCA too, leaving lots of room for rules to be bent, like allowing a toll plaza within city limits. In Kolhapur city, mass protests were held and seven toll booths damaged over the decision to permit concessionaire irb to collect toll on the Kasabavada suburb road, while in Raipur, month-long protests were held against DS Constructions (operator of the Delhi-Gurgaon expressway too) for trying to set up a toll plaza in a residential area, Sundar Nagar, without permission.

Batting for the ppp-based pay-and-drive projects, highways secretary A.K. Upadhyay says the reluctance to pay toll comes from people being habituated to not paying for such services. On the issue of toll rates rising despite dipping road quality, he promises action will be taken as and when instances are brought to the ministry’s notice. Naveen Gupta, secretary of the All India Motors Congress (AIMC), says the flaw lies with the government as the system penalises trucks with less than permissible loads but lets overloaded ones through. “Toll has become a headache for transporters...it adds 25 per cent to operation costs,” he says. To tackle the constant harassment, the AIMC has been asking for tolls to be replaced by a Rs 30,000 annual fee per truck.

This is not unreasonable, considering Kamal Nath’s own admission that there was over 15 per cent leakage in toll collection. The figures can be mind-boggling, given that the Pune-Mumbai expressway toll plaza itself reportedly has a daily collection of Rs 1.42 crore.

So far, only a few states like Tamil Nadu, Andhra Pradesh, Kerala and Gujarat have taken action on citizen’s protests by stopping toll collection (for 1-6 months) till services improved. Other states may follow suit soon. But with a cash-strapped government depending on private investment to deliver roads, rural folks also may soon have to pay for using roads that promise more than they deliver.

View From A Pillbox