Round One: All Square

With Bihar set for another election, the UPA closes ranks, the NDA rues its chance, while Paswan's still the joker in the pack Updates 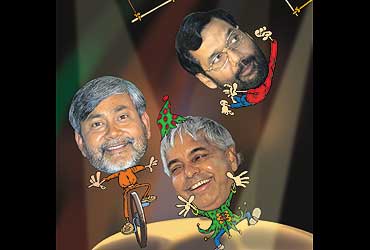 outlookindia.com
-0001-11-30T00:00:00+0553
As the Congress sees it, the dissolution of the Bihar assembly last fortnight gives the UPA a second shot at forming a government in the state. Crucially, it also provides its constituents an opportunity to learn from mistakes made in the February elections. Even if Governor Buta Singh's dissolution decision has become controversial, politically, it would appear to be a practical line of action given the Congress' dependence on its largest ally, the 24-member Rashtriya Janata Dal (RJD), at the Centre.

But if the RJD is to make it this time it will have to ensure a perfect alliance with its UPA partners and better candidate selection. A look at the February results demonstrates that though the RJD went virtually alone, it polled 25.07 per cent of the votes. More than 10 per cent ahead of its nearest rival, the JD(U), which secured 14.55 per cent. Its ally, the BJP, polled 10.97 per cent.

This time, if the Congress ties up with RJD, its 5 per cent votes would put the RJD-Congress combine at 30.07 per cent. Ahead of the JD(U)-BJP's total voteshare of 25.52 per cent. If the two Left parties—the CPI and CPI(M)—and the NCP go with the RJD-Congress, that would be another 3.2 per cent. And if this combine can attract the bsp, which has 4.4 per cent, it would be an added bonus. Clearly, in the minefield of Bihar elections alliances are critical.

The BJP-led NDA—going by the noises it is making—thought it had all but formed a government in the state when the assembly was dissolved. This despite the fact that even hours after the dissolution, JD(U)'s Nitish Kumar—the NDA's CM-designate—was unwilling to go on record on how many of Ramvilas Paswan's LJP MLAs had pledged their support to him. His reply: he did not wish to go into the numbers as a majority was supporting him. But Paswan had paraded 10 MLAs on May 22, while four other jailed LJP MLAs were still undecided. The remaining 15 don't make the two-third majority the newly amended anti-defection law prescribes as a requisite step to form a new party. 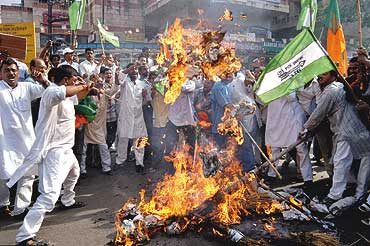 Clearly, this time if the NDA cannot rope in Paswan as part of its alliance, it won't be able to improve its voteshare. But it was Paswan's inability to decide between the UPA and the NDA that made government formation impossible in Bihar without the 'horse trading' Governor Buta Singh cited in his report for recommending dissolution. Incidentally, this was the position that had been taken by the Left parties after the initial efforts in February to form a government failed.

Today, with a fresh round of polls due if not by November this year, certainly before February 2006, Paswan stands exposed, but not chastened. If he does not want to contest along with other UPA allies because of his blind hatred for union railway minister Laloo Prasad, he is unwilling to throw in his lot—openly—with the NDA, because he wants to keep his central berth. He said recently, "I...made some mistakes in distributing tickets. The NDA had infiltrated my party to contest assembly polls...they...(have) deserted me. I will consolidate my Dalit-Muslim votebank and decide on alliances only at election time." Interestingly, while most of those who won on the LJP ticket were upper castes, not one was a Muslim.

Both the UPA and the NDA regard Paswan as the 'spoiler'. In BJP general secretary Arun Jaitley's words: "Paswan thought he was the kingmaker—instead, he walked into a royal trap." Or as Laloo put it, "The LJP is defunct now with its MLAs betraying Paswan...we can only mourn the party's death."

But while Paswan remains confused, Laloo sees things more clearly now. If he admitted soon after the February polls that he had "many mistakes", today, he is willing to work towards a "perfect understanding with UPA allies, including the Congress, CPI, CPI(M) and NCP and give them more seats to counter the communal and fascist forces in Bihar". RJD sources added, this time, he will keep his brothers-in-law at bay, too.

RJD leader and union rural development minister Raghuvansh Prasad Singh says, if with its UPA allies, "the principle of distributing seats on the basis of who stood first or second (where one of us has not won a seat) is adopted, a good beginning can be made. The other seats could be divided keeping in mind that even though we are the largest party, the distribution should not appear to humiliate any ally."

For the Congress, under fire for its 'dual understanding' with the RJD and the LJP last time, this is the opportunity to redeem itself. Recently, Congress president Sonia Gandhi, while admitting publicly that the party had erred in Bihar in the assembly elections, said she was an "optimist" about elections whenever they are held, an indication that she is in a mood to copy the 2004 'grand alliance' formula.

Says party general secretary Ambika Soni: "The Congress president has authorised some of her senior colleagues to talk to like-minded parties in Bihar and has sought feedback from party colleagues. While the final strategy is yet to be drawn up, the effort will be to consolidate all the secular forces." Evidently, Union HRD minister Arjun Singh and senior Congress leader M.L. Fotedar will no longer be the be the chief architects of the Congress line.

The NDA's battleplan will focus on the UPA's "bodyblow to democracy"—as former PM A.B. Vajpayee put it—through demonstrations, a rally in June and legal action. It will continue to harp on 'the 15 years of jungle raj' theme. Jaitley, who'll again be in charge of the polls, says, "It'll be payback time for Laloo. The most backward castes (MBCs) and the upper castes will vote with a vengeance against him." The BJP, he says, would give many more tickets to the MBCs this time. As for an electoral alliance on the ground, the NDA cannot better what it did in February.

If the MBCs and the uppercastes do turn out en bloc for the NDA, what of the other side? Will Laloo be able to retain his hold over the Yadavs, Muslims and the non-Paswan Dalits? Reports suggest that in the February elections, there was a lack of enthusiasm for the RJD among its chief supporters. While the Yadavs now don't want to risk an NDA government, there is still a certain ambivalence among the Muslims. With Bihar having been riot-free for so long, many don't see it as a battle between secularism and communalism.

Says Meraj Anwar, a madarsa teacher in Gaya: "If Laloo thinks Muslims will readily return to his fold, he is wrong. We are prepared to go on our own and build an alternative." Brave words, as no Muslim alternative has come up anywhere in the country. But it is nevertheless an indication of unhappiness with the RJD, made clearer when Anwar stresses that in the last election, Yadavs worked openly against the RJD's Muslim candidates.

The RJD leadership will have to work hard to clarify any doubts that Muslims may be nurturing. For the present, RJD leaders are saying that the Muslims have realised their 'mistake' in just three months. The party's Khurshid Siddiqui says that only a small section of the community had distanced itself from the RJD but having seen that it benefited the NDA, don't want to take a risk again.

Meanwhile, who'll mourn for the 146 first time MLAs—in a house of 243—who are reeling under debts incurred in their campaign and are yet to get their mortgaged lands released? Most are not in a position to contest again. And these are not just independents. There are RJD MLAs who have mortgaged their land. Many of them may not get tickets this time. But as Bihar gets into election mode there will be no dearth of ticket seekers.

Smita Gupta In Delhi And Faizan Ahmed in Patna