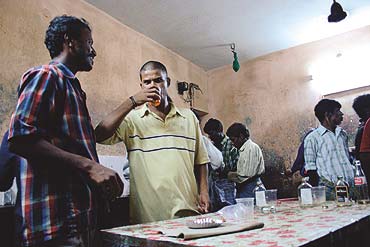 Both retail and wholesale vending of liquor in the state is controlled by the Tamil Nadu State Marketing Corporation Limited (Tasmac), launched in 1983. During MGR's chief ministership, the state decided to control all wholesale vending of India-Made Foreign Liquor (IMFL). In October 2003, the J. Jayalalitha government took over retail vending as well, ostensibly to put an end to the "cartelisation in the liquor trade". The M. Karunanidhi-led DMK government has found no reason to reverse the policy since revenue from the sale of liquor has broken a 23-year-old record.

Before the takeover, Tasmac's turnover was Rs 3,499 crore. In 2005-06, with 6,697 retail outlets of which 2,963 have bars attached, its turnover has increased to Rs 7,335 crore: a growth rate of 110 per cent. Tasmac's phenomenal success has come despite its policy of selling only those IMFL brands that are brewed or distilled in the state. So consumers have access to Brisnoff vodka manufactured by Shiva Distilleries in Coimbatore, but not to Smirnoff bottled in Aurangabad. None of the international brands bottled in India can be retailed in TN. Pubs and bars have to procure premium brands and imported liquor from bonded warehouses in Mumbai or Delhi. For this, a bar has to make an indent with Tasmac and apply for a transport permit (TP). And Tasmac can take months to clear the permit. The result: even star hotels do not have adequate supply of quality liquor. And if a state does not deal with the wholesale supply of a brand, it has to be imported with all the extra duties and taxes, duly passed on to customers.