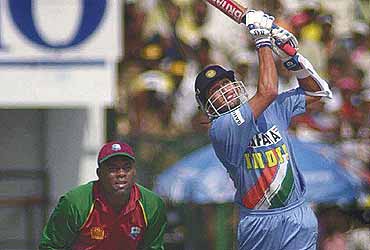 outlookindia.com
-0001-11-30T00:00:00+0553
Ganguly’s gamble almost paid off. But for the last ball of the day of the first odi at the Keenan Stadium in Jamshedpur. He sent in Ajit Agarkar at the No. 3 position and the Mumbai lad rose to the occasion to hit a career-best 95. He came in to bowl the last over and almost did well but for the full toss that Ramnaresh Sarwan, the other hero of the match, dispatched to the cover boundary to wrest the issue.

Yet, just 15 minutes earlier, the West Indies thought the match was theirs as an abandonment seemed inevitable when spectators threw plastic bottles and other missiles onto the field. But the Caribbean determination prevailed and they overcame a formidable Indian total of 283 for six and a hostile crowd to pull off a thrilling win.

With the West Indies needing 13 runs from the last three overs to win, a section of the crowd held up the game. Sarwan and Shivnarine Chanderpaul had just belted 17 runs off the 47th over to take the West Indies within 13 runs of the target when the capacity 20,000 crowd turned restive. Match referee Mike Proctor took the teams off the field. Carl Hooper’s men were 17 runs ahead of the Indians on the Duckworth/Lewis scoring system at that stage and no further play seemed possible with light fading rapidly. Even as the official broadcasters announced the abandonment of the match and West Indies being declared winners, sanity prevailed among the spectators and the two teams came out to complete the remainder of the match.

What followed saw an incredible comeback by India as Ashish Nehra gave away just one run in the 49th over while claiming the wicket of Shivnarine Chanderpaul which left West Indies requiring six runs from the last over.

"I was looking for him (Agarkar) to bowl a yorker and I thought I will hit him in the covers," Sarwan, later declared man of the match for his unbeaten 83, said.

Sarwan’s knock eclipsed a fine innings by team-mate Wavell Hinds who kept his side in the hunt through the innings with a brilliant 93. Hinds laid the foundation of the West Indies run chase in a 86-run second-wicket stand with Marlon Samuels who came up with a sterling 51.

Earlier, India elected to bat and overcame the early loss of openers Virender Sehwag and Saurav Ganguly to post a good score on a pitch that had been the subject of intense discussion before the match.

Agarkar and V.V.S. Laxman put on 98 runs for the third wicket. Agarkar found another fine partner in Rahul Dravid, who remained unbeaten on 46, and the two continued to score at a very decent rate. Agarkar smashed 11 fours and two sixes in his 102-ball knock as he ensured that India did not miss the services of Sachin Tendulkar.

Agarkar, who came tantalisingly close to scoring his maiden one-day hundred, was finally out as the fourth wicket when he gave a simple catch to Chris Gayle off Pedro Collins. Collins was the pick of the West Indian bowlers, finishing with two for 40 off his 10 overs.

Inspired by his batting performance, Agarkar made the first breakthrough for India, luring Chris Gayle into a loose drive to mid-off in the sixth over after putting on 28 for the first wicket with Hinds. But Hinds and Samuels put up a determined partnership that not only prevented quick loss of wickets but also produced runs at a brisk rate. The two scored at more than the required run rate to lay a sound platform for the West Indies.

Both of them played the spin duo of Anil Kumble and Harbhajan Singh very well. The battering that the two spinners took reflected in their figures. While Kumble finished with one for 48 from seven overs, Harbhajan went wicketless in his nine overs and conceded 68 runs. Ganguly was completely disheartened by their performance but tempered his criticism by saying that "they can have bad days". The most impressive of the Indian bowlers was part-time spinner Sehwag who claimed one wicket for 37 runs from his quota of 10 overs.

Hinds, who was dropped by Kaif on 89, however, could not complete a well-deserved century and was caught behind by Dravid off Nehra. Hooper was out cheaply for four but Sarwan and Chanderpaul batted with a lot of grit to bring their side within sniffing distance of victory.

A total of 283 should have been enough, considering no team had ever successfully chased more than 265 here. But the West Indian batting was as wonderful as the Indian bowlers were poor. Another last-ball thriller for the West Indians, only this time they didn’t choke. If anyone deserved to choke/be choked, it was those miscreants pretending to be fans. Proctor said the crowd trouble would be reported to the ICC. That’s a good enough warning for the ‘fans’ at the rest of the odis.