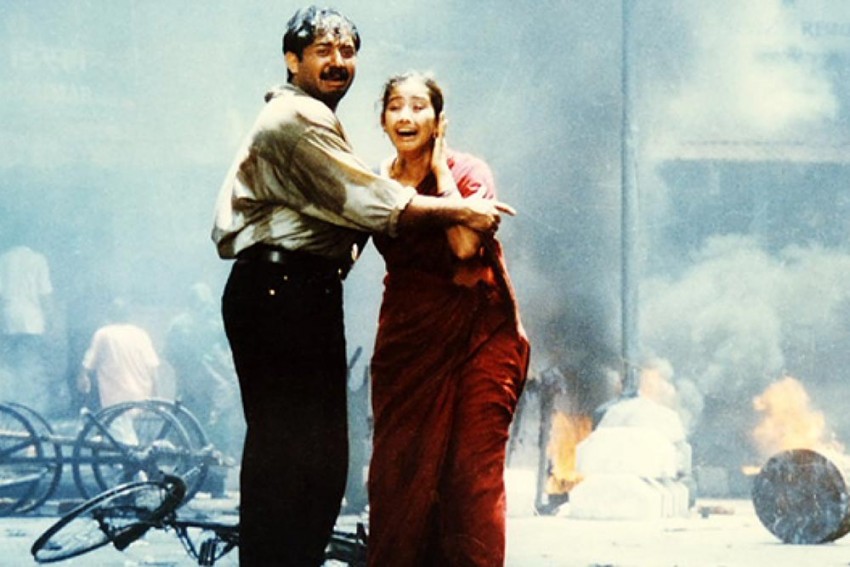 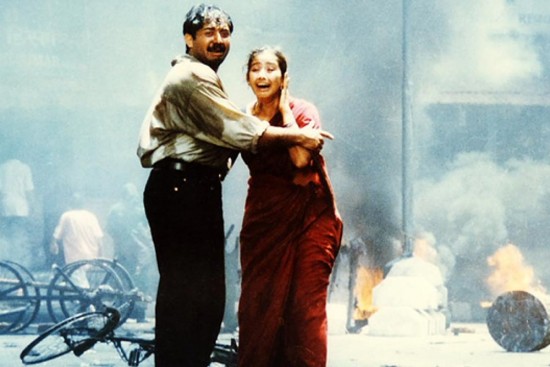 Ever since Mani Ratnam skilfully crafted a Hindu-boy-meets Muslim-girl-romance in the backdrop of the Mumbai riots in his 1994 epic, Bombay, Bollywood has never really tired of this theme, repeating it ad nauseam film after film.

But the latest film on the theme, Game of Ayodhya—scheduled to release this week amid mounting controversy—seeks to reprise the same old tale in a new package, drawing heavily from the report of the Liberhan Commission, which was set up to probe the Babri Masjid demolition in 1992.

A judicial commission report may not usually interest an ­average filmmaker per se, but the 1,029-page tome submitted by Justice (retd) M.S. Liberhan to the central government in 2009 has inspired a politician-turned filmmaker from UP to make a feature film that mines recent political history for drama.

Produced and directed by Sunil Singh, Game of Ayodhya, starring Makarand Deshpande, Aroon Bakshi and Singh himself, in pivotal roles, is scheduled to release on December 8, two days after the 25th anniversary of the demolition in Ayodhya. “My film is based on true events as mentioned in the Liberhan Commission report,” Sunil Singh tells Outlook. “We have not tweaked the facts and have used real-life footage featuring leaders such as Atal Behari Vajpayee, L.K. Advani, Murli Manohar Joshi, Uma Bharati and others in it.” Sunil Singh says he has made this film primarily to make the younger generation aware of an important event which altered the course of politics and history of the country. “Twenty-five years have passed since the shrine was demolished but those born after 1992 do not know much about the circumstances leading to the demolition, or for that matter, the conspiratorial game played behind it and the key people involved in it.”

Moreover, according to Singh, the events leading to the demolition had enough dramatic twists and turns, much like a fast-faced movie script. But choosing a sensitive subject may well be tricky, as he has discovered. Like Sanjay Leela Bhansali’s Padmavati, Game of Ayodhya has kicked up a storm with the activists of a few right wing outfits, who have accused Singh of distorting facts about Ramjanmabhoomi. After watching its trailer, they recently vandalised Singh’s house in Aligarh and announced a cash bounty on the filmmaker’s head. Singh trashes these allegations. “My film has shown the facts just the way they have been mentioned in the Liberhan Commission report. I have not taken any side. Moreover, it has been cleared by the censor board tribunal without any cuts,” he avers.

But getting clearance from the censor board, says Singh, was not easy in the first place. The board refused to pass it anticipating trouble because of its subject. “After being denied the certification, I had to move the Film Certification Appellate Tribunal (FCAT) which finally passed it,” he says. “It is finally being ­released now and I am not at all intimidated by the goons and protesters trying to stall it.” (Clockwise from left) Poster of the upcoming Game Of Ayodhya, Stills from Muzaffarnagar: The Burning Love; and the Bhojpuri film initially titled Babri Masjid

Veteran actor-singer Aroon Bakshi, who plays a Muslim character in the film, feels it’s extremely brave of Sunil Singh to have made such a film. “Given the sensitive nature of the subject, we were apprehensive about whether the film would ever see the light of day. But it has evolved into a very good movie which spreads the message that India should move on from the time Babri Masjid was demolished.”

Bakshi says that a love story of a Hindu boy and a Muslim girl also runs parallel to the true events. “It’s not like a documentary. It tells the story of a young couple caught in the vortex of communal violence in the wake of the Babri Masjid demolition,” he says.

Some impute a political motive to Singh’s decision to make this movie, accusing him of deriving mileage since he heads a political outfit, the Lok Dal. But Singh, a former legislator in UP, refutes the charges. “The idea to make this film came to me when I was attending a film festival in 2010. When I was told that no Indian film had ever won an Oscar award, I wondered how we could hope to win an Oscar when we have fought shy of making a film on our most controversial subject—the Babri demolition—all these years.”

Singh, who plays a journalist in the film, says he did extensive research before launching his venture. “Among other things, Game of Ayodhya chronicles the circumstances under which the BJP transformed from a two-MP organisation to a majority party in Parliament. But the Congress has also not been spared for its role in the run-up to the demolition,” he says.

Interestingly, earlier this year, a Bhojpuri movie (Babri Masjid)—allegedly made “with the blessings of Samajwadi Party leaders”—also had a prolonged run-in with the censor board. Its director, Dev Pandey, says that the movie, starring Khesarilal Yadav, a popular actor of Bhojpuri cinema, could be released only after a change of its title. “Babri Masjid was finally released as Hum Hai Hindustani after 22 cuts and yet, it went on to do good business in August this year.”

Some impute a political ­motive to Sunil’s decision to make Game Of Ayodhya since he heads a political ­outfit, the Lok Dal.

Pandey, however, reveals that the film was made for a poli­tical reason and was initially supposed to release before the UP assembly polls. “The mahurat of the film was held with much fanfare at Etawah in the presence of Samajwadi Party leaders including Shivpal Singh Yadav. The trailer of Babri Masjid was passed with the same title before the polls but it ultimately ran into problems with the censors. After the Samajwadi Party’s defeat in the elections, the people behind the movie lost interest and it was finally released with a fresh title.”

He says Babri Masjid was about a Muslim girl whose Hindu husband is killed by fanatics a day after the Ayodhya demolition. “She raises her son neither as a Hindu nor as a Muslim,” Pandey says. “We had used factual references about the demolition in the original film but most of them had to be snipped. You can still see in the revised movie certain characters resembling a few politicians who had played a key role in the Ram­jan­mabhoomi movement. But, on the whole, it was more like Mani Ratnam’s Bombay.”

In fact, Bombay, which had Manisha Koirala and Arvind Swamy in the lead, was the first major film to have tackled the controversial theme against the backdrop of the Mumbai riots which took place a few months after the Ayodhya demolition. Its success has since spawned several movies in different languages, including Saeed Mirza’s Naseem (1995), Black Friday (2007) and Striker (2010), besides a few in other languages like Daivanamathil in Malyalam (2005) and Danny Boyle’s Academy award winner Slumdog Millionaire (2008).

Movies on riots, whether depicting the post-Partition era or the recent communal flare-up in Muzaffarnagar, have inva­riably courted controversies. Even last month, the UP and Uttarakhand administration allegedly did not allow the screening of Muzaffarnagar: The Burning Love, which was again based on a love story of a Hindu boy and Muslim girl against the backdrop of the 2013 communal violence in the western UP town. The filmmakers had to move the Supreme Court accusing the two governments of having imposed an “unofficial ban” on his film in several districts despite the fact that it had been passed by the censor board.