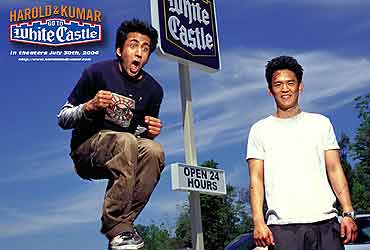 outlookindia.com
-0001-11-30T00:00:00+0553
It took a 'stoner' movie to break the Hollywood stereotype of Indians and race along a weed-inspired adventure where the desi is not a nerd, nor a 7/11 clerk, or even a motel owner. Kumar Patel is a regular dude, hungry for 'chicks' and hamburgers, and whip smart to the stereotyping of Asians like him by Whites in real life. He is a slacker, not a certified scientist at NASA. And he is the hero of the film along with his Korean American buddy Harold Lee in another myth-shattering role. The movie has so many "oh yeah" moments that incredible as it may seem, one has to give full-throated cheers to a little known but much derided director with one no-brainer film to his name and two Jewish-American script-writers who have done what the mega moghuls of Hollywood failed to for so long. And they do it with a comedy which handles racism more subtly than many, many big budget offerings.

Harold and Kumar Go To White Castle makes cinematic history as the first mainstream film with not one but two Asian leads as real as any other twentysomething growing up in suburban America. They're your normal girl-obsessed, foul-mouthed, junkfood-chomping, TV-sedated young men who sample a largish slice of life one night as they go in search of White Castle, a fast-food chain whose square-shaped burger 'sliders' they crave for in a desperate attack of the munchies. They face off 'extreme' sports-punks, racist cops and a Jesus freak who likes group sex. They even ride a runaway cheetah—whether summoned by fumes of grass or otherwise is not clear. The movie has fun with the predictable—Kumar's father and older brothers are doctors who berate him for not being one while Harold's Korean fan club from Princeton imagines him as a Wall Street god, not a reefer-smoking, tongue-tied guy who can't ask a girl out.

It's a genre movie, one that may develop a camp following with niche theatres playing it at midnight for months for repeat watching. But Harold and Kumar has already done something important—helped break down another wall for Indian Americans. So far Indians have been big behind the camera—Shekhar Kapur, Mira Nair—or in tired itty-bitty roles but with this one, they come in front. About time, as at least one Hollywood biggie realised. New Line Cinema funded Harold and Kumar with a decent $9 million and spent generously on publicity. Other studios had liked the story but wanted changes. One wanted the pair to be an African American with either a white guy or an Asian along the lines of Lethal Weapon. A formula known to work. Yawn.

But script-writers Jon Hurwitz and Hayden Schlossberg, who grew up in New Jersey around Indian Americans, refused to compromise and stuck to their chillums. According to director Danny Leiner, who until now was known only for the eminently forgettable Dude, Where's My Car?, studios are waking up to the idea of casting non-whites in real roles, specially in movies made for the younger set which is less mired in prejudice. Harold and Kumar opened last weekend alongside Manoj Night Shyamalan's The Village, the established writer and director of spooky endings, making the Friday quite special really. It's another matter that many Indians will have trouble digesting Kumar's hedonistic pursuit of happiness.

Kumar, played effortlessly by Kal Penn, who was born Kalpen Modi, is the smart aleck roommate of Harold, portrayed by John Cho, an investment banker who works hard and worries a lot. Besides the apartment, the two share buddy chemistry and a love of pot. Kumar's trying hard not to be a doctor, sabotaging interviews by answering his cell and planning his next high. Penn's worked in about 20 films but in tiny and stereotypical roles. But here he's a fully carved character with laugh-out-loud lines. The good news: even the critics are laughing and praising the social commentary slathered throughout. Like ketchup on a good hamburger.