As the jungle eats into a plush haven of art, and court cases drag on, a lustrous legacy faces doom 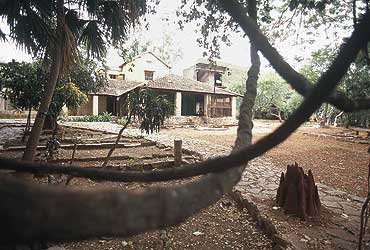 outlookindia.com
-0001-11-30T00:00:00+0553
There's one shrine every Russian tourist to Bangalore unfailingly pays homage to—the home of their cultural icon Dr Svyatoslav Roerich, painter and Orientologist. The sprawling 486-acre Tataguni Estate—housing a priceless collection of paintings, artifacts, antique idols, jewellery, gold coins and animal hides—should have been a monument to Russia's cultural ambassador and his actress wife, Devika Rani. Instead Russians return bleary-eyed after seeing the appalling disintegration the couple's legacy has been subjected to.

Ant-hills dot the path to the couple's farmhouse. The roof has caved in at many places, windowpanes are broken, the verandah cobwebbed and musty. Doors and windows are sealed, but fissures allow a peep into the Roerichs' classy lifestyle that now lies in complete disarray under a coat of grime: antique furniture, mattresses, carpets, wine glasses, curios and classic cutlery.

The disregard is most obvious in the studio abutting the house where Dr Roerich worked on his masterpieces—profiles, landscapes, Indian themes—metaphysical and esoteric—mountains and flowers. A thick layer of dust swathes the black-and-white photographs of Pt Jawaharlal Nehru and Sardar Patel lying on the study table, the portrait (about 2 ft x 4 ft) of an Indian woman, the pile of expensive carpets stacked in a corner, a divan, dressing table with a mirror and a studio screen. Nehru's pictures were possibly requisitioned for the late prime minister's portrait that now adorns the walls of Rashtrapati Bhavan. An additional floor, which would have been an extension to the studio, stands incomplete and shelters monkeys, birds and squirrels.

About 50 ft east of the house is a zinc structure (about 10 ft x 10 ft) that contains the graves of Dr Roerich and Devika Rani. They bear no epitaphs; just a row of flower-pots and a couple of miniature flags (placed by visitors) with Russian script mark Dr Roerich's grave. He was buried here in 1993, though he'd willed that he be interred in St Petersburg, the place of his birth in 1904. His body couldn't be flown as Devika Rani was ill and couldn't travel. She passed away a year later and her ashes after cremation were interred next to her husband's grave.

Beyond, the couple's linolae or Indian lavender factory (they used to extract oil from linolae trees and market it to perfumery units in Mumbai and other cities), lies collapsed. Some of the machinery has decayed. A lake next to the factory has become a watering hole for wild elephants while cobras and pythons slither around trees elsewhere on the estate.

Expectedly, Russians are in a tizzy over the state of affairs. They're demanding that Dr Roerich's remains be shifted out and interred in St Petersburg. Russian envoy Alexander M. Kadakin, on his recent visit to the estate, was moved to write a letter to Karnataka chief minister S.M. Krishna where he wrote: "At present, the state of affairs in Tataguni is...heart-breaking. The Roerichs' heritage is equally dear to the hearts of Russians and Indians. We can't waste any more time. It can perish irretrievably."

Russians apart, some Australians and Americans too have sent similar letters to the state government and the couple's friends, particularly Karnataka Chitrakala Parishat secretary Prof M.S. Nanjunda Rao. "They want a semblance of respect for the couple," says Rao. "They'd planned a school of art and a museum at the estate, but they fell ill and couldn't work on these projects.It's a pity they were cheated by their staff. The government must save the estate from land sharks."

In sharp contrast to the treatment Svyatoslav's legacy has been meted out, the paintings and artifacts of his late father Nikolai Roerich have been preserved at an estate that has been turned into a museum in Kullu Valley, Himachal Pradesh, by the International Roerich Memorial Trust. This trust, headed by the HP chief minister, has dedicated the museum to the senior Roerich. More than 50,000 tourists come here every year. But the estate near Bangalore has been sealed and declared out of bounds by the police.

And successive governments have ignored the Russians' requests. Krishna, a friend of the couple, would rather that the law take its course. "I know their souls are troubled now. I am as unhappy as the Russian government, but the rule of law has to take its course, particularly when some unscrupulous elements have got into the act. We have to overcome these. Then we'll redeem the estate to its original shape...." says Krishna. He would not allow the remains to be flown to Russia, he said.

Krishna is alluding to the protracted legal battles in various courts in Bangalore over the couple's legacy. At least four wills have surfaced after their death as the couple did not appoint an heir or write a will. In most of these documents, the couple's former secretary, Mary Joyce Poonacha, has been named benefactor, causing suspicion and the arrest in 1994 of the lady, her husband M.A. Poonacha and his friend B.M. Nandakumar. Interestingly, the wills were investigated after Mary's brother-in-law, R. Devadas, filed a complaint claiming that he held the power of attorney for Devika Rani.

Mary was charged with misappropriating funds up to Rs 2.5 crore. Among the artifacts seized from her were several gold necklaces, gold coins of French, Russian and Bulgarian markings, antique idols, gold bangles, antique gold spoons, pearl necklaces, ear studs of precious stones, ankle chains, animal hides, paintings and two revolvers. She is even accused of sending out telegrams (in Dr Roerich's name) to the then Russian president Boris Yeltsin, the then prime minister P.V. Narasimha Rao and Sonia Gandhi, opposing the the state government's move to acquire the estate. Dr Roerich was on his deathbed at that time, and couldn't have sent these telegrams. Mary has challenged the cases against her in the high court.

Adding another twist to the estate tangle is the claim of Bangalore-based K.T. Plantations Ltd. Both Mary and the company had sought a stay on the state government's order to acquire the estate, paintings, jewellery and antique idols, the idea being to hand them over to a trust which was to set up a museum for Dr Roerich's paintings and a school of art on the estate. K.T. Plantations Ltd stated it had bought 141.25 acres and paid advance for another chunk of 120 acres, the transaction worth Rs 89 lakh. However, a bench comprising Justices G.C. Bharuka and A.V. Srinivasa Reddy questioned the company's claim on how the couple died without sufficient cash to clear bills at itdc's Hotel Ashoka in Bangalore (they spent the last four years in its suite) if the company claimed it had deposited Rs 89 lakh into their bank account in 1992 and 1993?

As the state government awaits a verdict, officials blame the late couple for resisting moves to acquire the estate. They were tipped off about moves by land sharks to pick up large chunks of the estate when the couple was old and infirm.One such move in 1992 had prompted Devika Rani to issue a statement: "I am a Bengali tigress. I'll fight till the end." Except that the fight hasn't ended. Makes for a sad epitaph for a family that traced its links to the Russian czars.