A maverick businessman is setting up a fossil museum in Shirdi, a stone's throw away from Sai Baba's shrine. That is, if the local powers-that-be let him. 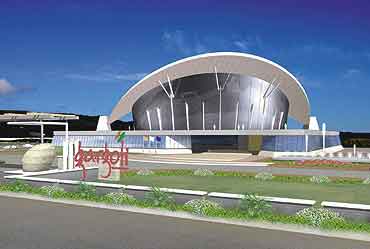 Shirdi isn’t new to Pandey. The "miraculous internal change" he experienced after his first visit to the town in 1982 has made Sai Baba his life’s pivot. He has also been a trustee of the Shri Sai Baba Sansthan Trust (SSBST) for the past year. While Pandey’s choice of Shirdi may seem like a believer’s impulse at first blush, he hastens to clarify that it is also backed by a businessman’s prudence. A naval officer, he turned his penchant for geological artefacts into Superb Minerals India, a Rs 7 crore enterprise at the forefront of India’s mineral and zeolite export to America, Europe and Australia. A far-reaching decision like this could only stem from a systematic study. That was when Shirdi pipped Mumbai, Delhi, Jaipur and Agra. "They sure have tourists and money," says Pandey, "but my project would have got lost there. As it is, museum is an abused concept in India." Adds an upbeat Jayantrao Sasane, mla and ssbst chairman, "This museum will give tourism in Shirdi a novel dimension."

Sadly, dissent is more expedient for some. Like a few SSBST old-timers, who are so piqued by Pandey’s high visibility that they accuse him of high-handedness and "abject hobnobbing with celebrities". Some have even alleged that Pandey has threatened his detractors at gunpoint.Others are openly carping about Pandey’s "Uttar Bharatiya" antecedents. As some others tilt at windmills, it becomes clear the project hasn’t been fully comprehended. Some fears verge on the bizarre. "We’ve heard there will be dance bars at his hotel; that’s unacceptable," says Shiv Sena’s Kamalakar Kote. Pramod Gundkar of the Youth Congress says the commercial character of the project will eclipse Shirdi’s spirit. "Pandey must assure us in writing that there will be no immoral activities at the centre," he says.

Pandey’s initiative is all about rocks. But despite their ethereal beauty, his rocks, often more precious than diamonds, don’t elicit exaggerated affections like those in whom humans see gods. "Our mineral wealth is huge enough to bail us out of debts and poverty," says Pandey. "But only visible minerals have been explored yet, although there’s an untapped market for micro-minerals." His logic behind Shirdi is simple. Barring the Sai Baba temple and the Shani temple at nearby Shani Shingnapur, there are no other attractions there to fill in the long wait before Baba’s darshan. And even if only half of those visiting Shirdi were to visit the museum and be charged a modest Rs 10 per visitor, an annual turnover of Rs 30 crore may not be farfetched. Pandey knows best: With a per-visitor charge of Rs 100—higher because of uneven visitor turnout and high operating costs—his Sinnar museum yields Rs 10,000 daily. "It’s easier to attract visitors in Shirdi, including celebrities, politicians and bureaucrats," says Pandey. "Although moneymaking isn’t my driving objective, where’s the harm if I want the project to break even," he asks.

Pandey’s affair with rocks began in 1977 when, as a 17-year-old interviewee on his way to ins Shivaji, he accompanied his brother to the Uran quarry near Mumbai and chanced upon milky white apophyllites and orange stilbites. For the next many years, an enamoured Pandey could be found gleaning minerals at every quarrying, road building and blasting site around Mumbai and farther in the zeolite-rich Deccan plateau. This "teenage love" later spurred him into a century-old Indian vocation that was largely the preserve of the rich.

There’s been no looking back since. "I once bought an aquamarine for Rs 27 lakh," he recalls. "Another gemstone from Karur, Tamil Nadu, cost me Rs 55 lakh and was sold for 2,25,000 Euros." "His specimens are of the highest quality," says Jeff Scholffman of North Carolina-based Crystal Perfection. John Biczok of Canadian Rockhound, an online earth sciences publication, states, "The museum at Sinnar has to be one of the world’s finest private mineral museums. While India is a prolific producer of wonderful zeolite minerals that are sought after by collectors worldwide, there are only a handful of true mineral collectors in this nation." Pandey is certainly leaving no stone unturned that will add to Shirdi’s fame.