Leading environmentalist and the first person to have walked to both poles of the Earth, Robert Swan, OBE, visiting India, speaks on ecological issues. 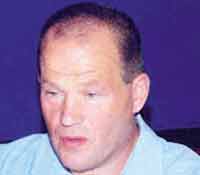 What brings the world's greatest polar explorer to India?
I'm here looking for two young Indians to join us on a 40-member international mission called Inspire Antarctica, in February 2005.

Out of 40, two members from India?
Yes, with a population of one billion people, India needs youngsters to address these issues.

Have you found two suitable Indians?
We're still in the process of identifying them...

What will the mission involve?
Environmental issues like melting ice caps can only be resolved with leadership and teamwork skills. India's representatives, as part of this team, could be powerful world citizens tomorrow.

No contradictions here? Last year, pesticides were discovered in their drinks.
No. Cola companies have become a target, they're also inspiring environmental changes at global level.

What do you consider as today's greatest ecological threats?
Climate change, water conservation and...