Developing nations score at the G-20 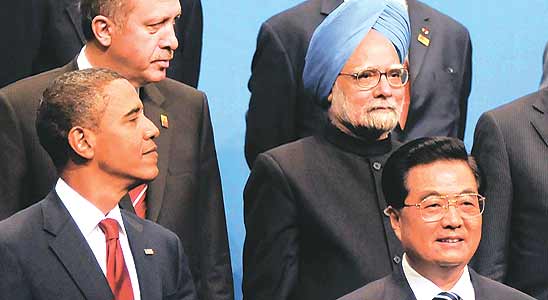 It was a draw of lots that determined the seating arrangement at the dinner hosted by US President Barack Obama at Pittsburgh’s Phipps Conservatory and Botanical Gardens on September 24. For the G-20 leaders  though, its outcome was highly symbolic—on Prime Minister Manmohan Singh’s right was Obama and on his left  Chinese President Hu Jintao, an inadvertent signal of the emergence of a new world order. Indeed, Manmohan has successfully managed to impart a certain heft to India’s role in the G-20, now recognised as the main forum to discuss key economic problems besetting the world.

For some time now, the West and others have been passionately debating the relevance of the G-8, the elite club of the most developed nations, arguing that no panacea for global economic ills can be found without the participation of key emerging economies. Hence, the inclusion of the five outreach countries—India, China, Brazil, Mexico and South Africa—in recent G-8 summits. As for the Pittsburgh summit, it was the third of its kind ever since the financial crisis rocked the US last year and generated shock waves across the globe.

The developing world succeeded in getting a higher vote share at the imf, wealthy nations had long resisted this.

Even on his way to Pittsburgh, Manmohan had stressed the necessity of India engaging in the management of the world economy. India had a lot at stake, and a lot to contribute, he said. “With the rise of Asia, with the growth of India, China and Brazil, the economic decision-making has to take into account the view of these countries if it is to have optimum impact,” Manmohan said.

Other nations also reflected this view. For instance, Obama made it clear that “power is no longer a zero sum game”.  He further said, “No nation can or should try to dominate another nation. No world order that elevates one nation or a group of people over another will succeed.” As the meet wound down, G-20 was agreed upon as the main forum to discuss major economic issues.

But this wasn’t the only gain for India. For instance, it was also agreed that though many economies have begun to show signs of improvement, it’s premature to withdraw the emergency stimulus measures right now—a point Manmohan stressed upon. “We will act to ensure that when growth returns, jobs do too. We will avoid any premature withdrawal of stimulus,” the G-20 communique at the end of the summit said.

It was also decided to increase the vote share of the developing countries at the imf, a demand the developed world had fiercely resisted for long, and introduce a mechanism where others could scrutinise the fiscal policies of wealthy nations. Although the vote share in the imf increased only by 5 per cent and not 7, as had been demanded by developing countries, “the compromise” was accepted as “a good first step in the right direction”.

The developing world also stressed that the World Bank should allocate greater resources as loans to poorer nations, and steps should be taken to ensure foreign investments in the development of their infrastructure. These steps, it was said, would enable the poorer countries to reap the fruits of development and address social disaffection. The G-20 is expected to take a decision on these recommendations in the future.

Summing up, a senior Indian diplomat told Outlook, “The outcome of the summit is very encouraging for India and the developing world. Though some may argue that enough has not been done, we see it as a very good beginning that could lead to major gains for the developing and poor nations.”