Pak signals peace right after it spurns India. Why? Updates 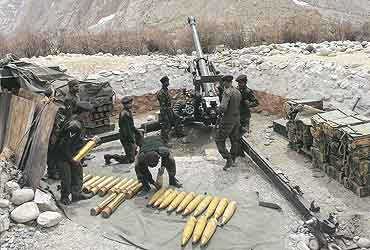 outlookindia.com
-0001-11-30T00:00:00+0553
On November 26, the day the ceasefire agreement between India and Pakistan came into effect, Prime Minister A.B. Vajpayee was in Raipur, addressing a poll rally. There, he made an intriguingly ambiguous remark, the kind that has become his trademark. "After long persuasion, Pakistan has agreed to the ceasefire and I am sure it'll last long," Vajpayee declared. What kind of persuasion was he referring to? American pressure perhaps—that had been brought to bear on Islamabad? What lent credibility to this was the fact that a couple of days earlier, Pakistani PM Mir Zafarullah Khan Jamali, celebrating one year in office, made a speech overturning many of the benchmarks set by foreign secretary Riaz Khokar in the last week of October over India's peace proposals.

Then, as Pakistan responded to the 12-point peace proposals India had made on October 22, Khokar had declared that Pakistan was prepared to discuss a bus route between Muzaffarabad and Srinagar only when a composite dialogue was under way and only if the travellers carried "UN documents". Similarly, Khokar had said the Khokrapar-Munabao link, which India had proposed, could be discussed only during a composite dialogue. Ditto for a Karachi-Mumbai ferry service.

India had accused Pakistan of attaching "impractical, extraneous and delaying conditions". Now, Jamali was accepting the suggestions Khokar had all but rejected. Suddenly, Jamali wasn't only saying that Islamabad was prepared to discuss these issues forthwith but also that Pakistan was "ready to host the dialogue". In October, Khokar had declared that New Delhi's suggestion of holding visa camps would have to wait till the missions were fully staffed. Now, Jamali was saying the two high commissions could examine the possibilities without further ado. Earlier, Islamabad was reluctant to consider an additional bus service between Delhi and Lahore. Now it was saying the opposite.

Jamali took the charm offensive even further by proposing that the interior and home ministries of Pakistan and India solve problems of the prisoners in each other's jails. More surprising was Jamali's declaration that Pakistani armed forces deployed on the LoC had been ordered to observe ceasefire with effect from Id. The next day India declared it would respond "positively" and sought a clarification if the ceasefire would extend to the Actual Ground Position Line in Siachen, where since '84 India and Pakistan have been locked in a remorseless and punishing duel in the icy wastes of the glacier. In less than three hours, Islamabad said the glacier also fell under the ceasefire's purview.

The irony is that the contours of restoring peace and tranquility in Siachen had already been fleshed out. By 1992, a broad understanding had even been reached on disengagement and redeployment, monitoring and maintenance of peace as well as an implementation schedule. Although defence secretary-level talks took place in 1989, fighting in this remote battleground has never halted since 1984. This is the first respite soldiers from both countries are getting. But for how long?

Answers are also not forthcoming on what brought about the change of heart. Says a senior diplomat: "Clearly, Americans and others had been working to keep the proposals going." Diplomatic sources also say these developments go a long way in creating the right kind of atmosphere for the SAARC summit scheduled for the first week of January in Islamabad.

With the new developments, senior bureaucrats now say that theoretically a template exists to build relations in a manner that can be sustained beyond the SAARC objective. That is, if there is movement in the already agreed agenda. Sources also say that to cope with the pressures of SAARC it is not necessary to increase mission size.All that needs to be done is to post officials on a temporary basis for the purpose. The process of earmarking these officials may have already begun.