Road does not catch you by the collar and take you to the edge of the seat. Nor does it make you bite your nails in fear. It just keeps a hold on you with constant, unexpected twists and turns. 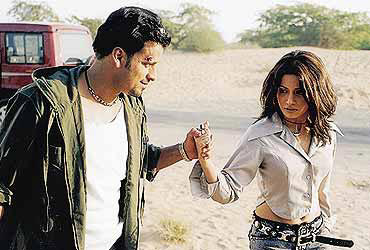 That Rajat Mukherjee wants to tread on a road less travelled is apparent in the title sequence itself with the spiffy credits rolling out like a simulated drive on an expansive virtual freeway. There are other definitive ways in which the film tries to swerve away from mainstream traffic—it has a script that doesn't meander too much and a narrative which largely stays on course. Most of all, it's different in the way it tries to take the audience along on its protagonists' journey, at the end of which everyone's left wondering whether it's more dangerous to offer a lift to a stranger or to take one.

Road is a racy road movie, a tingling thriller, an unusual love story and also a disturbing comedy. Most of all, it's a character exposition. The entire narrative moves with one individual alone—the bizarre Babu, played with an obvious relish and...