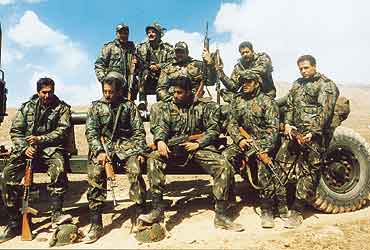 outlookindia.com
-0001-11-30T00:00:00+0553
The difference is obvious in their shade cards. No three films could come with such distinct and disparate colour schemes. In LoC Kargil you are likely to see just olive greens against brown trenches and snowy white mountains, Khakee comes smeared with the commonplace dull khaki of police uniforms while Kal Ho Naa Ho glistens with all the possible hues of a rainbow, bright as well as pastels. And it's the united colours of this triumvirate that's painting new, technicolour dreams for Bollywood.

The year might be nearing The End but things are stirring in the Indian film capital. After the 40-day World Cup-induced hush in February-March, when the trade came to a virtual standstill, much of the action at the box office unfolded between April and August. Then it was quiet again. Funnily, in an industry reared on the diet of big summer and Diwali releases, it's the winter which is turning on the heat. The last two months of 2003 have movies worth some Rs 200 crore scrambling for release with almost half the amount riding on the three biggies alone—Nikhil Advani's Kal Ho... written and produced by Karan Johar, Raj Kumar Santoshi's Khakee and J.P. Dutta's LoC.

This will go down in cinematic history as the year that held out hope and cheer after the crash of 2002. Bollywood started on its road to redemption with a fair mix of successes like Aziz Mirza's Chalte Chalte, Raj Kanwar's Andaaz, Ram Gopal Varma's Bhoot, Ken Ghosh's Ishq Vishq, Amit Saxena's Jism, Harry Baweja's Qayamat, Prakash Jha's Gangaajal and Ravi Chopra's Baghban. And timid hope turned to seamless joy with the massive all-India hit Koi Mil Gaya, Rakesh Roshan's ET-meets-Forrest Gump-meets-Big. Though the industry has seen a fair amount of tight-budgeted, sensibly-priced movies this year, it's still the big money, the megastars and the directorial top brass that make the stars shine. "They hold the promise of an earth-shattering opening and of churning out a huge hit," says Komal Nahta of Film Information.

"It's my tribute to the Kargil war heroes, about what they went through, the conditions in which they fought and the way they died," says J.P. Dutta for whom LoC will be the third in the conflict trilogy, after Border and Refugee. But the implicit attempt has been to redefine the genre of Indian war movies, to move beyond patriotism and delve into the psyche of soldiers in a conflict situation. What influenced Dutta was a sentence a US Vietnam veteran uttered in a war docu: "It was not as though we were fighting a war. We were just helping keep each other alive." According to Dutta, LoC doesn't have any "bravado of mera desh or mera mulk". "The motivating factor for the soldiers was the reputation of their battalion. More than fighting for the country, their main aim was not to waste a colleague's death. They fought back to compensate his death with victory and they did this without crossing the Line of Control. That's the spirit of LoC," explains Dutta.

The project took off with the blessings of the Dalai Lama. And now has its stars rooting for it. "As a kid I used to accompany my father on the shows he held for the soldiers. When JP approached me, I was happy to do the role," says Sanjay Dutt.Shetty claims to have done the film for emotional reasons: "I didn't even read the script. I had to be part of the experience, it was like being part of history."

If there's anything Khakee does share with LoC, it's the enviable line-up of heroes. The Rs 35-crore action drama about cops revolves around the central figure of Amitabh Bachchan, with Ajay Devgan, Akshay Kumar and Tusshar Kapoor forming the rest of the crack team. Aishwarya Rai provides the visual relief while Lara Dutta adds the zing with an item number. While Akshay hasn't quite stopped raving about his light-hearted act in the film, Devgan, with his new ash-brown messy hair, has been promising that his role would be a "surprise for the audience". The Santoshi project has been in the news for a while, at times for the wrong reasons—for Akshaye Khanna walking out to make way for Tusshar and for Aishwarya's much-written-about accident. It also provided fodder to the gossip mills for sharing its cop theme with another forthcoming venture from Madhur Bhandarkar, Aan. However, all that Khakee makers have to say is that after a series of films where cops have been shown in a negative light, this will be the first Indian film to portray them in a "totally positive manner".

Khakee hits the marquee the same day (November 28) as the Rs 25-crore love triangle, Kal Ho.... Apart from its box office prospects, it'll mark a significant new direction for superhit machine Karan Johar. Very early on in his career, he steps back from direction to let his assistant Nikhil Advani take charge. "I thought it was essential to learn cost control, budgeting and the distribution mechanism. So I took creative time off but kept the production house on the roll," says Johar. It seems to have helped. "I've been a spoilt brat as a director, making unfair demands on my producer father. Now I'll think twice before asking for something," says he.

There is Johar's perennial favourite Shahrukh and goodwill mascots Kajol and Rani Mukherjee in walk-in roles, but with Kal Ho..., he gets to work with a new set of people—cinematographer Anil Mehta, Preity Zinta and Saif, lyricist Javed and music directors Shankar Ehsaan Loy. Though Johar himself has written the story, the treatment, the technique and the grammar are all Advani's, thus promising a film with the emotions of a K3G and Kuch Kuch..., yet not quite like them. "I've broken a lot of rules. The dramatic, comic moments, how the scenes unfold is different from what Karan prefers. It's more subtle, lot less in-your-face," claims Advani. He calls the film a "celebration of life". "It asks you to stop and smell the flowers, asks you to enjoy that one moment in time," he says. A reason why it's based in pulsating New York as opposed to Johar favourite London. "The story demanded it. It's an overpowering city and the film just moves from Manhattan to Queens," says Advani. Not from London to Ludhiana. Look out for Jaya who promises to surprise you in an unconventional, sweet role as Preity's mom and the "indispensable" Saif. "You wouldn't imagine anyone else playing that role," says Advani.

Meanwhile, Bollywood is seeking another big universal hit after Koi Mil Gaya. Will all three make it? Will they have the industry go delirious with joy? Which film will be the final cherry on the cake? It's all coming soon to a theatre near you.