A beautiful elegy to a decaying world whose sadness lingers on. 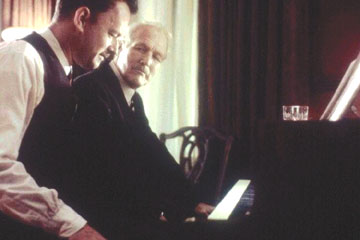 It's pouring incessantly. Mob's big daddy, John Rooney (Newman), and his trenchcoat-and-hat-clad gangmen are ambushed in the street by the renegade foster son and once-trusted lieutenant Mike Sullivan (Hanks). Rooney's shoulders slump poignantly in the face of his imminent death at the hands of a lost child. Sullivan's face cracks up with the realisation of the enormity of killing someone he loves. All along, no sound of bullets pierce the ears, only a gun flashes silently at a distance and sombre music plays on in the background. The only words exchanged are Rooney telling Sullivan: "I'm glad it's you."

It's one of the many stylised set pieces that are sprinkled all over Road To Perdition. Mendes presents gangster wars in a picturesque, lyrical mode with Conrad Hall's camera literally turning violent encounters into haunting musical compositions and exquisitely choreographed dance pieces. Each frame is like a glorious painting or a studio photograph wherein each element is painstakingly placed to create an impression of quiet and harmony underneath which lies an immeasurable turmoil.

A Warm Chair On The Distaff Side