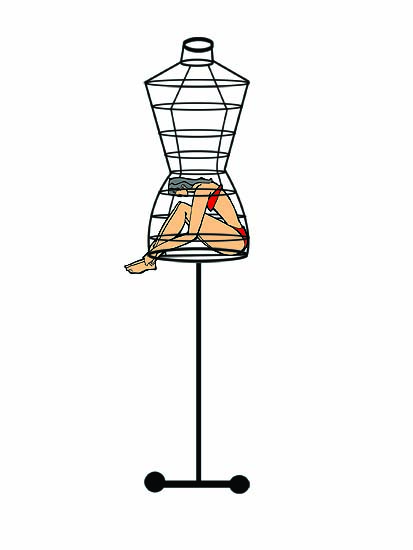 As a BJP member of the Mumbai Municipal Corporation, I did hesitate before starting a secret diary. I had heard that only filmstars and other VVIPs do it. But my colleagues in the BJP and Shiv Sena pointed out that my fame had spread far and wide and this is the result. And it’s all due to my ‘Marathi manoos’ sensibilities, which tell me unerringly that scantily clad mannequins create bad feelings among bad men, which in turn could lead to some bad rapes and some bad molestations. Of course, I am still to approach a scantily-clad girl (Mumbai is full of them) and caution her on the consequences of her actions. And, yes, I do believe in democratic values. But I also represent the mindset of a majority of Mumbai women who also think like me. Though I did not directly approach these scantily-clad girls, I did enter some of the fashion shops and lecture the mannequins on how they should dress more decently, particularly those fronting the lingerie department. But the mannequins were strangely silent.

That said, I am happy my movement is catching on. The BMC unanimously passed my resolution on decently dressing up the mannequins before putting them up on display. But I am sorry that some of the male members showed a vested interest in the matter. They demanded the removal of the mannequins and suggested they would advise female customers  behind closed doors on what kind of lingerie they should wear. They got so excited I nipped this proposal in the bud.

The mayor of Mumbai is a busy man but he too has taken a keen interest in the matter, even taking it up with the CM who, I hope, understands the sentiments of the people. Very soon, we can expect some positive moves, like the appointment of a special MLLC (Mannequin Lingerie Licensing Committee) or even a judicial inquiry into the matter. Many retired high court and Supreme Court judges, I understand, have volunteered for the job (even without payment). That is Mannequin Lingerie Power for you! My party colleague Shaina N.C. who calls herself a fashion designer tried to dissuade me in this effort because she has, in the past, organised and judged lingerie contests. But nothing doing, I told her off.

Indeed, the mannequin issue has really caught on. In the past, I had broken up gambling dens but no one bothered. Now, after this, I have been featured in 241 media interviews, TV discussions and what not. The only problem was with the BBCwallahs. Since I was not fluent in English, they suggested I demonstrate what I thought was wrong with the mannequin culture. Oh no, I could not indulge in such explicit gestures and finally the interview was done in Hindi.

Mind you, this is an election year and moral policing has a captive vote-bank. I intend approaching all parties, persuade Anna Hazare to fast, ask that Kejriwal bhai to take the issue to the ‘aam aadmi’ and also humbly request Rakhi Sawant and Mallika Sherawat to lead us.