Rise And Fall Of The Second Indraprastha

It was the party's darkest hour. A sulking Vajpayee and a shell-shocked Advani retreat into their cubbyholes—leaving the footsoldiers clutching at straws. 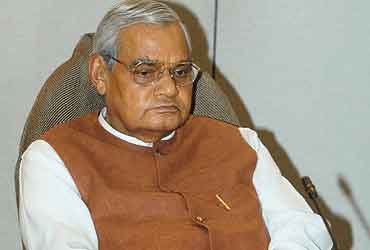 outlookindia.com
-0001-11-30T00:00:00+0553
There is a curious coincidence involving the residence at 8, Krishna Menon Marg into which Atal Behari Vajpayee will shift in three weeks. It used to be the home of Manmohan Singh when he was finance minister in the Narasimha Rao government. The seven-bedroomed house in Lutyens' Delhi may have been a stepping stone in Dr Singh's long and distinguished career. But for Vajpayee, it will be a retiring home.

Outlook has learnt that the former PM won't accept the post of leader of the Opposition. Though no formal announcement will be made till the BJP's parliamentary party meets after the session of Parliament is called, Vajpayee is not inclined to accept the post.

All sightings of Vajpayee after the results have shown the former PM looking pensive and demoralised. Vajpayee is reportedly so upset with the way some of his colleagues have conducted themselves that he has reportedly made up his mind to hold no formal position in the BJP. Sadly for Vajpayee, he was denied a graceful retreat or exit as some of his colleagues indulged in tantrums. Uma Bharati, for instance, did not even check with Vajpayee before staging her resignation drama.

Vajpayee will purportedly settle for the honorary post of chairman of the NDA. His principal secretary Brajesh Mishra, a retired ifs officer, is reportedly contemplating writing his memoirs about his PMO days.

Advani will, therefore, be the leader of the Opposition, a cabinet-rank designation. He will thereby be able to retain his bungalow and will be served by a joint secretary-level ias officer. Protocol demands that foreign visitors will now call on Advani and not Vajpayee when they pay their mandatory visit to the Opposition camp. As a former PM, Vajpayee will only be entitled to junior level officers. In a sense, Vajpayee's downgrading parallels what is happening to Sonia Gandhi who has also lost her cabinet rank (she was leader of the Opposition). Yet, both Vajpayee and Sonia continue to be under spg protection while Advani gets only Delhi police security.

Perhaps, it's just as well that Vajpayee has decided against an active role in party affairs. For, in Opposition the BJP will have to adopt a more combative style, which does not come naturally to Vajpayee.

Meanwhile, some believe that Vajpayee is guilty of doing nothing to rein in his party. He has reportedly refused to say a word in most NDA and BJP meetings. His fellow-traveller and sometimes-on-sometimes-off rival Advani too has been unusually silent. While Vajpayee expected Advani to handle the party, his deputy was apparently too heartbroken to really speak out against individual grandstanding.

Eyebrows have also been raised at the usually graceful Vajpayee failing to congratulate Sonia when the results first came out. Says a BJP MP: "As the outgoing PM, he should have spoken out against the decision to boycott the swearing-in if Sonia had become PM." Since the results came out, Vajpayee has more or less refused to engage himself in party affairs and has allotted most of his time to outgoing ministers, public sector chairmen, spg personnel and PMO staff who wished to make farewell calls.

Meanwhile, there are some old-time Vajpayee associates who believe that without him at the helm the party has no future. Says a BJP veteran: "There's a danger that at this time when the sane voices are silent, the loony fringe will try to take over." But if this does happen, then a party already pushed to the margins will fade into irrelevance. Vajpayee may well find that place in history—not as the peacemaker between India and Pakistan but as the only leader who made it possible for the BJP to rule from Delhi