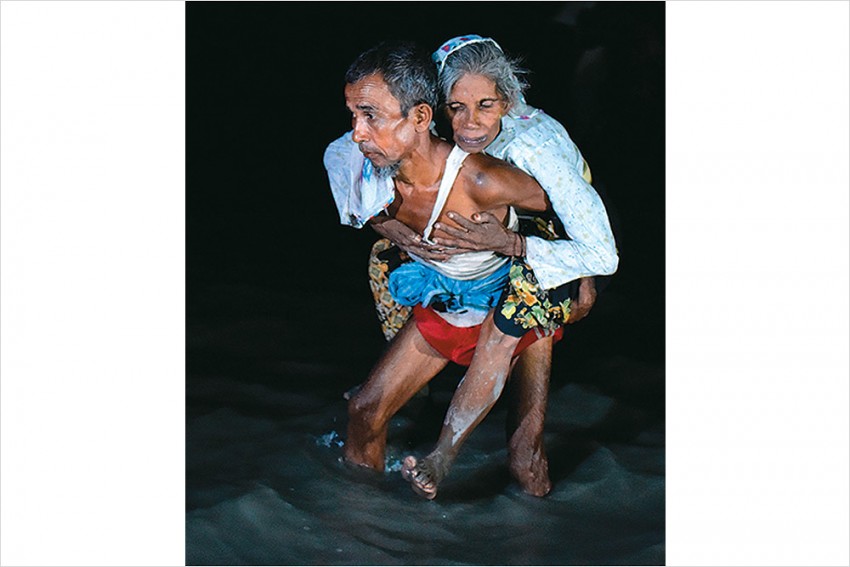 Dark Hour
An aged Rohingya pair gets down from a boat on the Naf bank
Photograph by Alamy
Bharat Bhushan February 02, 2018 00:00 IST Ripples Turn Into Waves 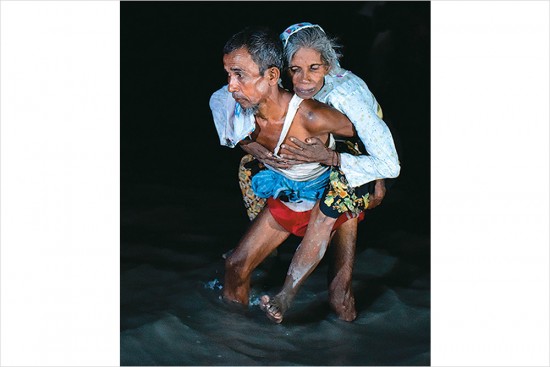 The Bangladesh government has put the repatriation of nearly 7.5 lakh Rohingya refugees from Myanmar on hold by a month bec­ause of protests in the refugee camps and international pressure against a hasty deal. The rep­atriation process follows from a bilateral “arrangement” signed by Bangladesh and Myanmar in November last year to send back the Rohingyas crossing into Bangladesh after October 2016.

Two refugee leaders or majhis, who favoured repatriation, have been murdered in the refugee camps in Cox’s Bazar. Those whose names they had put on a repatriation list are being blamed. The fact remains, however, that Ban­g­ladesh has neither the financial res­ources nor adequate public support to host the refugees for long.

Myanmar on its part has claimed that it was ready to receive 1,500 Rohingyas per week after verification of their resident status. Being ready may not mean much more than corralling the returning Rohingyas into ‘transit camps’. The government has made no promises to return or compensate property lost or prosecute those who committed violence. The refugees are wary of living in ‘grouped villages’ designed for monitoring and punitively controlling the Rohingya population.

Bill Richardson, former US ambassador to the United Nations, resigned from an international panel the Myan­mar government formed to help organise the return of refugees from Bangladesh. Saying he had no intention of becoming a member of a “cheerleading squad for the (Myanmar) government”, he has accused Aug San Suu Kyi of lacking “moral leadership”.

Since August 25, 2017, nearly 6,88,000 Rohingya refugees fled Myanmar’s Rak­hine province for adjoining Bangladesh. The Myanmar Army burned down Rohi­ngya villages, shot dead young adults and raped, tortured and abducted Rohingya women while ostensibly sear­ching for extremists who had attacked 30 police posts and one military outpost on the August 24/25 night in north-west Rakhine. The UN has described these army operations as a “textbook example of ethnic cleansing”.

The refugees are housed in makeshift bamboo and tarpaulin shelters in spo­ntaneously formed and government-run camps in the Teknaf and Ukhiya sub-districts of Cox’s Bazar. Some 3,000 acres of forest land has been earmarked for a massive refugee camp in Balukhali and Kutupalong in Ukhiya. It is run by the army along with the local district administration. Except for 450-odd Hindu refugees, the Muslim Rohingya refugees are apprehensive of returning without guarantees of safety, and assurances of citizenship and justice.

At the Kutupalong refugee camp, Ghulam Nabi (all names of refugees have been changed), a majhi, sums up the dilemma of being stateless, “We are ‘Bengalis’ in Myanmar and Rohingyas here. We are not accepted in either country. But how do we go back if there is no peace in Myanmar?” Sayeda Khatun, a woman, interrupts the majhi with all the anger she could summon, “Both my husband and son were killed. I don’t want to go back at all.” Other women joined her in refusing to go back.

At the adjoining Balukhali camp, Ali Mamun from TulaToli village, the scene of a ghastly massacre by the Myanmar Army on August 30, 2017, asks, “Where should we go? Three out of my four sisters were killed along with one of my three brothers. Seven of us fled here after walking for three days. If there is no peace in Myanmar, what should we do?”

Mohammad Ameen of Urbi village admits that he will want to go back only “if there is assurance of peace and security based on Myanmar-Bangladesh understanding and if our property is returned.” He adds, “But we also want justice against the atrocities of the Myanmar army. Our children were killed and our women raped.” The question remains unanswered on where the unaccompanied and orphaned children, besides members of women or child-headed households or raped women with possible ‘war babies’, will return to.

The Bangladesh government had deci­ded that the Hindu refugees would be repatriated first. The Hindu refugees, housed in a separate camp, say that the violence against them was not from the army but from militant Rohingyas, possibly of the Haraqah a-Yaqin, better known as the Ara­kan Rohingya Salvation Army (ARSA).

Aashirbad Pal, a Hindu refugee, standing outside a ramshackle long bamboo and tarpaulin shelter housing an incredible 60 families, explains, “ARSA wants freedom. They wanted us to join them. We refused and they attacked us. We have Myanmar citizenship, while the Muslim Rohingyas don’t.”

He adds, “We are willing to go back right now but only if the Myanmar and Bangla­desh governments provide us security.” ARSA is believed to have killed 187 Hindus, burned down houses and temples and local Rohingya Muslims allegedly stole their cattle.

A senior official of the United Nations High Commission for Refugees (UNHCR) in Cox’s Bazar puzzled over Dhaka’s rush to repatriate the refugees says, “At the moment the refugees just need to settle. Some are still trying to find their missing family members within the camps. They need to form community links and get over their trauma.”

At the core of the repatriation efforts is Bangladesh’s refusal to recognise the Rohingyas as “refugees”. Termed as “Displaced Myanmar Residents”, they are at best “migrants” who do not enjoy any strong protection under the law.

As “refugees”, they would be protected by a consolidated international law. They would be allowed to seek employment in the host country, apply for asylum and protected from forced repatriation to a country where they could face discrimination (principle of non-refoulement). Bangladesh, however, is neither a signatory to the 1951 Convention Relating to the Status of Refugees nor the 1967 Refugee Protocol (incidentally, nor is India). With no refugee policy, Bangladesh deals with the Rohingyas under the Foreigners’ Act of 1946 and local administrative mechanisms, although most policy decisions up to now have favoured the refugees.

The locals, who had initially welcomed the refugees, have of late become resentful. Many complain of rising prices.

The turning of public opinion against the refugees is an added reason for the government’s determination to rep­atriate them. The local community which initially welcomed the refugees has slowly become resentful. In Ukhiya sub-district, the refugees already outnumber the locals. A Rohigya Pratirodh Committee exists in Cox’s Bazar since the 1990s.

Locals complain that the price of daily commodities is rising because of the refugees and that they were being under­cut in the labour market where daily wage rates have fallen from Bangladesh Taka 400-500 to less than half. “Local employment is not allowed but in reality we cannot prevent that. The refugees have undercut the daily-wage rates, as they are willing to work for less,” says Mohammad Wahidur Rehman, the Additional Deputy Com­missioner General of Cox’s Bazar.

The local people also feel that refugees get priority in accessing services such as healthcare, as government doctors have been deployed in the camps. Schooling too has been largely disrupted as the army is yet to fully vacate school buildings occupied when it was drafted to manage relief distribution.

Local women are apprehensive that their husbands might take younger Rohingya women as a second, third or even fourth wife. Rohingya women are desperate for Bangladesh citizenship and local men think marrying them would mean access to free food and relief material.

Damage to the local environment and ecology are also a concern. Mohammad Junaid of Shomudrobarta newspaper said, “Our forests and agricultural land has been taken over by the refugees.” Elephant populations in the adjoining forests have already moved away. Environmentalists warn of the possibility of water sources drying up as hillsides are cut and deforested. The indigenous tribes of the Chittagong Hill Tracts fear further ingress into their territory as Rohingyas from previous waves have settled illegally in their area. Although Cox’s Bazar Assistant Superintendent of Police Muhammad Afrujul Haq Tutul denies a rise in crime rate, he concedes that “one should take the apprehensions of the local population into account”.

Even UN officials agree that an inc­rease in trafficking and trade in drugs and small arms is possible because of the “movement back and forth” across the border. Drug trade—almost exclusively in Yaba (tablets containing a mixture of methamphetamine and caffeine)—has gone up and is a $2-billion industry today. 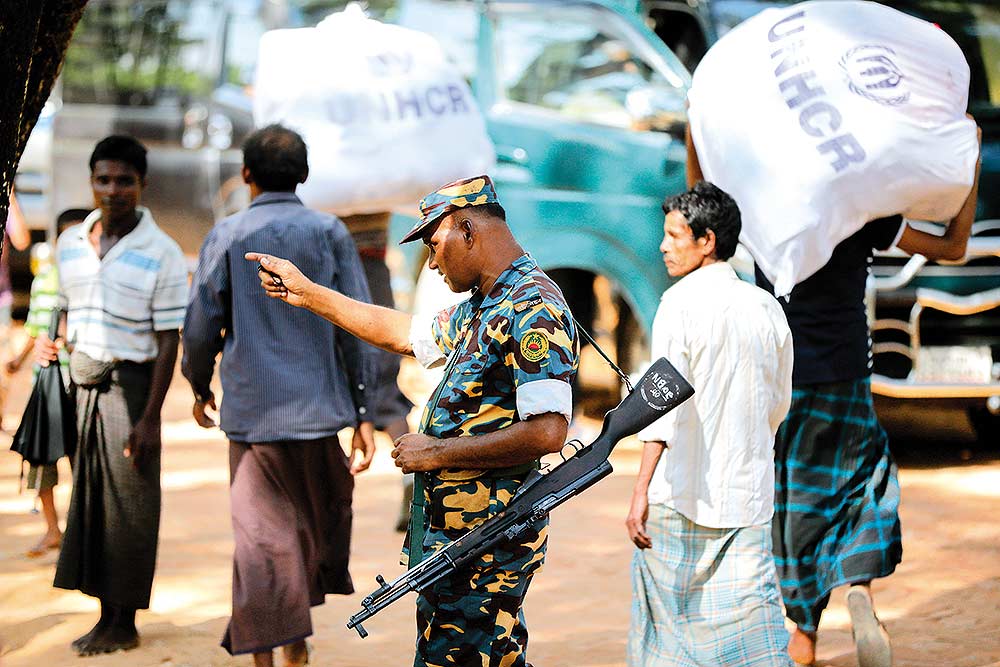 An armed soldier at Kutupalong camp in November 2017

While the local police claim to control refugee movement from the camps, aid workers say that Rohingya refugee women were engaged in ‘survival sex’ at bus stops and hotels in Cox’s Bazar. Despite linguistic similarities between spoken Rohingya and the Chittagonian dialect, the cultural dislike for the Rohingyas is palpable. They are seen as “culturally backward”. Soeb Said, a journalist with AmaderRamu.com, says, “We understand the Rohingyas are also human beings. But their lack of education makes them barbaric and aggressive.” The Imam of the central mosque at Ramu Upzila observes, “Despite being Muslims, they do not know how to offer prayers. Their behaviour is in conflict with local Muslims.” Sajalkant B. Choudhury, a Brahmin leader of Ramu, says, “They are uneducated, backward and uncivilised. Nothing good will come by their staying here.”

There are also fears of Rohingya extr­e­mists making inroads among the refug­ees. Several hitherto-unknown Islamic gro­ups are active in the camps. There were reports of night-long meetings in the camp mosques. An app­rehensive adm­inis­tration has banned the entry of outsiders to the camps after 5 p.m. “Up to now,” says Tutul, “we haven’t found any presence of ARSA loc­ally, but we have teams of police detectives keeping a close watch.”

Mohammad Nikaruzaman, the Upzila Nirbahi Officer of Ukhiya, acknowledges the shift in the public sentiment: “The resentment among the locals is growing and there could be an outburst soon.” Relief workers and the UN agencies also do not seem to be against repatriation per se, but they do not want the refugee situation to recur as in the past.

A UNHCR official says, “We should be involved in the repatriation talks as we bring the refugee voice to the table. We should also have access to Rakhine. Otherwise, how can we say in good conscience that conditions exist for the refugees to return voluntarily with safety, security and dignity?”

In 1992, the two governments had signed separate memorandums of und­erstanding with the UNHCR, leading to the repatriation of 2,30,000 Rohingya refugees. As of now, however, neither country has involved the UNHCR in the repatriation process.

(The writer was in Cox’s Bazar and Dhaka as a member of a fact-finding mission on the condition of the Rohingya refugees, organised by South Asians for Human Rights, Colombo)