Ripples On The Cooum 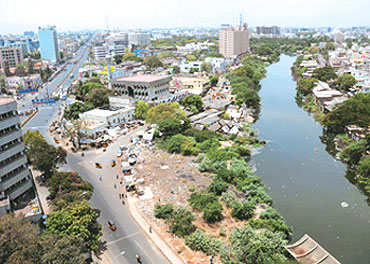 Dayanidhi Maran, who was elected to the Lok Sabha for the first time in 2004, hasn’t been able to put his stamp on his constituency. Part of the reason for this is that Chennai Central is an urban constituency and hence has a complex set of problems. But what constituents are unable to countenance is that they have had to pay a price for the feud between the Maran brothers (Dayanidhi and Kalanidhi) and their granduncle, chief minister M. Karunanidhi. For more than a year—from the time the feud broke out in May 2007 till the patch-up last December—there was almost nothing Maran could get done for the constituency, for he was persona non grata to the chief minister’s powerful family and with a constituency right in the middle of the state capital.

"At all his public meetings, he dwells on rice at Re 1 per kg, the free colour TV scheme, the free gas cylinders—all provided by the state government. He never talks about what he did," says D. Ramachandran, a constituent.

Bad roads, traffic snarls, a poor sewage system, piles of garbage everywhere, the stinking Cooum river which criss-crosses the constituency—these problems are perennial. However, what has upset slum-dwellers here, cultivated by the DMK, is the prospect of the displacement of at least 14,000 families to make way for an elevated expressway from Maduravoyal to the Port area.

Maran, who was Union IT and communications minister before falling out with Karunanidhi, claims to have brought Rs 47,000 crore in investments into the state. He has spent Rs 9.34 crore from his MPLADS funds on such improvements as additional classrooms and a library for the Industrial Training Institute in Otteri; an auditorium in a boys school; a lawn, a children’s playing area and high mast lamps in the May Day Park; a noon meal centre in another school; and cement-concrete roads in some localities. A statement from his office says Maran donated (before the elections were announced) Rs 9 crore for work on a flyover in Perambur.

While P. Ganesan, a councillor, says Maran has done some work, Dr S. Natarajan, who lives in Perambur, says, "After his election, he was busy in Delhi and abroad. He never showed up here." Others, too, say he was an absentee MP who now has to depend on Karunanidhi and leverage support from the DMK biggies representing the assembly segments in his constituency.

In November 2004, right after being elected, Maran sanctioned Rs 2 crore for a bridge over the Cooum in Aminjikarai, meant to ease traffic congestion in Annanagar, Villivakkam, Koyembedu, and Kolathur, and for the widening of the Perambur bridge. But his two pet projects did not take off because of the feud. Sources say there were specific directions from the state government against going ahead with the Aminjikarai bridge. As a result, the costs of both projects escalated. After the family reunion, the foundation stone for the Aminjikarai bridge was laid. The tenders were finalised, the work order was issued, but work hasn’t yet started on the bridge. According to a corporation official, Maran has promised to allocate from his MPLADS fund the Rs 3.67 crore the bridge is estimated to cost.

"His father (Murasoli Maran) who was the MP (for three consecutive terms till 2004) before him did nothing except build two pedestrian overbridges in upscale Haddows Road and Nungambakkam, which are not used," says a resident of the area. In 2001, Jaya TV ran a clip of a man coming off one of those bridges, only to be hailed and garlanded. When he asks why he has been felicitated, he’s told he’s the only one to have used the bridge.

Maran Junior, more comfortable in a boardroom than in a padayatra through his constituency, might have a tough fight on hand.

Asleep In The Big City