Riots: A State of Mind

A member of a mob is not only angry, he has a sense of low personal risk 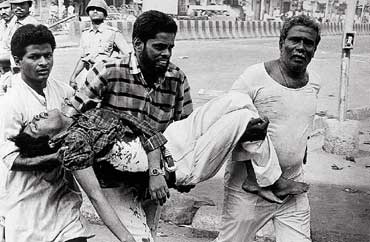 Consider a few of the many assumptions about riots prevalent in our country: economic factors, such as competition between groups for resources, are the underlying cause for ethnic riots. A riot is motivated by an envy of prosperous ethnic groups, such as a trading minority, which are then selected as targets. A riot is organised by manipulative leaders seeking political gain. Increasing prosperity following economic development will lessen the frequency of ethnic rioting.

All the available evidence demonstrates that these assumptions are hoary myths which are likely to lead efforts at controlling ethnic violence seriously astray. There may indeed be the involvement of economic rivals within the violence but such economic rivalries are not the cause of a riot. Similarly, politicians may use the riot after the fact and may try to organise it in advance but usually find that the rioting mobs will not act according to their plans. With few exceptions, the target group for violence meets one or more of the following criteria: it has a history of a long-standing enmity with the other group even if the level of enmity is sometimes vastly exaggerated, it is perceived as aggressive, constitutes a political threat or is one whose domestic strength appears to be augmented by its extra-territorial affinities, as is the case with the Tamils in Sri Lanka, Bengalis in Assam and Muslims in much of India.