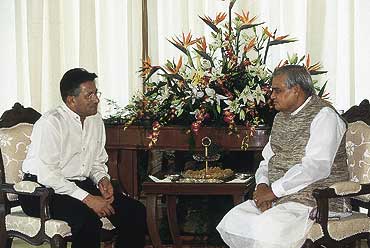 outlookindia.com
-0001-11-30T00:00:00+0553
On the eve of Prime Minister Atal Behari Vajpayee's 'third and final' effort at peacemaking, it is worth seeing whether India and Pakistan generally conclude bad agreements. South Asians often bond together abroad when foreigners criticise the endemic hostility in the region and the inability of either the people or their leaders to agree on anything. The South Asian defence is that this region is no better or worse than any other pair of neighbouring states that are hostile to each other. Well-meaning western interlocutors, faced with this merry-go-round, have attempted to expose South Asian conference participants to a gentle dose of their own experiences with 'well this is what we tried'. And it is then the bonding takes place with Indians and Pakistanis telling each other, 'Yeh log kya samajhte hain?'

If we leave our offended sensibilities aside and analyse the agreements made by western governments during the height of the Cold War, and by the Indian and Pakistan governments in the last 50 years, the comparison is telling. The first peace pact between the two countries was the Tashkent Agreement—which no one even remembers. Going through the clauses of the agreement, it becomes clear why. The two sides were to go back to their own territories, repatriate PoWs, prevent migration of people, establish trade relations and stop abusing each other, none of which were implemented. If the Tashkent Agreement is an example of how wars are concluded, it is clear one can send just about anyone to represent the country at peace talks. The agreement is a spectacular insult to the 3,000 lives lost on both sides in the war, but 1965 was perhaps a simpler era, and we were still learning to handle these things.

Six years later in the comfort of a victorious war, seven months after it ended, in the cool of Simla and holding all the cards, we concluded another Tashkent-like agreement in which just one sub-clause—4(ii) regarding the sanctity of the LoC, 54 words in all—made any contribution to sub-continental peace. The western interlocutors don't tell us all this—this is what we know. What the westerners tell us is that negotiating a peacemaking or risk reduction treaty is a long, laborious and unglamorous grind, never lasting much less than one full continuous year and always conducted by professionals. People like the foreign minister and foreign secretary are called in to sign the memorandum and take the credit, but do little of the real work. Vajpayee has an onerous burden on his shoulders, if he is to personally resolve a 50-year situation when the governmental institutions have consistently let both countries down. If this sounds unfair, consider the statistics (see box).

To be fair, the prevention of airspace violations and military CBMs have by and large held over the years precisely because these were negotiated by professionals. At this stage most knowledgeable observers will say, "What About the River Waters Accord, which has held for 50 years?" Indeed, the Indus Waters Treaty, 1960, is the finest example of how agreements in South Asia can be made to stick if the western model is followed, time is allowed for negotiations without high officials grandstanding, professionals participate and meaningless platitudes like the 'desire for neighbourly relations' are not substituted for solid, negotiated and binding clauses. The Indus Waters Treaty was negotiated with the help of the World Bank, took six years and, as can be seen, was clearly drafted by American lawyers, with no surplus prose. Everyone who negotiates on behalf of India should be made to read it.

Prime Minister Vajpayee and his Pakistani counterpart can at most give broad directives, and Lahore is a good example of the most comprehensive and brilliant set of directives, which were subsequently trashed.But what is mind-boggling is that the Lahore Agreement did direct the two governments to work out modalities for a) expanding hotlines; b) expanding military CBMS; c) conducting ballistic missile notification; d) exchanging nuclear doctrines; e) signing an INCSEA agreement; f) cooperating on IT; g) liberalising visa rules; and h) cooperating on WTO and in international fora.

All these clauses were actually lifted from similar agreements signed between 1971 and 1986 at the height of the Cold War and were signed after a combined total of 38 years of negotiating, done of course in parallel. But we are approaching the next summit in the same disorganised way in which we approached Tashkent, Simla and Lahore. If the next Indo-Pakistani summit is not to turn into another dog and pony show, we should be identifying six negotiating teams of 15 to 20 officials, each to work on trade and commerce, visa and travel, nuclear risk reduction, stabilising the LoC, the future of Kashmir and smaller teams to tackle Siachen, the Wullar barrage and the Maritime Boundary. The Americans have often asked what role they could play in furthering the talks. The biggest role they could play is procedural (not as referees) and to make the Indians and Pakistanis understand that two leaders talking for four hours is a ridiculously small step; that peace comes from big teams negotiating for months at preferably undisclosed locations, without access to the press. Most of all, we need an undertaking that the teams will continue to meet in spite of terrorist attempts to worsen the political climate.