From sprawling luxuries to crummy edu-shops, schools are becoming big business, and spoiling parents for choice 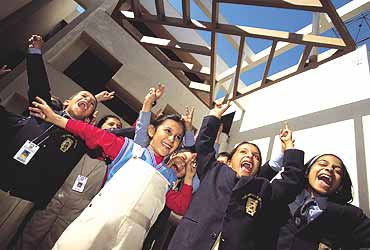 Somewhere along the drab, dusty monotony of the Delhi-Jaipur highway, a milk-and-cream Greco-Roman style building makes a stunningly sudden and absurdly anomalous appearance. The discovery that it's not a luxury motel, but a school—the Starex International School, village Binola, district Gurgaon, Haryana—is even more staggering. Who would send their child to this strangely located "day, week and full boarding" school? Well, in what is its first academic year, Starex already has 167 students, each paying up to Rs 1.9 lakh a year. This, for promised international and cbse affiliations, air-conditioned hostels and transport, tennis, golf and horse-riding facilities, gymnasium, a 20,000-seater cricket stadium, and state-of-the-art all-weather swimming pools. The school has cost its promoter and chairman Mohinder Singh Rs 50 crore, and the astute Germany-based businessman is convinced he will recover it. In fact, he has just taken over five more schools in Delhi: "They'll be feeders to my boarding school, we'll get the numbers. Indian parents have long been waiting for superior schools. It's a demand crying to be met."

Hundreds of education entrepreneurs wholeheartedly agree with Singh. The Great Indian School Bazaar is booming as never before. In a country where demand for good schools has traditionally outstripped supply, and a new generation of upwardly mobile parents want to give their children only the best, businessmen of every hue—realtors, traders, hoteliers, industrialists, nris, franchisee chains—are setting up schools. For, interestingly, though government policy and a landmark 1993 Supreme Court ruling prohibit profiteering in education, schools are permitted to make an "excess of income over expenditure": "excess" that is expected to be used towards further development of the school. In practice, school promoters often charge for consultation, management, catering, special coaching facilities and other such services, and eat up the "excess".