Placing bombs on local trains is child's play. Security checks on them is zilch. 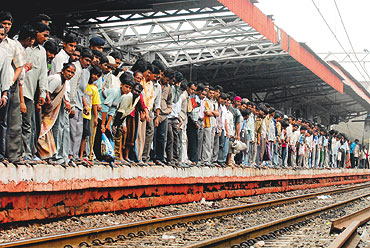 outlookindia.com
-0001-11-30T00:00:00+0553
Want to bring Mumbai to a standstill? Then halt its suburban rail services. The mastermind of the July 11 terror attacks knew that. As seven bombs went off in seven trains, it virtually derailed life in the city.

There has been much clamour ever since about the shoddy security in the suburban services of the Western Railway (WR) and Central Railway (CR), which handle close to seven million commuters a day. That's half the load of the entire Indian Railways. The truth is there hasn't been great concern or committed effort towards building and maintaining security on Mumbai's suburban rail network. Those who planted the bombs on July 11 did not have to penetrate any security cordon and systems; there were no systems to breach.

Two days after the blast, the railways have begun installing closed-circuit television at strategic locations. Other security measures will also be in place soon. According to experts there are gadgets like X-ray devices that can be installed at entry points, to detect explosives. Sniffer dogs can also be of help. "It's not that there's nothing available to increase security. It doesn't even figure in the debates we have on urban transport," says Dr Arun Mokashi, transportation expert who has studied Mumbai's transport network in great depth.

The WR, which was targeted by the bombers, runs nearly 65 kms from Churchgate towards Virar, carrying 45 per cent of the seven million commuters. Each compartment of a suburban train is designed to carry about 200 commuters; a nine-coach train has a carrying capacity of about 1,800 while a 12-coach train can ferry 2,400 commuters. However, the load at peak hours is between 4,000 and 5,000 commuters to a train.

The high density of commuters and ultra-quick turnaround time means that there would be around 20,000 people at say Churchgate station every five minutes. "How on earth can we put any security system and make it work?" asks a senior WR official. "It would take ten times the time to clear a single train out of the platform. This is not your airport or even a regular railway network, we need specially devised systems."

It may not be possible to make any system, especially one as vast and complex as this, hundred per cent secure but the railway administration is guilty of not enforcing basic-level security drills. The mere presence of uniformed policemen on platforms and trains often acts as a deterrent. While the Railway Police Force (RPF) is deployed on both the WR and CR routes, their absence is often conspicuous. In fact, commuters of the ill-fated trains on Tuesday were shocked at the unhelpful attitude and ignorance of RPF personnel.

Transport analysts also link the absence of security to the commuter load. "The large gap between demand and supply increases the load factor and heightens the security threat. But the security angle doesn't really come into any debate on urban transport though we recognise the threat," says Sudhir Badami, member of the Citizen Action Group. Tuesday was a wake-up call like no other to address commuter security.