Riddles Under The Thick Veil

A probe into Jayalalitha’s death is set to begin. Will it get caught in the labyrinth of vendetta politics? 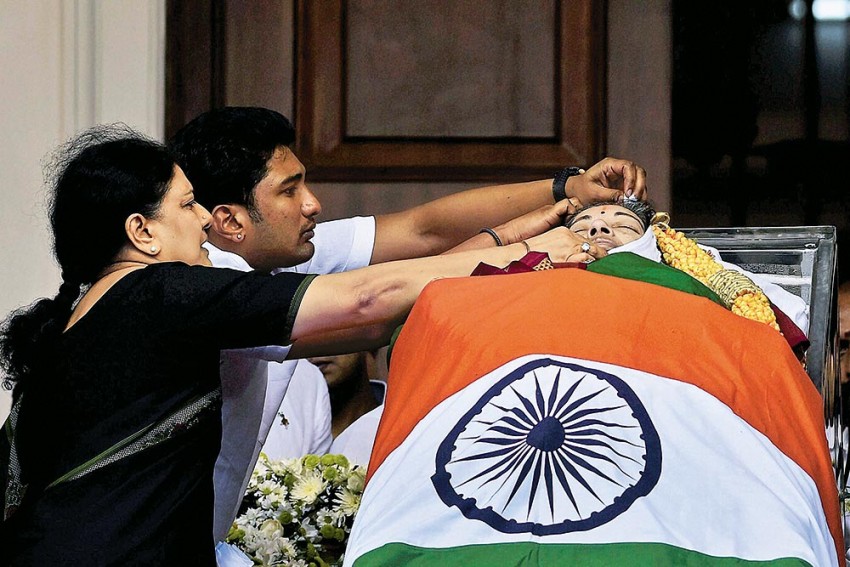 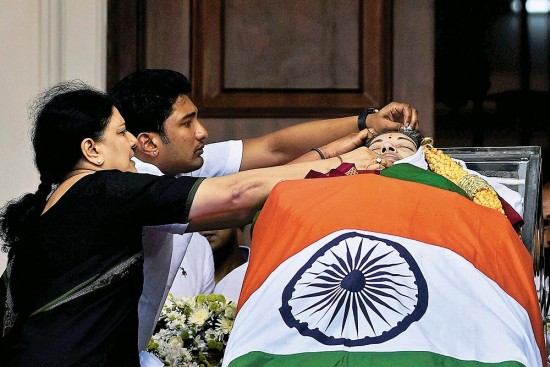 Amid the end-September heat in Tamil Nadu, a senior state minister let it out that last year the government was only parroting unauthorised sources while updating the public about the health of J. Jayalalitha as the chief minister. Dindigul Srinivasan, who holds the forest portfolio, even apologised to the people for lying that the sinking AIADMK supremo had eaten idlis during her hospitalisation. “What we told you is not true, as we never got to see Amma,” he revealed at an open Madurai meeting as part of the centenary celebrations of late CM M.G. Ramachandran. The officials were simply quoting what they were told by Jayalalitha aide V.K. Sasikala and her family, who “never gave us acc­ess”, added Srinivasan.

For a tropical state that loves its idlis with chutney-sambar, a minister pleading guilty for imaginary rice-cakes was both unpalatable and tough to digest. Indignation manifested itself in various ways including humour, gifting meme creators a field day. One said thus: “If Jayalalitha did not eat that idli, who really ate it?” The jokes were an amusing distraction, but Srinivasan’s confession rek­indled that old ghost about an entire population having been misled about the real medical condition of Jayalalitha in her last 75 days in Apollo, starting Septe­m­ber 22, 2016. The minister’s statement made it clear that the health bulletins were mere lies generated by Chennai’s AIADMK dispensation and Apollo Hos­pitals, where Amma was treated till her death on December 5.

Srinivasan’s admission sounded like a rant, for it was primarily aimed at putting the Sasikala family on the defensive so as to reignite a debate over her suspected hand in the sudden deterioration in Jayalalitha’s health. The Mannargudi clique of Sasikala, who is now in a Bangalore jail in disproportionate wealth case and recently expelled from the AIADMK, had cut even the powerful off all access to see her in the hospital. Last month, a couple of days after Srinivasan’s apology, the AIADMK government named retired high court judge A. Aru­mugasamy to probe the circumstances that led to Jayalalitha’s hospitalisation and the ensuing treatment.

That a one-man commission was coming was spelt out at the height of a war within the AIADMK’s factions led by chief minister Edappadi Palanisamy and his predecessor O. Panneerselvam.  The announcement was part of a proposed merger package between the two warring groups, which eventually united before the Speaker disqualified 18 AIADMK legislators led by Sasikala’s nephew T.T.V. Dhinakaran for defection.

The camp led by ousted AIADMK leader T.T.V. Dhinakaran (above) says bids to turn suspicion towards V.K. Sasikala are part of a campaign.

There is no denying that a smokescreen had been created about the exact nature of Jayalalitha’s illness. The treatment she got was publicised through vague and brief medical bulletins that were later found to be specious. Panneerselvam, who was number two in the ministry during Jayalalitha’s treatment, had himself stoked the flames of doubts about her real medical condition—after Amma’s death and once he was deposed as CM, walking out with a splinter group. Soon, demands for a CBI inquiry peaked, as rumours varied between Jayalalitha having suffered a head injury at her Poes Garden residence to her gangrene-inf­e­c­ted foot being amputated.

To counter the negative narrative, the state’s health secretary finally released in March a self-explanatory note—and buttressed it with medical summaries from Apollo as well as an AIIMS medical team from Delhi. That detailed how Jayalalitha was critical on admission, continued to be seriously ill with multiple complications and how her prognosis was “not really positive” despite the “world-class” treatment. Now that a probe is to begin, the hospital may wave this medical summary along with that of the AIIMS doctors to deflect doubts about its medical mismanagement.

That would bring the pre-hospitalisation period under closer scrutiny, as the term of reference ominously includes the situation leading to admission in Apollo. The probe lens would then stay focused on the immediate caregivers at Jayalalitha’s residence: Sasikala and her relatives, who included two doctors. The Sasikala family will have to come up with convincing replies before Arumugasamy.

Already Dhinakaran has revealed that Sasikala had taken a video of Jayalalitha after the then CM was moved to the step-down ICU. First he had claimed the existence of a video footage from the hospital’s CCTV cameras, but Apollo ref­uted it. The Dhinakaran faction puts up a cool face. “Neither Sasikala nor her family has anything to hide. Our Chinna­mma will disprove all these charges,” states V.A. Pugazhendi, the Karnataka-in-charge of TTV’s faction. “It is part of a slander campaign. Why did the governor himself state that Jayala­litha showed a thumbs-up to him?”

Impartial observers have raised a few questions, especially after a TV channel released the other day the report of Apollo’s ambulance team, the first one to respo­nd to the emergency call from Jaya­lalitha’s residence. “Why was an ambulance not stationed at the CM’s house when it is part of her regular convoy?” points out political commentator Dr. Sumanth Raman, a medical consultant. “If Jayalalitha was being treated at home where nurses attended to her, why was even basic life-support system like an oxygen cylinder not in place?”

A senior physician notes that the amb­ulance team had recorded Jayalali­tha’s oxygen saturation on the night of September 22 at an abysmal 48 per cent. “She was unconscious; her sugar was a crazy 502 (against the normal 140),” he recalls. “Even for a chronic diabetic like Jayalalitha, anything above 300 should have rung the alarm bells. Records released so far show that insulin was adm­inistered orally and not through shots, which would have brought down the sugar to manageable levels. Whether she was prescribed the right medicines prior to hospitalisation will top the list of questions by the committee.”

According to sources, the family’s “arr­ogant behaviour” put off many specialists who had treated Jayalalitha in the past. So much so, it was Sasikala’s relative, a plastic surgeon (and not a diabetologist) who was supervising Jayalalitha at home. “The line of treatment was often decided by the family; not the doctors,” claims a lawyer close to the family. “Sasikala used to administer medicines as per auspicious hours and not at the prescribed time. Many of us who had seen the family in close quarters know this, but who will disclose it to the commission?”

Palanisamy is using the assembly, courts and the Election Commission to take full control of the AIADMK. For him, the mystery behind Jayalalitha’s death has become another political weapon to keep the Sasikala family under check. As the upcoming probe will shift the media coverage to charges and counter-charges, Tamil Nadu will witness yet ano­ther round of bizarre political drama.

Questions That Are Unanswered

A Prayer Sent Out Loudly