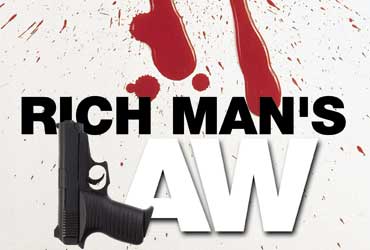 outlookindia.com
-0001-11-30T00:00:00+0553
A granite plaque in Delhi's Prithviraj Road cemetery strangely sums up the murder that took place at socialite Bina Ramani's upscale Tamarind Court restaurant on a muggy April night two years ago. This squarish vault contains the cremated remains of model Jessica 'Shona' Lall, who, the epitaph ambiguously notes, "left us suddenly under tragic circumstances"—an unprovoked shoot-out during a drinks-serving session at the eatery's busy bar. It's been two long years and with time those 'tragic circumstances' have further been fuzzed by the disparate accounts of three eyewitnesses of the murder. With each trial court hearing, Manu Sharma, the main accused and son of Congressman Venod Sharma, grows confident in the belief that his acquittal may after all be just round the corner. "Once he gets bail, we don't know what will happen to the case," says Jessica's distraught sister Sabrina.

It's frightfully evident that the three witnesses have been 'influenced' for a price to backtrack on their statements made to the police. One witness, Karan Rajput, an out-of-towner visiting the eatery, in fact, had assured the Lall family that though "he had taken money from them, he would depose for us". In court, however, Rajput denied even being in the city at the time of the murder. "But what really shocked us was the extent to which Shayan Munshi (the prosecution's star witness) lied. I myself have seen Shayan serving at the bar before," says Sabrina. Munshi was not only a key witness but also a complainant in the first information report (fir) up until he swaggered into the court of Additional Sessions Judge H.R. Malhotra with a posse of securitymen and lawyers to claim that the killer was a man taller and bulkier than the accused.

Such shameless retractions of witness statements, a vital and necessary component under India's evidence laws, in a slew of cases around the country point to a grim conclusion: as in everything else, the law in India ends up favouring those with pelf and influence. They continue to break it with impunity and get away with it.

But the tragedy is that such instances of skewed justice are now becoming the norm rather than the exception. "These days, cases are being fought outside the courts on money and muscle power," says joint commissioner of police, southern Delhi, Amod Kanth, who was investigating the galling bmw case where a speeding car mowed down six people. The main accused, arms dealer and retired naval chief S.M. Nanda's grandson Sanjiv Nanda, was granted bail in October 1999 when the lone survivor and eyewitness, Manoj Mallick, altered his statement and claimed it was a truck that caused the deaths. Mallick's change of heart and vision may be shocking to people outside the realm of criminal proceedings but his behaviour is symptomatic of a larger epidemic. "In over 80 per cent of cases, witnesses turn hostile as the police is used to fabricating statements to make their cases stronger," says counsel R.K. Naseem, one of the many lawyers fighting for the defence in the Jessica Lall case.

But Naseem's observation isn't as objective as it seems. He's one of the many successful and 'reliable' defence counsels who guarantee bail and acquittal for the rich and the famous. Therefore, it's not surprising when he stands by prosecution witness Shayan Munshi in saying that his turncoat statement in court was "absolutely true" and curiously suggests that friendship between Jessica and Shayan was impossible as the two had "12 years between them".

How this venal and unscrupulous system of legal defence works can be indicated by the example of bmw survivor Mallick. A resident of Jajpur in Orissa, Mallick received his first instalment of silence money in September 1999 from two Nanda emissaries, who claimed to be reporters from Delhi, allege villagers. The money, unknown to Mallick, was allegedly swallowed by a small-time Congress leader and principal of a local women's college, who was brought in by the Mallick family to act as mediator. When Manoj Mallick refused to toe the altered eyewitness account because of the Congressman's supposed double-crossing, another deal was worked out.

Soon after, Mallick—with three of his friends—proceeded to Delhi by air to testify in the case. He was reportedly hosted lavishly and recompensed with another cash instalment by the Nandas. His medical treatment was paid for and according to Sashanka Sekhar Das, a local mechanic and friend, Mallick was absorbed in one of the Nandas' firms where he's currently rendering some unspecified and unskilled "light work" because the 'truck accident' has incapacitated him for physical labour. Shambhunath Routray, Manoj's nephew, corroborates that the two had stayed with the Nandas while in Delhi for the case-changing hearing in October 1999.

In another shocking judgement two years ago, Santosh Kumar Singh, a student accused of raping and strangling 25-year-old law student Priyadarshini Mattoo, was acquitted because Additional Sessions Judge G.P. Thareja found inconclusive evidence of both charges. Priyadarshini Mattoo's body was found under her double bed in a torn T-shirt (pulled up to her chest) and riddled with 19 injury marks. Her wounds included three broken ribs. It was duly established that she had been battered and then strangled with the wire of a heat convector. The case was given to the cbi on the request of the city's police commissioner since the Delhi police was considered to be an interested party—Santosh's father, J.P. Singh, was an ips officer. "The judge himself was convinced of the charges levelled against Santosh Singh. He said that Santosh was the culprit," says C.L. Mattoo, Priyadarshini's father, who now lives in Jammu.

Delhi-based retired major general Ramesh Mehta is another disillusioned parent. The killers of his 19-year-old son, Rohin, have similarly been acquitted in a judgement pronounced by trial court judge C.S. Mittal in February 1999. "The written judgement came 20 days after the judge had already told the accused in court 'acquittal ho gaya hai, ab tum bhaag jaao (you have been acquitted, now run away),' after which he literally ran to his chamber," remembers Mehta. On the fateful night of September 14-15, 1990, Rohin was first throttled, then hit on the head and finally doused with petrol and set on fire. The accused in the case were Sumesh Tripathi, grandson of the late Congress stalwart Kamalapati Tripathi, Manoj Nafri, whose father is an ias officer, and Gaurav Kumar, son of the then aiims director (statistics).

One doesn't have to be in the capital to flex one's political muscle. News of the latest acquittal comes from Bihar, where Lalit Yadav of the rjd has been freed of all charges. In a case that was splashed in all horrific detail, Yadav, then a state minister, had last July imprisoned and tortured Dinanath Baitha, a Dalit truck driver in his employment, and a cleaner, Karu Ram, accusing them of theft. During his confinement, Baitha was starved, forced to drink Yadav's urine and had his nails pulled out.But after first moving the courts, Baitha disappeared, probably fearing for his life.

In a scenario where judges time and again invoke the sympathetic charter of the Indian Penal Code which professes that it is better to let off 100 guilty rather than convict one innocent person, the interpretation it's used for only makes a mockery of a noble intent.

In Mumbai, lawyer Viren Vashi is a victim of delayed guilt today—and realises how the law favours the rich. Four years ago, a magistrate gave a favourable verdict to his client Puru Rajkumar, son of the late actor Rajkumar. On December 7, 1993, Puru's car ran over a cluster of pavement dwellers in Mumbai, killing three and maiming one for life. A paltry sum of Rs 30,000 per dead victim was the fine fixed for the 'accident'. Puru had pleaded not guilty to the prosecution's charge of rash and negligent driving. It was also alleged during the course of the trial that Puru never once called on the families of the victims and was in fact seen partying soon after the incident. Vashi, who argued for Puru, begging for mercy on the grounds that his client's film career would suffer if he was imprisoned, says today: "I do think the verdict was unfair. Compensation of Rs 30,000 is a very mild penalty and it certainly was in Puru's favour." Priyadarshini's mother Prof Rageshwari Mattoo also has to live with the terrible reality of having lost her daughter. "Justice seems to be a dream but we still believe in the Indian judiciary, I hope justice is delivered before our death, otherwise it won't mean much to us," she says today.

"It's a marketplace where everyone shares the loot," is what Mehta has to say of the malaise that afflicts the country's legal system. "It took nine years to examine 48 witnesses and still the trial ended in acquittal," he says. Adds joint commissioner of police Kanth: "The nexus between the defence, the prosecution and the accused has been recorded in many cases. In the bmw case itself, I prepared a report indicating this unholy alliance when the counsel had alleged that we (the police) had hijacked eyewitness Sunil Kulkarni." Interestingly, I.U. Khan, one of Delhi's most successful criminal lawyers, says Kanth approached him to fight for the prosecution on a token fee because he felt the police was up against a very moneyed and powerful opponent. However, Khan insists that the court had especially asked him to take the case since "they didn't want just any public prosecutor to fight the case". Not surprisingly, it was the prosecution that botched up the case by alleging in its record that the killer wheels belonged to a red Contessa and not a speeding bmw or even a truck.

Thirteen days after Jessica Lall's murder, a similar incident in Lucknow shocked the country. This time, it was a dsp's drunken son and the reason he shot an ice-cream parlour attendant at a Baskin Robbins outlet was because the attendant couldn't provide him a slice of cassata, something the shop simply did not stock. Today, Rakesh Kumar Mishra roams around freely and the case is yet to reach the trial stage.

"This 'system' exists all over the country," says a dejected S.K. Saxena, prosecution counsel in the Jessica Lall case. It is a frustrating job for underpaid prosecution lawyers to argue cases against a battery of high-powered and hugely renumerated defence lawyers. The law is definitely on the side of those who can circumvent it. Thareja, in his 450-page verdict in the Priyadarshini Mattoo case, did raise the issue by noting: "Should not the makers of the law consider that where crime is committed by such an (influential) person, there should be a machinery that is uninfluenced and independent and which believes in fairness?" But such sparklers of wisdom have a way of getting lost in the cash-rich pursuit of justice in India.