With millions going hungry every day, India just cannot afford to send off this staple foodgrain 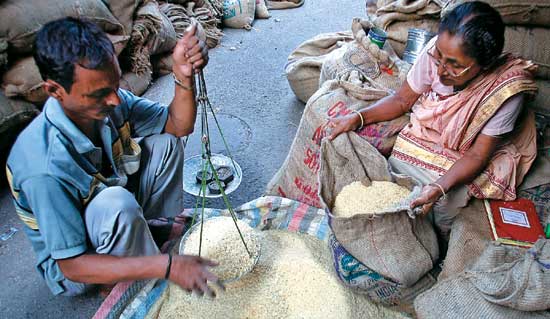 According to official government estimates, there are 360 million Indians below the poverty line who go hungry every day. But according to Dr N.C. Saxena, commissioner to the Supreme Court on food security, there are nearly half-a-billion Indians who are in urgent need of food security. With so many hungry millions, does it make sense to allow export of non-basmati broken rice, which forms the backbone of the public distribution system in India?

“Absolutely not, exports must be banned and it must be enforced,” says Dr Saxena, who has been battling for years to push in greater food security for India’s teeming hungry and undernourished. Despite the ban, there were adequate loopholes to ensure that the ban was circumvented, and statistics show that our rice exports have actually gone up, he says. “This issue must be raised in Parliament. How will we feed our poor if broken rice is exported, which can be ill-afforded by a poor and hungry country like ours?”

In fact, during his tenure in government as the secretary, Planning Commission, Dr Saxena had opposed the export of essential food grain commodities. However, rice exporters have suggested a middle path. They feel that the ban should be lifted for the superior, and therefore more expensive, broken rice varieties, which couldn’t be afforded by those who depend on the public distribution system. This would help achieve a healthy balance between the need for exports as well as ensuring greater food security.

However, Dr Saxena introduces a note of caution based on experience. “From 2001 to 2004, when India was facing a food crisis, we exported rice almost at BPL rates. This in turn was used as cattle-feed in other countries. So this has to be stopped and if we must export, then we must also import rice which is affordable and can be issued to the poor through the public distribution system.”