Revel Without A Pause

Starting past midnight and continuing till dawn, the after-party has become serious business 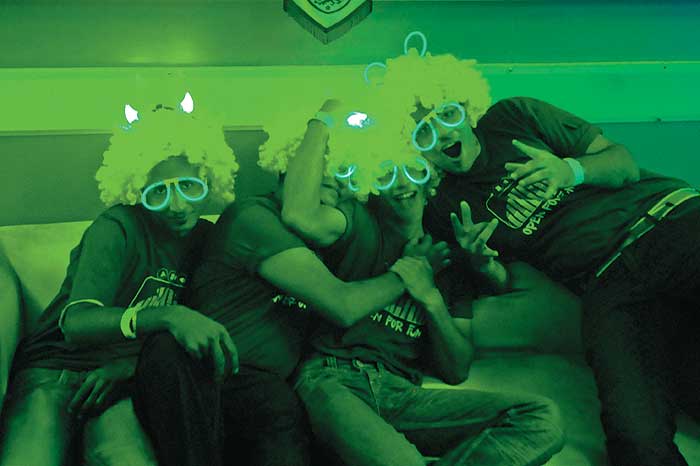 The night has always been a double-edged thing. A certain allure hangs about nocturnal creatures— something to do with cheating the order of nature and sinful pleasure. And that smell of danger lurking around the curve in the road. There were always those who couldn’t resist this combination—but they were a minority, fated to be seen as not ‘normal’.  A curious reversal of norms is unfolding in Indian cities now. Witching hour only marks the onset of frenetic social action: an endless carnival of excess by and for the opulent classes. And it’s not a cult, but a blooming religion. A deluge.

Welcome to the after-party. You can find the 2 am crowd across India, people with cash to burn and attitude to spare, finding ever-new ways to chase the dawn. The young thrill to a new extreme sport dubbed drag racing—that very modern, and sometimes morbid, act of letting an expensive car or bike rip down an uninterrupted stretch of highway. 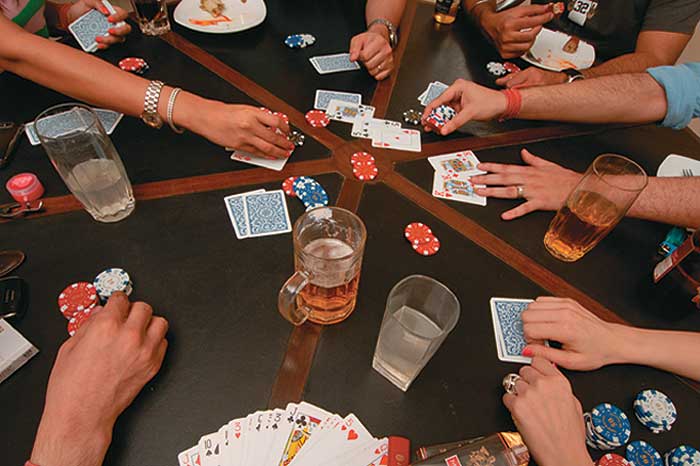 On Delhi’s eastern edge, the eight-lane, 9-km-long DND Flyway turns race-track after midnight. Hyderabadis burn the rubber all the way from kbr Park, Jubilee Hills, to HiTec City. In Chandigarh, 28-year-old Amar Sidhu rides his Rs 12-lakh, Honda CBR 1000RR on the empty IT park stretch at a wind-whipping 150 kmph. Lest you aren’t impressed, he lets you know, “I have managed to do 292 kmph on this bike. The Dera Bassi highway is another favourite, especially the flyover.” 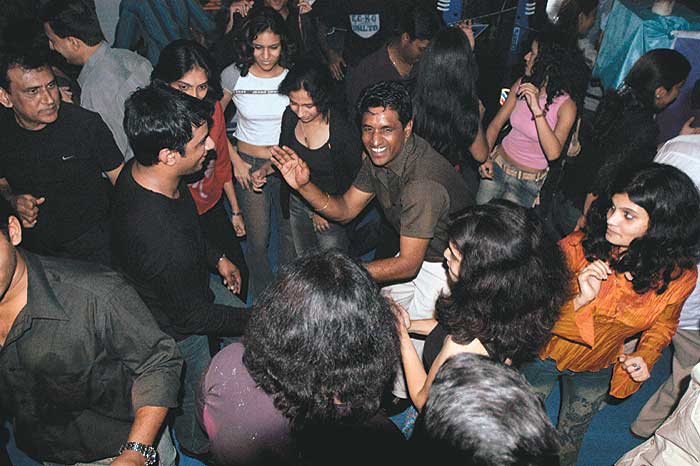 Says Hyderabad’s Additional Commissioner of Police, Traffic, C.V. Anand, “Rich kids with fast cars and money to burn get on to these roads after they are done with their pub-hopping. These youngsters sometimes bet for jaw-dropping sums like Rs 20 lakh. Dodging the law is a major part of the thrill for them. Many hit speeds of 150 kmph and pose severe danger to themselves as well as others. These bikers and car racers even have groups on Orkut and decide on venues in advance.” 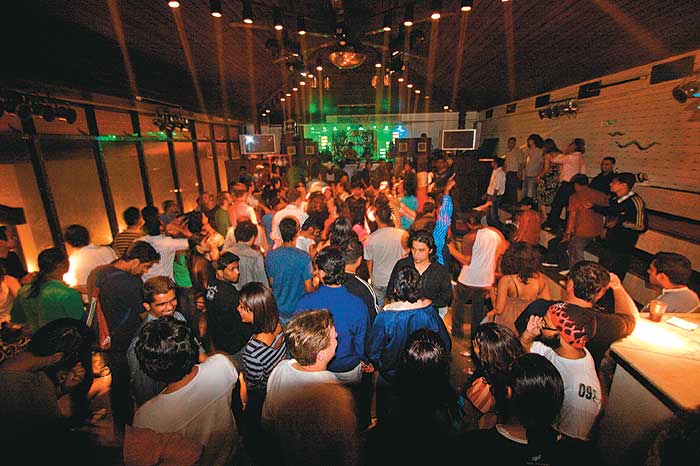 The 2 am crowd is certainly serious about their partying. In Delhi, a typical evening would begin at a friend’s house followed by clubbing and rounded off with a drive to Noida or Gurgaon to get alcohol as late as 6 am. The Gurgaon stretch of NH-8 comes alive past midnight when some of its dhabas dole out techno beats, alcohol, cocaine or Ecstasy to send you the high way. South Delhi’s opulent drawing rooms begin to serve the finest single malt as the first hand of poker is dealt. The really rich and influential head for the very lap of luxury, an exclusive nightclub at Hotel Samrat, a stone’s throw away from the prime minister’s house, where membership is over a lakh per year, and all the privileges extend up to the waking hours. 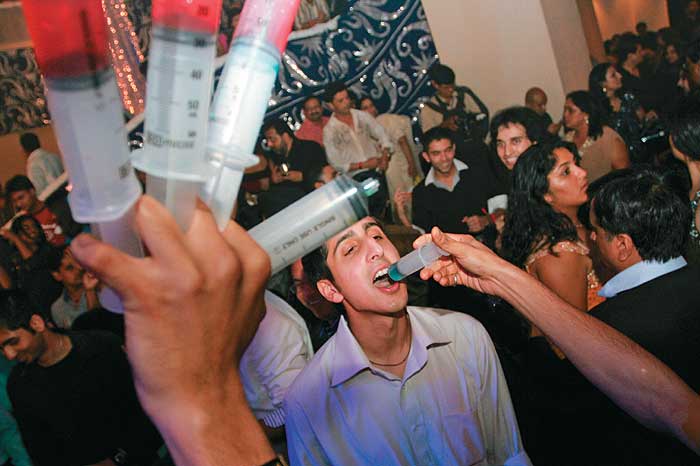 The Mumbaikar dashes off to Khandala or Alibaug with a car full of booze on weekends. Else, there are places like the Haji Ali juice bar which are open late into the night. Empire restaurant, adjacent to the famous Koshy’s Bakery,  is where the Bangalorean heads to spend a late night while Desmonds offers dinner and drinks till 3 am. In Calcutta, we meet Bubbly at Tantra, the Park hotel discotheque, well after midnight. She has her left arm in a cast, which she tells you she hurt in a car accident last week while heading home with friends at 4 am. “It wasn’t drunk driving as was reported, we skidded because it was raining,” she says. It hasn’t stopped her from partying a week later. 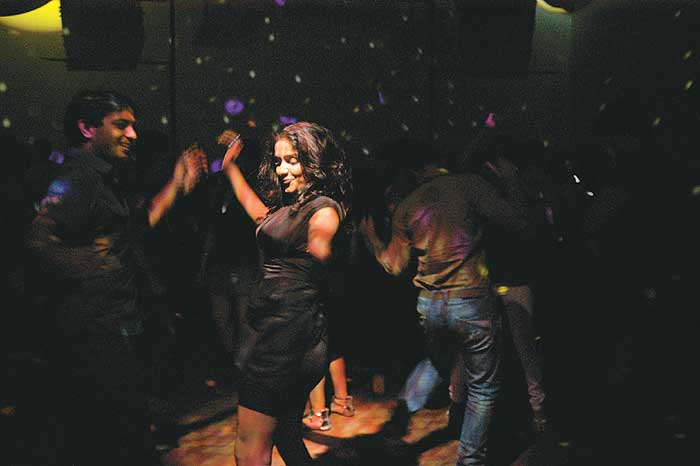 Calcutta is actually the most liberal when it comes to “official” timings. It’s the only city in the entire country where pubs are allowed to stay open till 4 am. Delhi and Mumbai are more conservative by contrast, having to wind up by 1.30 am. Chennai and Hyderabad are supposed to call it a day half an hour earlier, at 1 pm, while Bangalore struggles to extend its deadline from the party-pooping cut-off of 11 pm. But few heed the official deadline; it never comes in the way of the partying lot.

Nor does age. The 40-plus party as hard as the 17-year-olds. Once, college kids made up a significant chunk of the entry-level party-goer. Today, the new-age urban Indian has the money and parties even harder. Affirming the trend, Dhiraj Arora of upscale lounge bar Shalom in Delhi says, “It’s the new Indian who is really making the cash registers ring as far as party circuits go. They are the ones who are work and take responsibility early on, are ambitious, enterprising and therefore reward themselves with what they deserve—a good time.”

Once the college crowd made up a significant chunk of the entry-level party-goer. Today it’s the new-age successful Indian who works hard and parties even harder.

The men and women also believe it’s not enough just to be seen partying, you have to dress the part too. Power dressing is a sign of money and a regular party-goer is aware of what makes him part of the elite club.. Women therefore can be seen in couture designer wear, oversized handbags and Jimmy Choo heels. The men could well complement a cigar-smoking look with custom-made Italian designer suits or flaunt Ed Hardy tees that Bollywood actors have adopted as their style statement. Accessories could include the latest model of the Blackberry or the I-phone, Ferragamo shoes and wallets, Versace belts and, of course, the personal monogrammed Zippo. Cars too are a fashion statement unto themselves. It is not unusual to see Pajero, Porsche, bmw, Merc and Fortuner suvs around Hyderabad’s Jubilee Hill and Banjara Hills areas.

Cocaine remains the ultimate party accessory. On a given night, say weekend users, they keep aside Rs 3,000 to Rs 5,000 for the drug. “The use of cocaine has increased substantially in the party circuit and it’s a common sight in hotel bathrooms even though it’s used more freely during private parties in people’s homes,” reveals a DJ at a nightclub in a five-star hotel in Delhi. “A blind eye is often turned to drug abuse within the club,” he goes on to add. “There is so much money with people. We have young people from political and industrialist backgrounds walking in here with bodyguards, throwing their weight around and even picking up fights.” 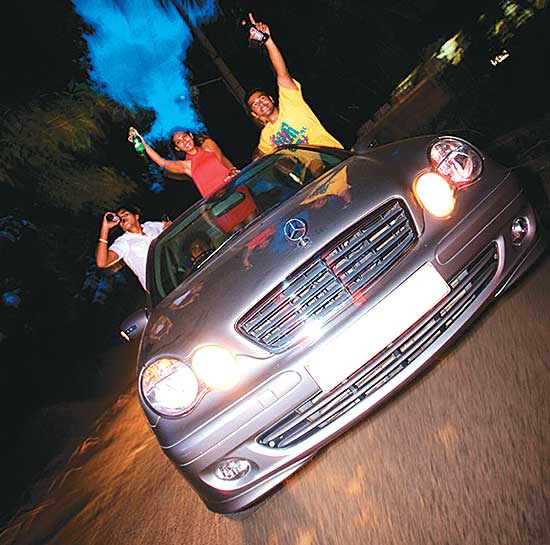 Even in conservative Chennai, rich kids no longer shy away from showing off their wealth and influence at bars. “I was in Chennai last month on work,” says Mumbai exporter Gaurav Rahi, “and had gone to the bar at my hotel, when around 1 am, three college kids walked in. After 10 minutes, I heard a gunshot. I was told the next day that they were children of influential businessmen and all armed. I was also told that this was not the first time such a thing had happened.” Apparently, the hotel took no action against the young men.

All the serious partying has obviously led to serious drinking. Club managers from different cities claim that the appetite for the poison has increased substantially and that excessive drinking is on a rise everywhere. During the recent World Cup series, pubs across the country reported selling 200-300 bottles of beer a night and double that during the big games. “We have clubs in Delhi, Mumbai and Goa,” says a pub chain owner from Mumbai, “and can say that people are drinking far more than they ever have while partying. We have seen a huge jump in all the cities. More women too are drinking now.”

In Chandigarh, the clean stretch near the IT park is where the bike racers congregate. Elsewhere, rich kids with fast cars head from the pub to the highway.

With all this booze in the belly, it’s not surprising that road accidents due to drunken driving are on a rise in all cities across the country. The Madras High Court ordered the police in September 2009 to get tough on drunk drivers since the number of those booked went up from 11,000 in 2008 to 12,000 in 2009. In Mumbai, over 5,000 people are booked for drunken driving each year. In Delhi, 1,046 cases of drunk driving have been reported this year, up from 556 in 2009. In the last 15 days, 35 cases of hit-and-run accidents have been reported in the capital, most of them late at night. Just last week, a speeding Honda City driven by a 24-year-old medical student lost control over the Safdarjung Airport flyover in Delhi, killing four labourers and injuring eight. Beer bottles were found in the car. The incident took place after 1 am. The person behind the wheel fled but was later arrested at the airport while his fellow passengers were questioned by the police and let off.

If the party people paused for a touch of introspection, they would see that the danger to others apart, non-stop partying has its downside on their health too. Explains Dr Samir Parikh, department of mental health and behavioural sciences at Max Health Care: “Initially, partying or a night out was seen as a way to destress and enjoy oneself. But when people abuse this, it has the reverse effect. A continual pattern of late nights, drinking and lack of sleep compromises our ability at work and personal life and also has an impact on our mental well-being. Young people also burn out earlier with this new lifestyle.”

This is not to tar all party-goers with the tag of being spoilt brats and rash drivers and smuggle in a less permissive regime. There are regulars who say the idea is to have fun but not indulge in reckless driving or abuse of drugs and alcohol. It’s called sensible partying and there are young men and women who let their hair down over the weekend and are no worse for that. “They are becoming more responsible about drinking and driving. However, a lot more can be done,” says Shalom’s Arora, adding that even though there are special cab services now to take late party-goers home, it’s still not very safe for women.

So while state police and governments across the country try hard to curb the party-goers’ lifestyle by setting deadlines or by simply not extending them, India is fast adopting New York’s lifestyle, where there are no deadlines and people party all night round. Whether it’s gambling, drinking, snorting coke, racing bikes and cars or just dancing the night away, the concept of partying has changed in India. All those who comforted themselves by thinking that their city sleeps by midnight, they have it all wrong. It comes alive at 2 am.

By Amba Batra Bakshi with Pushpa Iyengar in Chennai, Madhavi Tata in Hyderabad, Dola Mitra in Calcutta and Chander Suta Dogra in Chandigarh