Returns Of The Day 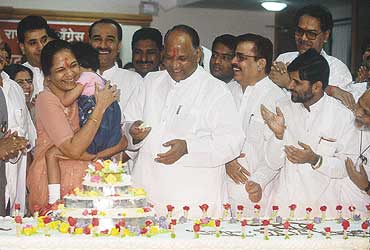 outlookindia.com
-0001-11-30T00:00:00+0553
Had it gone off as planned, it would have been an image-building bash that would have done any event manager proud. And on centrestage was Sharad Pawar, who turned 61 on December 12. Realising that Pawar's national stature was fast shrinking, the Nationalist Congress Party (NCP) MP and close friend Praful Patel came up with a novel marketing strategy. Patel pulled all the stops to hype Pawar's birthday, an event which merely made it to the society columns last year, into a national headline-grabbing, gala affair.

A high-profile panel comprising two former PMs was set up. Chandra Shekhar was appointed chairman and I.K. Gujral as one of the members. The invitation cards highlighted the fact that the PM would also be attending the do. But at the end of the day, despite the gushing eulogies, the birthday boy looked a tad disappointed. He had expected 2,500 guests at Mumbai's Royal Western India Turf Club. Only 1,200 came. More crucially, the event didn't fetch the desired headlines. While the local papers obliged, the national dailies did not give it the same coverage that was given to Sonia Gandhi's birthday just two days earlier.

For Pawar, it was a moment of truth. While there is no doubting his clout as a regional satrap, it became clear that it would take some time before he regains his stature as a national leader. In an attempt to buy time, he looked at Atal Behari Vajpayee and joked: "In Indian politics, 61 is no age. The 70s are still to come!"

Unsurprisingly, Pawar found more friends among the treasury benches of Parliament than the Opposition. While the PM agreed to grace the occasion, the Congress took one look at the invitation card and demurred, pleading an earlier engagement. Sonia Gandhi may eat hilsa with Mulayam Singh Yadav, but she stopped short of partaking of Pawar's birthday cake. Other Congressmen were quick to take the cue from their party president. There was no Congress leader of national stature present, save for state CM Vilasrao Deshmukh, who's in a coalition government with the NCP. And Deshmukh only said yes after 10, Janpath's nod.

To counter Sonia's snub, Pawar told the media that he hadn't invited her. Patel gave this spin: "Technically, this is correct. How can he invite people to his own party? The invitation went from us." Sonia retaliated by leaving Pawar's name out of the guest list to her iftar. The battlelines were drawn.

In fact, the main event at the Turf Club wasn't so much the birthday but the politics that underlined the celebrations. Sensing a possible ally, Vajpayee, perhaps mindful of the fact that Bal Thackeray had also refused to attend, showered praise on Pawar. He reminded the audience that despite their 'differences' he had appointed Pawar head of the National Disaster Management Commission. The subtext was clear. After the Bhuj quake, it was Sonia Gandhi who'd suggested setting up such a commission but it was Pawar who got the job. Vajpayee also thanked Pawar for his "objective criticism" of POTO, saying that he had the good sense not to "oppose POTO in toto". Said Vajpayee: "Some people (read the Congress) say, 'We oppose it in toto, so why should we read it'. But Sharadrao read the ordinance and we'll examine his objections."

Pawar did his share of Congress-baiting. During his speech, he said: "In Rajasthan, the Congress government wants to reform the power sector. But when the UP and the Andhra governments ask for the same thing, it opposes it." It was clear that Pawar was happy to have Vajpayee by his side. And the PM needs the support of the NCP to push POTO through should there be a joint session of Parliament.

Political observers are watching Vajpayee's response to the function planned to celebrate Shiv Sena chief Thackeray's 75th birthday next month. Sena MPs are not sure if the PM will accept the invitation. Perhaps pre-empting a snub, Thackeray has told his MPs that he doesn't want his birthday to be a gala affair, even though a 75th birthday is more of a landmark than a 61st. In an article in mouthpiece Saamna, Thackeray directed a barb at Pawar: "Birthday celebrations of national-level leaders assume significance only if they are celebrated in New Delhi."

It, however, seems it will be a while before Pawar can cut his birthday cake in Delhi.