The choice of the Stalinist structures of Pragati Maidan was matched only by other reminders to NRIs of our ugly bureaucracy. 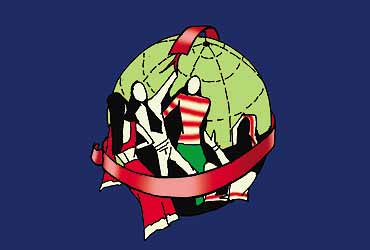 outlookindia.com
-0001-11-30T00:00:00+0553
I had scarcely arrived at Pragati Maidan on the opening day of the Pravasi Bharatiya Divas when I was confronted with a frustrating version of the Great Indian Paper Chase. As I sought to register as a reporter covering the meeting for a foreign publication, I was relentlessly quizzed by a minion of the ministry of external affairs. Had I received a journalist's visa, he asked, demanding my passport. Even as I was explaining that I was an Indian citizen, he bellowed for coffee and snacks.

When I produced my business card and photo ID, which usually suffice as press credentials at just about every conference I've covered, they were rudely dismissed. "I am unable to be of assistance," he said in a rhetorical declaration that should double as a motto for the Indian government. Security of the dignitaries present was not the issue; the meeting halls were adequately staffed with personnel conducting body searches. The problem was one we are all familiar with: the insecurity of a civil servant more interested in wielding power than getting mundane work done.

The Pravasi Bharatiya Divas was intended to be a first attempt to reach out to NRIs the world over, but instead it served as a reminder to many delegates of why they and their forefathers left India in the first place. The main plenary sessions were dominated by speeches from senior ministers with the result that many Effects of drought may be felt in few months: Rakesh Mohan ris felt like they were being lectured to, not listened to. The decision to give dual citizenship to NRIs from rich countries like the UK and the US prompted charges of apartheid.

Happily, my own sense of exclusion proved short-lived. Having been denied a press pass, I decided to attend the conference as an NRI. Since ficci jointly organised the conference along with the mea and the formalities of registration by NRIs were handled by ficci's temporary staff, this proved a much easier affair.

Organising a meet with a couple of thousand delegates is a tall logistical order, but the recent event seemed a work in perpetual progress. While ficci deserves its share of the blame, the event had tell-tale signs of government involvement: the venue was ramshackle, the conference ran behind schedule and the proceedings revolved entirely around VIPs. On the very first day when A.B. Vajpayee rose to make his address, the conference was already running 45 minutes late. Choosing Pragati Maidan as the venue was a mistake since its ugly Stalinist structures are a throwback to our socialist past. Several of the placards demarcating different sections of seating for VIPs, state government representatives and NRIs—not coincidentally, in that order of precedence—had come apart in the first hour.

The hall had the makeshift feel of a circus tent. Some Malaysian attendees were quoted as saying there was more comfortable seating available at conferences in rural Malaysia. I felt more discomfited by the memory of having attended conferences in Shanghai in the past year that were hosted with clockwork efficiency at post-modern venues that rivalled anything in the developed world.

If the organisation of the event bordered on the chaotic, its substance was just as questionable. The selection of 10 eminent NRIs to honour was top-heavy on politicians, light on businessmen. Once again the priorities of our government were all too apparent. Awards of this sort are silly to begin with, but how does one explain a roll-call of 10 eminent NRIs with no representatives from Silicon Valley, a worldwide emblem of Indian entrepreneurial success?

Although the PM eloquently said that India was seeking not the riches of its NRIs but the richness of their experience, there was little evidence of this. Delegates became restless as one sermon from a government official followed another.On the second day, several angrily complained that no one was listening to them.

It is debatable whether the exercise is worth repeating. Aside from the issue of expanding dual nationality, which should be handled by our foreign missions and the mea, the best way our government can woo NRIs is by improving the business environment in India for resident Indians, NRIs and foreign investors alike. After all, when NRIs make business decisions, they're fundamentally opportunistic. They withdrew their deposits during the '91 BoP crisis when they were needed the most and are now piling in to avail higher interest rates and the steady appreciation of the rupee.

India's rampant red-tapism hobbles the entrepreneurial efforts of every businessman, regardless of the colour of his passport. After I left the conference, a friend told me of the sobering experience of his brother in the Middle East who has been seeking land in India to set up an educational institution. The foundation stone has not yet been laid even though plenty of money has changed hands.

By contrast, the mayor of the southern Chinese city of Shenzhen—where billions of dollars have been invested by the Chinese diaspora in Hong Kong and elsewhere—has been seeking to make government officials more accountable. An official in the city's industry bureau who took more than 10 days to process a corporate approval was fired. China is notorious for corruption and approval delays and the mayor's logic is that with competition hotting up, companies will make investments based on the business environment governments provide.

As I made my way through Hong Kong airport upon my return from Delhi, I was reminded of my last encounter with local immigration officials after I discovered that my Hong Kong employment visa had just expired. Mortified, I awaited a grilling for the lapse. Instead, I was ushered into a separate room, handed a form to request an extension and was told to apply for a new visa when I returned. The entire process took five minutes. If our government aspired to such efficiency and courtesy in its dealings with citizens and non-citizens alike, it could dispense with periodically trying to put on a good show at jamborees aimed at drumming up investment.

(The author is Hong Kong bureau chief of the Financial Times.)

At Sixes And Sevens