Not Hamas but Arafat's symbol of prestige become Israel's targets 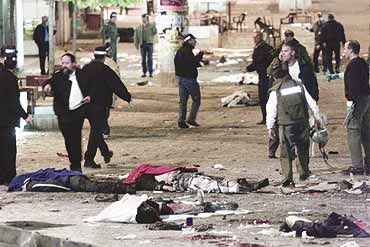 outlookindia.com
-0001-11-30T00:00:00+0553
When twins Avi and Eiran Mizrahi left home to celebrate their 15th birthday in a cosy pizzeria located in downtown Jerusalem, they had expected to spend a rollicking evening in the company of raucous schoolmates. Restaurants and bars hummed with life, exuberance filled the air. Then, at 10 pm, two suicide bombers from nearby Abu Dis village sauntered in. A blinding flash and thunderous blast later, scared survivors started to run. Minutes later, a second and more deadly explosion sprayed nails at high velocity through the fleeing crowd of diners. The nightmare didn't end there: a third bomb detonated at the arrival of the rescue team. The toll: 10 dead, scores wounded.

Avi and Eiran are in hospital, disfigured beyond recognition. This is the way an evening in Jerusalem suddenly ends; and this was yet another bloody episode in the series of macabre incidents that have rocked Israel in the last 10 days. In a suicide bomb attack on a bus in Haifa, the victims could be identified only through dna tests.

Post 9/11, in the ongoing war against terror, the attack in downtown Jerusalem couldn't be condoned, definitely not by hawkish Israel premier Ariel Sharon. But what was different about the Israeli retaliation this time round was Sharon's decision to target Palestinian Authority (PA) leader Yasser Arafat, although Hamas had owned up responsibility for the attack. For Sharon, it was yet another opportune moment to portray Arafat as "Our Laden", guilty of orchestrating violent attacks on Israelis.

Israel decided to hit symbols of Arafat's prestige, his helicopters and cars and the runway in Gaza the leader uses. Targeted also were Arafat's local bureaus (which run administration) in several towns; his principal bureau in Ramallah was not touched but an office of the Palestinian interior ministry nearby was totally devastated. Says Jerusalem mayor Ehud Olmert: "Our aim is to get rid of Arafat, not kill him. It is a mistake to believe that once he is ousted, Hamas will take over. Arafat's lieutenants—Jibril Rajoub in the West Bank and Muhammad Dahlan in Gaza—should be forced into fighting Hamas."

But most Palestinians took the attack on Arafat as a personal humiliation, suggesting such measures could only widen the chasm between them and the Israelis. The response of Muhanna Khawaja, who works in a gas station near Ramallah, is typical: "Israel shouldn't target Arafat. What could he have done? He can't control Hamas because he doesn't have a state; he can't control the situation because Palestine is under occupation." Muhammad Jiddo, a student in the Al-Quds university in Abu Dis, thinks "the Palestinian Authority is corrupt and incompetent, but humiliating Arafat meant a humiliation for me, and all the Palestinians".

The more politically savvy perceive the attack on Arafat as nothing more than Sharon's ploy to scuttle the peace process. Says a senior Palestinian official in Ramallah: "Sharon doesn't have any peace agenda. He is after Arafat because he wants to occupy West Bank again. Sharon has put the Labour Party in a golden cage. Its leaders won't challenge him. When President George Bush began to arrange their coalition against terror, he courted us—but we always knew he wouldn't be able to stand before the Israeli lobby. There is nothing to do but expect the worse."

The incident has also divided Israel's Unity Government. Sharon's group wants to ease out Arafat, but plans to do it gradually till, as one member of this group told Outlook, "those who are addicted to Arafat sober up". But foreign minister Shimon Peres disagrees vehemently with the strategy of getting rid of Arafat. Those close to him say: "Even if there is no Arafat, Israel will have to invent him. Israel cannot tolerate a situation in which it has no partner to talk peace to. We have nobody else other than Arafat."

Last week, Arafat's police were engaged in clashes with Palestinians protesting the house arrest of Hamas leader Sheikh Yassin. Post 9/11, this is the second high-profile incident in which Palestinians have fought fellow Palestinians, raising the spectre of a deeper split in their ranks. Forty-eight hours after attacking Arafat, Israeli warplanes again began targeting Palestinian buildings.

For the Palestinian, it is the US which is to blame. As Saeb Areiqat, minister for municipal affairs and veteran negotiator with Israel, puts it: "The Americans only support the Israelis. For them, Israel's suffering matters, not Palestine's. It seems Washington's next target after Afghanistan is Palestine." Anti-Americanism gets yet another another boost in the Arab world.

Naya Savera, the waste management project with a social spin-off