Resurrected To Be A Pawn

Is the debate on Tipu’s secularism anything but an oversimplification of history? 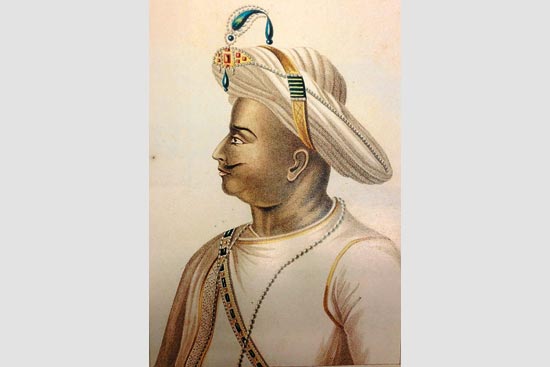 Past Tumkur on the Bangalore-Pune National Highway (NH 4) and towards Sira in the north is the small village of Sibi, home to the Narasimha Swamy temple. Step inside this impressive temple and raise your head towards the ceiling of the Gopuram (gateway). Now slightly disfigured and slowly losing lustre, the paintings clearly show Hyder Ali and Tipu Sultan prominently. In a hunting scene, Tipu, famously known as the Tiger of Mysore, is shown singlehandedly slaying a tiger with his sword!

What is Tipu, perhaps the Hindu Right’s favourite poster child for Islamic bigotry in India, doing in a temple? Kate Brittlebank, the Australian historian, calls this temple the “physical embodiment of the character of Tipu Sultan’s rule” and argues against interpreting Indian kingship as Hindu or Muslim. The builders of the Narasimha Swamy temple, Nalappa Fauzdar Karnik and his brothers, prospered sufficiently serving under Tipu and when they built this, it was but quite natural for them to voluntarily have their sultan depicted among past kings. Significantly, Tipu doesn’t seem to have offered gifts or grants to this temple, as he did to hundreds of other temples in his kingdom. Clearly Nalappa doesn’t see his patron as Muslim and Tipu’s faith isn’t an impediment for his presence at the temple. Why then is the Hindu Right eager to portray Tipu not only as Muslim but as a cruel, religious bigot and a usurper of the Mysore throne?

Sure, there is considerable evidence to suggest that Tipu forcibly converted large numbers of Hindus and Christians in Malabar, Coorg and Mangalore. He is also said to have mercilessly and violently crushed the oppo­sition in these above-mentioned peripheral regi­ons of his kingdom. While the Hindu Right characterises this as evidence for large-scale conversion and therefore religious intolerance, a more plausible expla­nation is the suggestion that religious persecution is a political strategy. Perhaps such an interpretation doesn’t provide solace to the progeny of his victims in Coorg or Malabar. However, consider that Tipu doesn’t undertake any mass conversion in the core regions. In fact, from Iltutmish to Tipu, Muslim rulers realised large-scale conversion to be unsustainable. During Tipu’s rule, few Hindu elite and some Europeans converted to Islam, married into Muslim nobility and recei­ved higher offices, which is consistent with conversion patterns across medieval India.

Accusations of cruelty against Tipu (and his father Hyder Ali) are not made only in the context of conversions. British officers, especially Tipu’s prisoners, have left behind detailed accounts of the cruelty and torture they suffered.  Further, accounts of devastation caused by Hyder’s raids on Madras region too are legendary. Many of these accounts are quite reminiscent of Mutiny-era British narratives and contain exaggerations. The Hindu Right, which otherwise rejects British accounts of Indian past, enthusiastically endorses these prisoner accounts as proof of Tipu’s cruelty. Tipu’s treatment of his officials—publicly hanging some or keeping families of others hostage while they served outside the capital—is also offered as further evidence. However, the Hindu Right doesn’t seem to notice that such behaviour is quite common in pre-modern India. From Ashoka to Krishnadevaraya, emperors were suspicious of their commanders and governors. Moreover, Hyder Ali and Tipu are accused of usurping the Mysore throne. Had they been Hindus, the father-son duo would have been greeted as legitimate rulers who filled a political vacuum created by incompetent Wodeyar kings. Tipu’s critics question even his administrative measures such the introduction of a new calendar. They consider his int­roduction of Persian as evidence of his “anti-Kannada” stance. Dr S.L. Bhyrappa even argues that Tipu is res­ponsible for Kannada not being the language of education in Karnataka today. But if the Hindu Right is determined to see Tipu as a cruel, religious bigot, the pro-Tipu secular camp too offers an anachronistic narrative depicting Tipu as a secular, nationalist, freedom fighter. In this view, Tipu alone among Indian rulers of the 18th century understood the British colonial project. Hence he didn’t compromise unlike his more powerful rivals, the Nizam and the Marathas. The pro-Tipu camp refu­ses to acknowledge that throughout the 18th century the English India Company acted more like an Indian power, not a foreign invader and that’s the reason it succeeded in acquiring territory. If India wasn’t colonised yet and if nationalism wasn’t a thing, how could Tipu be described as a nationalist? Further, Tipu was tolerant of other faiths and patronised more than 150 temples. Does that make him secular? Or can we find a different vocabulary?

How then do we recognise the historical significance of Tipu, who has become a deeply polarising figure? Tipu is an extraordinary historical figure but consider my more modest suggestions. First, between 1760 and 1795, the American rebels and Hyder Ali-Tipu duo constituted the most significant threats to the global aspirations of the British. In this era, whether Tipu understood the nature of British imperialism is irrelevant. Yet his stand against the British from his location in Mysore made him a global player. While Tipu’s various embassies to Turkey and France are seen as internationalism, I am not entirely convinced. Secondly, Tipu’s innovations in administration, especially revenue settlement and economy, are generally ignored in discussions of his significance.

In this fever­ishly polarised debate, there was no place for nuance as the ruling Congress government was determined to celebrate Tipu’s 265th birthday and the BJP was equally committed to oppose. The three lives lost in Madikeri obviously haven’t tempered the mood.

(Prithvi Datta Chandra Shobhi is a social historian based in Mysore.)

A Tableau Of Feelings