Results From The Lab

The secularists will spin theories which they had laboured to establish in the post-Godhra carnage. But to me, it was a vote against the paradigm of blind hate which the secularists had arduously crafted against the Sangh parivar. 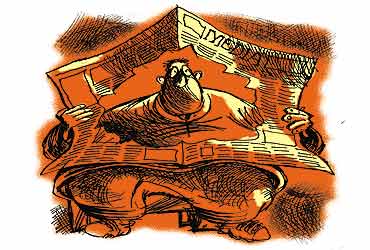 outlookindia.com
-0001-11-30T00:00:00+0553
The BJP's landslide victory in Gujarat is not a 'modicum' event—and it will continue to haunt 'secularists' for a long time. The secular cabal will now speculate on the reasons leading to the collapse of their hard-built paradigm and its fallout—both in national politics and within the BJP. But few will want to remember their own contribution to the verdict—the fruitless cerebral labour in demonising one man, Narendra Modi, and the lynch-mob mentality with which they hunted the Sangh. In hindsight, do they have any answers: what does Modi's win prove to the hapless secularists? Is the so-reported Hindutva experiment in 'Gujarat's laboratory' successful? Has the 'state-sponsored pogrom' been endorsed by the people?

The secularists will spin theories which they had laboured to establish in the post-Godhra carnage. But to me, it was a vote against the paradigm of blind hate which the secularists had arduously crafted against the Sangh parivar. It hurt Gujarati pride and Hindu sensibilities in general, creating conditions conducive to the growth of the tumour of terrorism in India's polity. The vote was also an endorsement of the good work the BJP government had done during its decade-old regime.

The verdict also shot down the dynasty concept, personified by Sonia Gandhi presiding over the destiny of India's oldest political party. And what to say of her team-mate Laloo Prasad Yadav, who trusts secularism only with his wife. The Sonia-Laloo kinship phenomenon was reflected in the Congress' distribution of tickets in Gujarat too, where 15 candidates were spouses, siblings, or sons/daughters of state leaders. Barring one (Amarsinh Chaudhary's son), all others (including a progeny of Shankersinh Vaghela) lost.

There is little doubt that the secularists' double-barrel gun —dividing Hindu society on the basis of caste and herding the Muslims together under a fear psychosis—backfired this time. A lot has been spoken about the polarisation of votes on communal lines in Gujarat. The BJP has been accused of this since the Jana Sangh days. But the same people see nothing galling in the divisive 'secular' ploy of scrambling the electorate on casteist lines. It was the Congress which introduced the kham (Kshatriya, Harijan, Adivasi and Muslim) polarities. If divide and rule is often ascribed to the British, the secularists invented 'sub-divide and rule'. No wonder that former PM V.P. Singh, who sought to split Hindu society vertically in the name of social justice, is their poster boy.

The secular cabal (Laloo in Bihar, Mulayam in UP, the CPI(M) in West Bengal, the DMK in Tamil Nadu, the Congress elsewhere) has continued with the pre-independence political perversion—that the Muslim electorate should vote en masse. Gujarat saw the Ahmedabad Jama Masjid Imam, Maulana Mohammed Shabbir, exhorting the Muslims to vote en bloc for the Congress. That it was a foolish move, pregnant with a backlash from the majority community, was an afterthought. The secularists did not approve of it as strategy only to the extent that it was counter-productive (read beneficial to the BJP) and not as a matter of principle. In which election has the BJP not been maligned as 'fascist', 'communalist' and 'Hindu fundamentalist'—towards whom Muslims should be 'anti-polarised'? So, if one section is always anti-polarised to the BJP on grounds of faith, no reason why the rest of the chunk, much larger in size but not as politically conscious, should not get polarised to the BJP.

The secular hacks try to explain the Gujarat results as an outcome of the communal divide, following the successful "hate campaign" by the Sangh parivar. Nothing could be further from the truth. If it were so, how do they interpret the BJP's victory with increased margins in the three assembly by-elections in Rajasthan and the Lok Sabha by-election in Jharkhand.The results were a vote against the divisive politics the secular cabal has been indulging since Independence. This time, the BJP was successful in underlining this reality to the voters.

Right from Gandhiji's time, secularism in India has meant pandering to the most fundamentalist elements of Islam. The abolishing of Khilafat by Kemal Ataturk was at the volition of the Turkish people, symbolically realising the segregation of religion from politics in the Islamic world. It was a rational and forward-looking move by Turkey, but failed to vibe with Indian Muslims, the majority of whom remained steeped in literatim religiosity and backwardness. By the way, Gandhiji had gone all out to support the demand of Indian Muslims for restoration of Khilafat.

One may disagree with Gandhiji's strategy (in dealing with Muslims) but none can doubt his intentions. His entire enterprise was devoted to ensure swaraj and get cooperation from all sections of society. However, the role of communists in this context is really dubious. Is it not ironical that the secular cabal is now led by the Marxists, who in the 1930s and '40s had supplied the intellectual arguments that Jinnah needed for the creation of Pakistan, and which left the subcontinent soaked in blood.

However, as if a non-event, the Partition hardly brought any change in the secularists' view of the Muslim question. They knew the Muslims voted en masse, and instead of a democratisation of the community's mindset they have sought to benefit from it. Whereas the crying needs of the community are development, modern education, hygiene, women's empowerment and reproductive health, the secularists continue to fan stereotypes amongst Muslims.

The Shah Bano case during Rajiv Gandhi's time is a classic example of the Congress keeping Muslims retrograde. Even Muslims like the Congress' Arif Mohammed Khan welcomed the Supreme Court judgment, but Rajiv Gandhi fell to the ulemas' will (for electoral benefits) and got it reversed through an amendment in the Constitution in a Congress-dominated House. A humiliated Khan left the party.

There has been a great deal of talk about the secularists prioritising the issue of development in Gujarat. But will anybody explain why they then had Laloo Prasad Yadav campaigning for the Congress? Do they deem Bihar, under Laloo since 1990, as an inspiring model of development? Were they putting their trust in his ability to hone their kham fragmentation? And why not, after all Bihar is the finest specimen of a casteist experiment in the country (which reared its head in the '90s) and surely they wanted its repeat in Gujarat.

And did the secular cabal really hope to inspire confidence in the Gujarat electorate by projecting Vaghela, a BJP dropout, for the office of chief minister? While withdrawing support to Vaghela's government in 1997, the Congress in a memorandum to the Gujarat governor had said, "The state government has neither provided a clean and efficient administration nor a democratic, secular government in the state. Unfortunately, the present government has acquired a notorious reputation as a corrupt, inefficient, weak, autocratic and whimsical government." A man condemned in such strong terms is now free of his sins after being baptised into the Congress?

The Gujarat results have also underlined the fact that the English media—both print and electronic—has ceased to reflect the social and political trends in the country. Obviously, we are living in media-times far from ideal. The Godhra fallout was a providential opportunity for the secularists to denigrate the BJP, the Sangh and specifically Narendra Modi. The malign-Modi bandwagon had assumed the form of an industry.Secularists in politics and the media, ngos, fiction writers, socialites, economists, documentary filmmakers, a struggling film actress, a turbaned saint, amateurs learning to type—more the merrier—all got publicity in the bulldoze-Modi brigade. Ironically, Modi perhaps owes his present larger-than-life image and a part of the victory to this media blitzkrieg.

The English media simply glossed over the other side of the picture: 40,000 Hindu refugees aside one lakh Muslims in the camps, the number of Hindus killed in the riots, the number of Hindus arrested in the riots, the illegal arms and ammunition recovered from Muslim localities (during the riots and the subsequent Jagannath rath yatra) —all these meant nothing to them. But the people of Gujarat, who had lived through the riots, had seen all this and also its negation in the media.

Most English newspapers were characterised by assembly-line articles targeting Modi, the Sangh and the BJP. Most of them were shallow on facts, hard on opinions. It was impossible to keep track of them all, especially when each piece seemed a clone of the other. Some, like Arundhati Roy, introduced some grotesque novelty, freely weaving fiction with facts. Having controverted some such reporting, articles in newspapers, periodicals, and on TV shows and seminars, I can't help appreciating the zeal of these secular jehadis.

In the wake of the unfortunate Gujarat riots, certain myths were also built; such as that the Sangh parivar is the reason for the communal divide in the subcontinent. India had suffered from the communal virus long before the birth of the rss in 1925. We have also seen the ethnic cleansing of Hindus from a large part of the subcontinent (Afghanistan, Pakistan, Bangladesh and now the Kashmir Valley) over the last few centuries. The faultlines responsible for communal tremors are old and deep and the secularists' ploy of throwing the blame at the door of the Sangh parivar cannot work beyond a point.

The BJP has thus won the mandate in Gujarat, contesting not against the Congress but the entire secular cabal, which managed to coopt even the institution of the Election Commission. The secularists constantly blamed the BJP for showing up the Godhra carnage as a part of public discourse. I don't see any valid reason why a civil society should be shy of discussing a terrorist act of such magnitude, particularly when the secularists vie with one another to rake up the Ayodhya demolition at the drop of a hat. The BJP manifesto, however, did not mention Godhra. And why was all this discipline reserved only for the BJP? The secularists not only shamelessly capitalised upon the post-Godhra riots in India, but also overseas.

It is a pity that a section of liberals (including in the Congress) have allowed the communists to set the agenda of public discourse. Marxism is a fundamentalist creed that seeks to destroy all values such as freedom, democracy and secularism—the lifelines of a civil society. We must remember that India is a secular country not just because of its Constitution. Rather it is the other way round; the Constitution is secular because India is predominantly Hindu. In order to retain India's secular character, her Hindu ethos has to be saved. Hinduism can live with Marxism, but unfortunately the reverse is not true.

(The writer, a Rajya Sabha MP and convenor of the BJP think-tank, can be contacted at bpunj@email.com)

The Perils Of Polarity