Beneath the bonhomie lies dissent. That's what the party should manage. 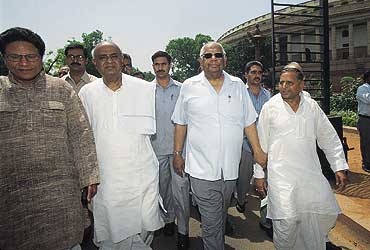 outlookindia.com
-0001-11-30T00:00:00+0553
Ensconced within Parliament, Opposition unity, which rests on a common antipathy to the ruling nda coalition, is easy. But in the maze of electoral politics, the case for unity has careened from the "need to defeat the communal menace in the interest of the country", as senior CPI(M) leader Somnath Chatterjee puts it, to the "Congress’s attitude towards the small fry", as SP general-secretary Amar Singh insists.

If the constellation of Opposition parties, including the RJD, NCP, SP and the Left, is to be believed, alliance-mongering in the run-up to the next general elections rests entirely on Sonia’s shoulders. "It has to be Soniaji’s initiative because the Congress is the only party that can provide a credible alternative to the bjp. Everyone knows that," says Raghuvansh Prasad, RJD MP in the Lok Sabha.

In fact, the Congress ‘allies’ seem resigned to two facts: that any future Opposition alliance is likely to be Congress-led, and that since the party has accepted Sonia as their leader, they too will have to. For the moment, at least, the issue of Sonia’s leadership has taken a backseat as the Opposition gropes about for a way to march onward. "The no-confidence motion didn’t belong to the Congress, it belonged to all of us in the Opposition," says Singh. "It’s a good beginning."

However, beneath the bonhomie, there runs a subtext of dissent. A lot depends on how well the Congress woos its willing but whimsical partners in the next few months. "The Congress can’t go it alone, and the sooner it realises this, the stronger the possibility of a coalition. The current political atmosphere demands coalition politics whether in assembly or in Lok Sabha polls," says Prasad. He suggests a three-step itinerary for Sonia: cultivate alliances with regional parties with an eye to assembly polls, sacrifice "personal ego" and minimise differences with partners, and work towards a common minimum programme. He adds that her advisors should heed the agendas of other parties so that alliances, instead of being opportunistic and number-driven, have a history of mutual planning. "Let her come to my house too," says Prasad, referring to the dinner at Somnath Chatterjee’s residence, which Sonia attended.

The NCP, meanwhile, is more circumspect. "It’ll take a lot of maturity on Sonia Gandhi’s part to put a pre-poll alliance together. Equality and respect are what we’ll be looking for," says its national spokesperson Praful Patel. Though the two already have a successful alliance in Maharashtra, Patel insists it won’t be a precondition for any alliance at the national level.

Though the CPI(M) has so far ruled out joining any Congress-led united front in the aftermath of the 2004 polls, Chatterjee feels Sonia’s immediate efforts should be towards "building a nucleus of leaders from the secular Opposition and creating reciprocal understanding". Singh suggests open-mindedness, civility and constant flow of communication as crucial for any alliance to succeed. The ball, then, is in Sonia’s court, and the allies of a possible future coalition are waiting to see how she lobs it back.