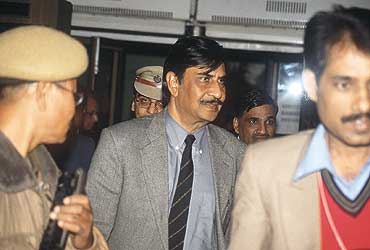 outlookindia.com
-0001-11-30T00:00:00+0553
With Jharkhand Governor Prabhat Kumar finally ending the suspense by putting in his papers on January 31, the stage is now set for his interrogation by the CBI. As the then cabinet secretary, Kumar had reportedly accepted favours from Ashok Chaturvedi, chairman and managing director of the Kanpur-based Flex Industries. Chaturvedi was arrested in November last year, for bribing chief excise commissioner Someshwar Mishra. The CBI caught Mishra red-handed accepting a bribe of Rs 5 lakh. A similar amount was found in his car as well.

It was during Chaturvedi's interrogation that investigators learnt he had bankrolled parties held at Kumar's official residence on Delhi's Prithviraj Road. In all, Chaturvedi played proxy-host for three parties. The first was a dinner held on March 5, 1999, which cost Rs 44,465, the tab for another dinner hosted on February 27, 2000, was Rs 79,218 and Chaturvedi shelled out Rs 10,368 for a high tea on July 10, 2000. Even after he became Jharkhand governor, Kumar attended a party in a five-star hotel, thrown by Chaturvedi on June 14 last year.

"What we have to now establish is if there was a quid pro quo and also find out what role Prabhat Kumar had in promoting Chaturvedi's business," said a senior CBI official, shortly after Kumar resigned. Initially, the CBI was restrained in questioning Kumar as he held a gubernatorial post. Besides, it would have required presidential assent.

But Kumar may not be the only one who could find himself in the dock in the bribery case. Should the investigating agency dig deeper and carry the probe to its logical conclusion, it could stumble on other names. A senior CBI official told Outlook that the names of a frontline, high-profile politician and a Rajya Sabha MP also figured in an "explosive" diary recovered from Chaturvedi's premises during the CBI raids last year. A 200-page confessional statement of Chaturvedi's, in CBI possession, outlines his modus operandi and lists some "prominent" personalities who helped him further his business interests.

Says a CBI official: "From our investigations so far, we find that Chaturvedi worked as a conduit for pan masala manufacturers in Delhi, Lucknow and Chandigarh. But more links might emerge as the investigations progress."

With media pressure building up, it was clear that Kumar's continuance as governor was proving untenable. When reports first surfaced in December last year, Kumar dismissed them as "frivolous", claiming he had never done anything which could lower the dignity of the civil service which he had served for 37 years.

Only after a confidential report sent by the CBI to the home ministry, on Kumar's association with Chaturvedi and his accepting "financial favours", did the Centre begin to act. Senior CBI officials say Kumar's dealings with Chaturvedi were legion and their closeness dated back to the time Kumar was a divisional commissioner in Kanpur. Says an investigator: "As a power broker-cum-businessman, Chaturvedi had unlimited access to Kumar's house."

Despite the strong signals sent out, asking him to demit office, Kumar decided to buy time and find room to negotiate. He cited a wedding in the family to postpone his decision. But with the Uttar Pradesh elections fast approaching and the Babulal Marandi-led NDA government in Jharkhand facing much embarrassment over Governor Kumar, the Union government was in no mood to give the Opposition an opportunity to accuse it of protecting "tainted" executives. A deadline of January 31 was fixed for Kumar to bow out of office or risk the ignominy of being sacked.

This is not the first time that a governor has had to leave under such a cloud. During the Congress regime, three governors had to resign on grounds of accepting illegal gratification.P. Shiv Shankar and Motilal Vora, governors of Sikkim and Uttar Pradesh respectively, had to resign once their names appeared in the infamous Jain hawala bribery case. Sheila Kaul also had to quit as governor of Himachal Pradesh after a public interest litigation in the Delhi High Court pointed to her involvement in out-of-turn house allotments. At that time, the minister of state for home, P.K. Thungon, also figured as one of the accused.

Chaturvedi and Mishra are currently out on bail but the CBI says that now, in the wake of Kumar's resignation, it will be able to make some breakthroughs. Says CBI spokesperson S.M. Khan: "We needed sanction for Mishra's prosecution which took a while coming but the probe is still on." Indeed, if the premier investigating agency is given a free hand, more names are bound to come tumbling out.