But will the JAC pass muster with the states? 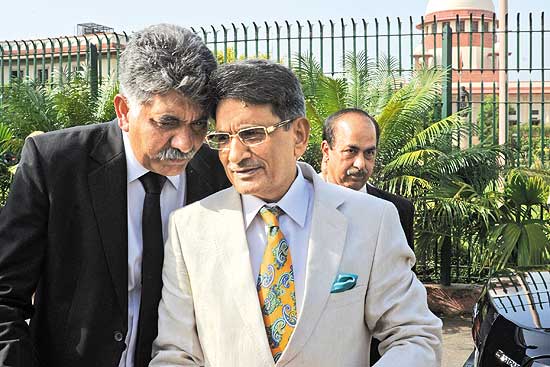 Two of the three pillars of democracy came together this week to show the third its place. The first government to enjoy a single-party majority in the Lok Sabha after 30 long years, along with other MPs, dec­ided to bury the 15-year-old system of judges appointing themselves. The unanimity on display in the Lok Sabha in passing the historic Judicial Appo­intments Bill signalled at a smo­oth passage through the Rajya Sabha as well. Bar­ring the odd discordant note str­uck by an MP or two, all political parties, including the Congress, the Samajwadi Party and the Bahujan Samaj Party, seemed to agree that it was time to bid the ‘collegium’ system goodbye. The system under which the Chief Justice of India and five seniormost judges of the Supreme Court appointed and transferred judges to the 24 high courts in the country and also judges to the apex court will be replaced by a six-member Judicial Appointments Commission (JAC) com­prising three judges, the Union law minister and two eminent citizens.

There was no empirical evidence to show that the collegium system had failed, cautioned former Delhi Uni­versity vice-chancellor Upendra Baxi at a consultation in late July. Barely 48 hours before the Lok Sabha passed the bill, Chief Justice R.M. Lodha lamented in open court attempts to condemn and vilify the collegium system. One of the MPs, Asaduddin Owaisi, warned that Parliament was handing over a blank cheque to the executive. But such voices were drowned by the tide of criticism of the “opaque and arbitrary” system. In which other democracy do judges app­oint themselves was the belligerent question asked by one MP after another even as a few tried to remind them that in India, where the government happens to be the major litigant, it would be an equally bad, if not worse, system to allow the litigant to appoint the judges.

Parliamentarians have been upset with the higher judiciary giving politicians a bad name in recent years. Conceding that there are black sheep in politics, they wondered why it had become a fashion for high courts and the Supreme Court to make generalisations. The judiciary was meant to interpret the law, not make laws, they asserted, explaining partly their urge to clip its wings. While the judiciary was busy pointing fingers at the government, quashing appointments and questioning laws and policies, what has been its own record, they asked.

Trinamool’s Kalyan Banerjee, later praised and thanked profusely by Union law minister Ravi Shankar Prasad, was the most vehement. The chief justice of the Gujarat high court, Justice Bhaskar Bhattacharya, was not elevated to the Supreme Court, he alleged, merely because he had missed attending a function at an institution visited by the then Chief Justice of India. Bhattacharya’s plea that a case involving the institution was pending before his court cut no ice, he added. “A judge who never met a lawyer after he became a judge, who never attended a social function after he became a judge, was superseded because of the whims of the collegiums,” he asserted. Former law minister Veerappa Moily seemed to agree. “Even a briefless lawyer ends up as a CJI,” he quipped.

Why have a six-member Judicial App­o­intments Commission? Shouldn’t it have been an odd number? How will the two ‘eminent citizens’ be selected? Sho­uldn’t there be similar commissions at the state level? Why not launch an All-India Judicial Service to ensure direct recruitment of district judges through competition? The law minister had no clear answer, except to urge members to trust the sagacity of the prime minister, the CJI and the leader of the largest party in the Lok Sabha, who together will sel­ect the two eminent citizens.

Will the JAC interfere with the integrity and independence of the judiciary and can it remain free from political influence? Time will tell.