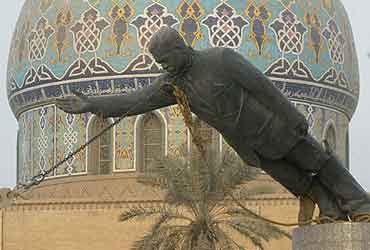 The End of Saddam Hussein—History Through the Eyes of the Victims
By Prem Shankar Jha
Rupa Price: Rs 395; Pages: 222
When you wake up one morning to find your legs have just been blown off by a piece of expensive artillery, the least you'd expect in return is a clear answer to the question "Why?". But those Iraqis who lost limbs, loved ones and the liberty to walk to the shops without getting caught up in a firefight are still waiting to hear what the point of last year's war was. As Prem Shankar Jha explains in his book, the reason given for invading Iraq was that the country was brimming with weapons of mass destruction. But if the US with all its resources can track down wily old Saddam buried in a hole under a garden shed in the middle of nowhere but not thousands of litres of WMDs, then there's a good chance they don't exist. So why was the war fought? Even the US secretary of state Colin Powell mused last week that "the absence of a stockpile changes the political calculus. It changes the answer you get".

Jha has done his own math and has attempted to provide the much- needed answer. The book's jacket suggests a long-running conspiracy to destroy Iraq by America, masterminded by Israel and aided by a naive western media. Jha is a formidable analyst and there is definitely a need for someone of his calibre to dissect this conflict. But the fundamental problem with this book is that it does not do what it promises. For you cannot tell Iraq's or anyone else's "history through the eyes of its victims" when you are writing about a country you appear never to have been to and with whose people you have not spoken to. Surely you must be seen to have done your own interviews if you are to be judged to have drawn accurate assessments of the role of others in such a controversial war. Arguments of an international conspiracy masterminded by Israel also look thin when the closest thing to evidence is the fact that some of those neo-conservatives in >Washington, who were banging on for years about getting rid of Saddam, happen to be Jewish. In fact, Israel is mentioned so little in the book it does not even make the index.

Jha does write with a compelling style and manages to condense Iraq's early history into good readable chapters covering previous conflicts; searches for WMD; and the way western governments ebbed and flowed over support of one of the nastiest men on the planet. But it's easier to be more accurate about history over time because after a few years most of the more wacky conspiracy theories have proved to be just that, wacky.

It's the second half of the book, which deals with the latest conflict, that is slightly disappointing. It's too early to write a definitive history of the war and so in the absence of hindsight one must fall back on journalism to provide what a proprietor of the Washington Post once famously described as the "first draft of history". And it's that lack of first-hand journalism that is the real problem with this otherwise useful book. If you couldn't be there, you at least had to go there afterwards to tell that story well. But one feels that Jha was instead left to sift though the raft of material and photographs floating around the internet and spend a lot of time in front of the TV. And so not all of his conclusions stand up to scrutiny. One core claim is that the two photographs (printed on the book's back cover) of two unnamed balding men with beards taken during the war "gave the game (sic) away" about the US manipulation of the war and its coverage by a gullible western media. The first photo shows the partially obscured face of a bearded man behind the leader of the (opposition) Iraqi National Congress apparently on April 6 in the southern city of Nasiriyah. The next one is supposed to be the same man three days later at the famous toppling of Saddam's statue in central Baghdad.

Is it the same man? I don't know and neither does Jha because no one knows who he is. It certainly doesn't prove that America's "coup de grace" in the propaganda war was to bus in a 'rent a mob' under the nose of a bunch of naive hacks to add some colour to an event they hoped would be the final dramatic end of the war. What we are presented with is a guess and that's really not good enough for a serious book like this, particularly when it's one of the few genuine attempts at saying something new about the war.

Cat's Out Of The Bag