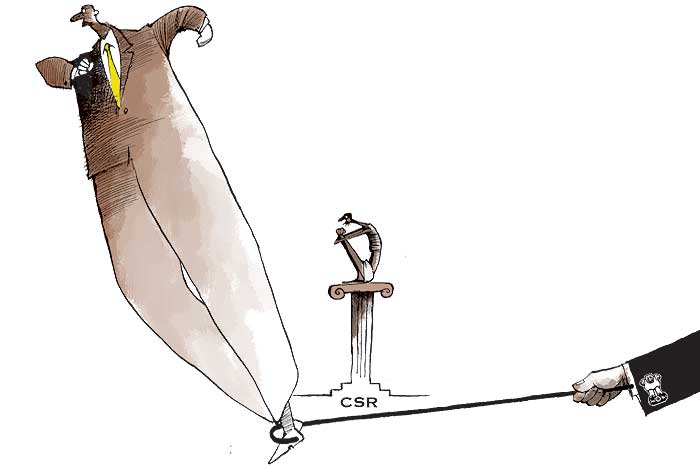 Thanks to the Satyam scam, the continuing protests against corporate land acquisition and the more recent Bhopal case verdict, public expectations of companies have plunged to a new low. It’s hardly surprising, then, that the government has resorted to a bit of tactical warfare: fresh bait is being prepared to encourage companies to spend more time, money and spirit on corporate social responsibility (CSR) projects. New voluntary norms on CSR, released last December, are being relaunched in August with greater stress on what companies ought to be doing.

The revised norms will delve into how companies should lobby, what kind of development agenda they should support, methods by which consumer rights must be defended. They will also provide broad directions on social engagement and transparency based on nine principles, including ethics, accountability, safety, responsible design, human rights and environment protection.

With the revised norms, the hope is that more companies—there are 1 million registered businesses in India, though only a handful are known for CSR activities—will adopt the practice. Yet, within a year, if rigorous attention is not paid, the government says it will consider mandatory corporate investments in social projects. Such projects are already compulsory for public sector units, which must spend 2-5 per cent of their net profit on CSR as per norms set by the Public Sector Enterprises Board last year.

Source: Partners in Change, yet to be released report. Based on interviews with relevant executives from 506 companies.

R. Bandyopadhyay, secretary (corporate affairs), stresses that although CSR has taken off, the efforts vary tremendously. “The government is trying to ensure that CSR shouldn’t be done just by a few companies. Everyone asks, ‘What’s in it for me?’ but the real issue is that the alternative—an unstable society—is good for nobody and not good for business either,” he says. This year, says Bandyopadhyay, the redone voluntary norms will be discussed with industry and monitored for compliance. Starting December 2010, the need for compulsory norms will be “reviewed”.

Some say this will be a hollow stick—what, after all, has the government done to enforce affirmative action by companies? Even so, perhaps this CSR drive is something India Inc will take note of. “Very slowly Indian companies are making the right noises on CSR, but they are still clueless, and end up doing things in their neighbourhood which amount to patchwork here or there,” says Noshir Dadrawala, CEO of the Mumbai-based Centre for Advancement of Philanthropy. Making CSR mandatory, he says, will perhaps generate a mixed reaction: “Anything that gets enforced gets resisted.”

To be sure, there are companies that do resist the idea of CSR, arguing that shareholders do not support investments in non-business ventures. “That’s why,” says Anirban Roy, who runs SEED, a private consultancy that helps companies plan and invest in the social sector, “CSR investments should be in areas directly related to the core business activity”. To do so, however, requires more than just help from a local NGO or two. Experts and analysts have started to insist that firms should get professional help. Even the government exhorts against just getting an in-house project manager or plant-head to identify development projects, for it will not have the desired effect.

As feuds intensify over land rights, making the right social investment is the one way to assure people they have a stake in a project. The other, say companies that were quicker than others to assess the social cost of business, is that CSR should be wound into the functioning of a company, not run as a charitable effort. “The public and shareholders will not resist CSR initiatives, they will lap it up if it’s done properly,” avers Sanjiv Paul, vice-president (corporate services), Tata Steel. The company runs two parallel CSR tracks—the environment track, in which pollution and safety are the concerns, and community interventions.

Similarly, at Dalmia Cements, there’s a shift towards CSR planners and separate management units. R. Gurumoorthy, spokesperson, says that the group is also making a strategic shift. “Apart from the personal investment plans of the group owners—such as investments in temples and in educational or vocational projects in their state of origin, Rajasthan—we only do CSR in areas where our direct business interests lie,” he says. The company has invested in an ITI near Trichy, in forestation programmes, and also engaged with NGOs to conduct a need-analysis for healthcare projects.

Khurram Naayaab, who is Programme Manager of Partners in Change, which helps companies research and implement CSR projects, says that with increasing pressure from the government and by observing the recent struggles to acquire land, smaller Indian companies also want to be involved in CSR. “We’ve seen more businesses move towards CSR, including large corporates and smes,” says Naayaab. At the moment, Naayaab’s team is working with three firms on sustainability reporting; they are from states like Himachal Pradesh, Andhra Pradesh and Nagaland. “There’s greater awareness of CSR, even in areas that are hard to reach, partly because of the global emphasis on better governance—many newer and smaller companies are responding to market pressures with better ethics.”

In another example of company-related CSR, Mohini Daljeet Singh, who runs the Max India Foundation, a separate unit of the Max Healthcare group, says the group  has decided to work in healthcare, and concentrated its efforts in northern India, where the business is based. “We recognised that the Max businesses are all about ‘life’, whether healthcare or insurance, and so concentrated the social ventures, as a professionally run unit, into providing low-cost or free-of-cost healthcare,” she says.

While the government has sent mixed signals on whether tax exemptions would be provided to companies making CSR investments, the general view is that tax breaks should not be the guiding force behind CSR. Experts feel that in any case existing exemptions, such as under Section 80 of the Income Tax Act, already allow charitable spending some exemption. “The better way to give an incentive to companies is by creating an exclusive group, or chamber, of companies that perform well on CSR standards,” says Dadrawala.

The global driver is there—international clients want to deal with suppliers who have a “clean” supply chain. The local pressure is also there—people no longer give in to losing their health and livelihood for an industrial project. What’s missing, still, is a clear policy on the who and how of CSR. Maybe the government is stepping in just in time with its rules.