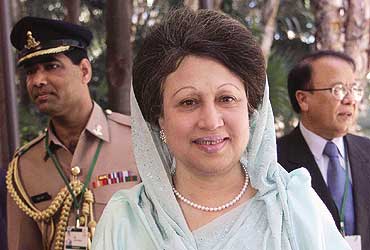 But they have raised doubts about Dhaka's intentions in inviting Musharraf at a time he's under fire in his own country for subverting democracy. Many here are asking if the visit is intended to grant the military dictator legitimacy. Or if it's a signal to New Delhi of the government's displeasure with India.

The officials, of course, rubbish these doubts. But foreign minister Morshed Khan did clarify that Bangladesh doesn't want to grant legitimacy to any dictator, that "it (democracy) is entirely an internal matter of Pakistan and its people". He further said that Musharraf's visit was in response to Prime Minister Khaleda Zia's open invitation to SAARC leaders at the Kathmandu summit early this year. "We are ready to embrace any leader who wants to come here," he said.