Remember, The Boss Is Mostly Kink 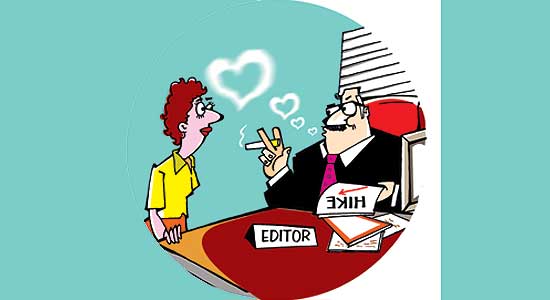 It’s not just politicians, media bosses too are guilty of sexually exploiting young reporters. Typically, the carrot an editor or a senior journalist dangles before a young woman reporter is the promise of good assignments, promotions and the freedom to wield authority over her peers. But what if the woman in question repulses the advances of her boss? Well then, there is every possibility of her being fired or being put on a beat that includes covering Rotary Club meetings and attending the birth of lion cubs in the zoo.

Hell hath no fury like an editor spurned. The concerned subordinate will be stripped of a plum beat or be painted as incompetent at her job.

The irony of it all is that even though it projects itself as the guardian of democracy and morality, the media is replete with stories of women who have been exploited by their editors. Take this example of an executive editor of a prominent English newsmagazine in the ’90s. He elevated a young journalist reporting on fashion and the glitterati to covering mainstream politics. But to rise up the ladder, she had to virtually become his mistress. Of course, careerwise, she literally went places—flying across the country, staying in five-star hotels and doing big-ticket stories while her seniors sulked in the Press Club. The affair was widely discussed among the staff of the magazine, but no one could do much about it. After all, it involved the boss.

Another mainstream editor has a well-deserved reputation for a glad eye. Pretty young things have always been his speciality and he ensures there are enough young women on his staff to satisfy his libido. Then there is a Delhi-based editor of a paper who, despite being married, had a string of affairs with women subordinates. Recalls someone who worked with him: “At one point, there was this 19-year-old girl he was infatuated with. She was unduly favoured and would walk into meetings with a swagger that was strange for someone so junior. Having an affair with the boss helped.”

But for every woman who says “yes” to a fling with the boss, there are plenty who also say “no”. There is the well-known case of a city editor of a leading Mumbai newspaper who made advances towards a young reporter. For a while she was given plum assignments and pampered. But when she refused to have intimate relations with the boss, she found herself in the doghouse. Hell hath no fury like an editor spurned.

While many women journalists have been the victims of such harassment, very few complain. The reason: editors are both powerful and well networked and once you get into their bad books, it doesn’t take them long to spread the word that you are professionally incompetent or a difficult person to work with. Also, news organisations do not have an HR person who looks at cases of sexual harassment. As a result, no action is taken when a senior harasses a woman who is his junior. In the mainstream media in big cities, a victim at least has the option of approaching the management and lodging a complaint. But what about language papers where the editors are the owners? Here, the woman employee has to either give in or quit her job. It is another matter that there are fewer women journalists in the language media.

The explosion of TV news channels has added another dimension to the problem. Television not only employs a sizeable number of young, good-looking women, they also work with men in a closed environment. One famous story involves the anchor of a Hindi news channel who made life miserable for a TV reporter. Apparently, the gentleman in question wanted to have a relationship. When he was turned down, the harassment began. Finally, the woman had to relocate to another city.

The media may go to town with sex scandals involving celebrities and politicians. But the skeletons in its own closet? They rattle about for a while but rarely tumble out.