Remaking 'Made In India'

The metamorphosis in manufacturing is near-total; we are now in the global game 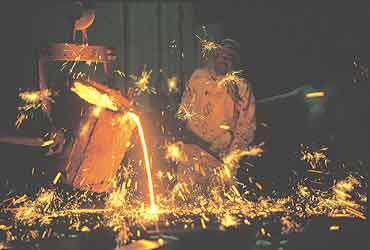 outlookindia.com
-0001-11-30T00:00:00+0553
Of all the sectors of the economy, Indian manufacturing has probably come the longest way today from the contrived system that prevailed up to the beginning of the nineties. At that time, an Indian manufacturer of engineering goods would have found it difficult, if not impossible, to become a major supplier to any marquee global customer. The reasons were: negative perceptions of international customers due to the country's poor image, inadequate infrastructure, red tape with interminable delays, and a track record of making shoddy products.

With liberalisation, Indian industry gained international exposure because of which it became imperative for companies to rework their strategies to become globally competitive. Over the years, many companies underwent comprehensive restructuring that involved massive cost rationalisation, shedding of unprofitable businesses, initiatives to improve efficiencies in areas of operations, technology and product development and unlocking human resource capabilities to effect productivity improvements. The result is that there are now a large number of companies with global mindsets to build scale and achieve cost excellence. Some of these companies have gained access to international markets including through global acquisitions, have built strong design, engineering and innovation skills and are managing world-class talent pools and organisations. Bharat Forge is happy to be in this group of companies that are at the forefront of making "Made in India" a global brand.

We manufacture automotive components including critical engine and axle parts for passenger cars, diesel engines and medium & heavy commercial vehicles. Till 1997, our focus was almost entirely on the domestic market with a relatively insignificant portion of revenues from exports. We could have continued the same way, which would have resulted in steady incremental growth. Our vision, however, was different—we dreamt of making Bharat Forge a global company and were convinced that we could achieve our goal.

The five-year strategic plan we prepared for our company in 1997 had three objectives. One, to aggressively grow our business by accessing global markets; two, to be among the top three global players in our industry segment; and three, to set global industry benchmarks in cost, quality, technology, speed of marketing and customer service. Our strategy was aimed to de-risk our business through exports and manufacture products for non-automotive applications that included oil and gas and construction equipment industries. Our technology and product development plan was to manufacture more and more value-added machined components. On the operations side, we decided to build world-class, international-scale facilities and continuously keep a handle on costs. Finally, our human resource strategy was centred on creating a lean and qualified organisation, removing embedded mindsets and providing conditions for bottom-up change.

We followed a stepwise approach in which we first built our organisation by placing emphasis on improving cost efficiencies, enhancing product quality and rationalising internal processes. We then leveraged the domestic market to build an export orientation in the company by creating world-class, world-scale capacities and finally created an organisation structure to enable us to respond efficiently to requirements of global customers. By 2002, we were ready to conduct operations across the world.

Today, Bharat Forge is a supplier to 38 global oems and tier 1 suppliers that include General Motors, Toyota, Ford, DaimlerChrysler, Honda, BMW, Volkswagen, Audi, Renault, Volvo, ArvinMeritor, Dana Corporation, Cummins, Caterpillar-Perkins and First & Second Automotive Works in China. We have a presence in every geographical area in the world that has an automotive industry. About 45 per cent of our revenues are through exports and we have been the country's largest exporter of automotive components for the past three consecutive years.

One of the criteria for a global company is that it should have a manufacturing presence in multiple countries and should not only be an exporter. So, in January 2004, Bharat Forge acquired Carl Dan Peddinghaus (CDP), the second largest forging company in Germany with two manufacturing plants. The acquisition has resulted in a wider market presence, larger product offering, deeper penetration in the passenger car segment, and a manufacturing presence in one of the most developed countries in the world. In the past year, we have succeeded in turning around CDP and have also made it profitable. Significantly, the entire original workforce of 800 employees has remained with us.

Recently we acquired another German company, CDP Aluminiumtechnik, that manufactures forged aluminium components. This acquisition will contribute in further widening our product portfolio and enable us to provide customers with a larger bouquet of components encompassing steel and aluminium from a single source. This is a unique feature of our competitiveness that distinguishes us from all our international rivals. 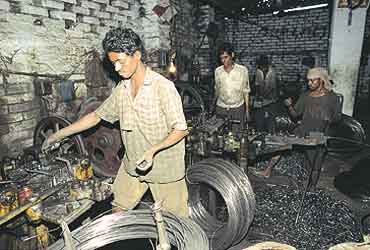 With manufacturing facilities in India and Germany, Bharat Forge is now the second largest forging company in the world. Our goal is to further consolidate and expand our business so that we can capture the number one position by 2008-2010. It is a dream that we are committed to realise and towards which our entire organisation has developed concerted focus.

There are now an increasing number of companies in the Indian manufacturing industry who have developed a global vision for their business. India's niche is in the manufacture of skill-intensive products that include automotive components, apparels, electrical and electronic products, speciality chemicals and pharmaceuticals. In the automotive industry, the growing trend of outsourcing components from low-cost countries is an opportunity for India to attain the 'top 2' position among developing countries by 2015. Our industry has targeted to achieve exports of $20-25 billion, a goal wwe are pursuing relentlessly and which will make us an important global outsourcing hub. Many Indian companies will be at the forefront in capturing this opportunity. Their successes will motivate many other companies, which will result in 'Brand India' being able to carve unassailable advantage in global industry. The path that we have chosen is distinctly the way for us to go, and could result in at least 10 Indian companies achieving their aspiration for global leadership in the next 10 years.