“Sit back and enjoy the drive.” That’s the message autonomous technology has for today’s driver. 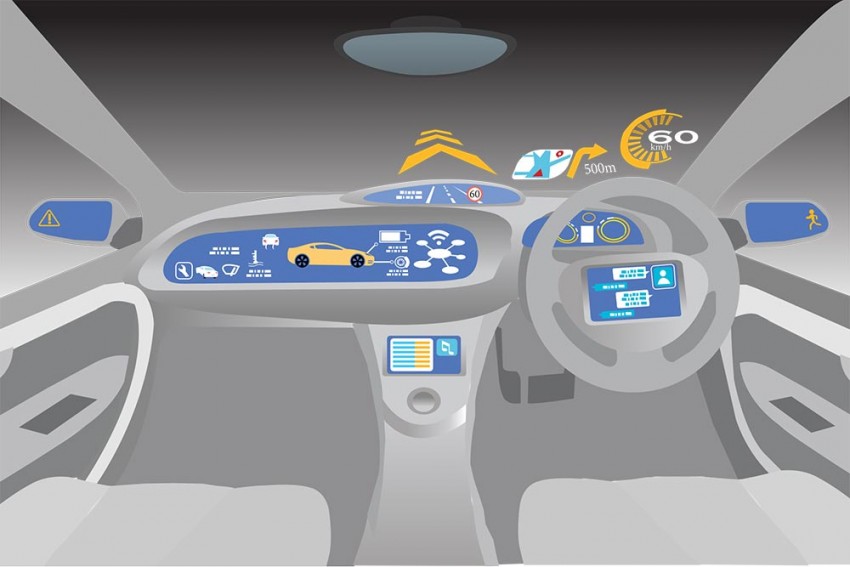 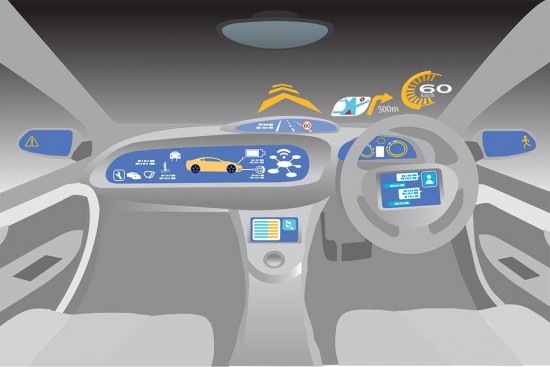 “Your attention please. This car is backing up.” In the late eighties and nineties, that was pretty much all the assistance a driver ­received during his rever­sing manoeuvre, more like having a talking horn in the rear. The message was meant to alert people outside. ­Today, automobile gadgets interact with the driver in more ways than one.

Sometimes it’s a blip from the window, a thrum on the steering, or the feeling of the pedal being snatched from under your foot…It’s a whole new generation of driver-assist features at work for you. They alert the driver through sound, visual or sometimes even physical mediums, when they sense a potentially dangerous situation. Some just warn you, some support your action and some act on your behalf. Most driver assistance features are there primarily to enhance safety while a whole bunch of them are designed to make life easier and the drive more efficient and enjoyable.

Evolving from the looped voice alert in reverse gear, concepts and technology of ‘back up support’ have changed by leaps and bounds through the last two decades. First came the sensors on the bumper, then a camera on the rear and a visual that combined both to show you how far or near the objects were. The camera evolved into wide-view that captured objects on the sides as well. Accurate guidelines evolved showing you precisely where you were headed with every degree of turning the wheel. Then additional cameras were added to show you what lay ahead, by the curb, on the sides. Not long ago, a simulation of the top view was devised from all these camera images to place the car in the right context. Now, the driver can simply reverse the car into the designated parking lot by simply drawing a line on a console!

Just when parking was made foolproof for drivers, in came the ‘automatic par­king assistant’ and took away the entire task of parking a car, leaving the driver a mere onlooker! These days, a car can park ­itself without the driver’s intervention on brakes or the accelerator. Better still, it can watch out for approaching veh­icles while reversing out of a parking space, alert the driver and if ­required, ­apply the brakes to avert a collision!

The blind spot alert was one of the earliest driver assistance features introduced into the cabin, and not without reason. Few drivers consistently stick to the habit of shoulder check when changing lanes or overtaking, and often satisfy themselves with a casual glance sideways. The blind spot information system, or ‘lane departure check’ as different manufacturers call it, flashes and beeps to warn about the presence of a vehicle in the hidden area. 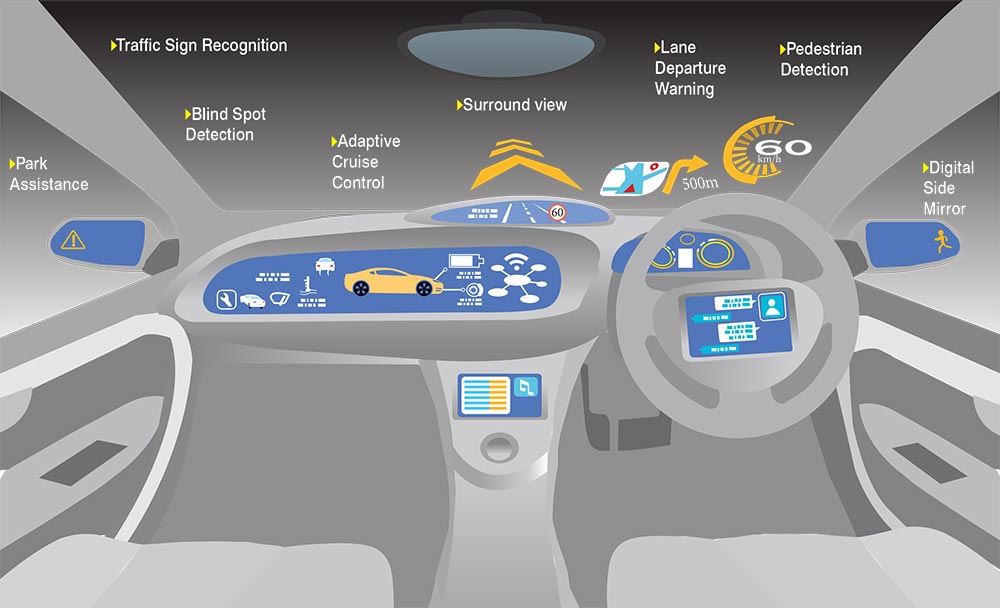 Complementing the blind spot ­detection system is the lane departure warning. Addressing the driver’s tendency to drift unintentionally into the adjacent lane or even cross over without using the indicators, the gadget senses the lane markings and alerts the driver—with a thrum on the steering in some cars! Crossing the thin line between driver assistance and autonomous driving, the lane-keeping function goes a step further to gently steer back the straying car by selectively ­applying brake pressure.

There are many drivers on our roads who pay no attention to lane discipline. The smooth implementation of these functions will require us to add lane discipline to our driving habits. But, it will only be possible when our roads have clear lane markings.

Another traffic safety concern is failure to keep a safe distance, one of the biggest causes of accidents. Which is why, the use of ­radar based driver assistance was a ­major leap towards autonomous or semi-­a­u­­tonomous driving. While cruise control, which was one of the oldest ­advances in modern driving convenience, automatically maintained the speed of a vehicle, radar-based cruise control made it possible to maintain a constant distance too.

Many manufacturers call it ‘advanced cruise control’. Mercedes has named it Distronic. Soon, the technology will be used to warn of unsafe car-to-car distance, even when the car isn’t on automatic cruise. Forward collision warning, and eventually forward collision avoidance, allows the vehicle to slow down or brake to a stop, in case the vehicle ahead stops or slows down abruptly.

Manufacturers like Volvo, Audi, Ford and Honda have fine-tuned the camera and sensor-based technologies in ­another challenging area of road safety—pedestrian detection. The German trio has exclusively added night vision using infrared sensors to their list of safety features.

“Among all ­automotive cabin gadgets, I find the 360 degree parking camera ­the most beneficial.”

A large part of the safety assistance features are built around the eventuality of a collision and its outcome. We have seen collision warning systems and avoidance systems. There are collision mitigation systems, and going beyond, safety ­applications that consider the possibility of a second collision. After the safety devices, including the airbags ,are dep­loyed in a powerful collision, what happens if the car continues on its deflected course and hits another object or a wall? Volkswagen has ­introduced an automa­tic post-collision braking system that contains the rem­aining ­kinetic ene­rgy so as to reduce the ­impact of a second collision. This feature is standard in its latest Passat models sold in Europe.

This is a very considerate feature on Indian roads, where the headlight goes where the incline of the road throws it. Often the beam from an oncoming ­vehicle ends up right in the drivers’ eyes, blinding them temporarily. The adaptive lights shift to a low beam when it senses traffic from the opposite direction and goes back to high beam, once the road is clear.

The aim of autonomous driving is daringly ambitious—to ­reduce the possibility of human ­error to a point that makes zero accidents a ­reality. Gadgets aimed at improving safety in a vehicle have the advantage of staying alert all the time, ­unlike the driver’s attention that is likely to flag sooner or later!

Life is hooked to a screen

One of the most conspicuous changes inside the car can be seen in the touchscreen itself. In a range of luxury cars, the screen has become wider—from 10.2 inch displays to virtual cockpits filling the entire dashboard. Even as the tablet has been all but pushed out of everyday use by large smart phones, they have popped up in vehicular cabins as multimedia and navigation screens.

These devices can go a long way in making one feel at home in a cabin like that the Volvo XC90. The ‘tab’, with its familiar flick and flip, and pinch and swipe functions opened the gateway to a whole set of digital controls. The new Talisman from Renault too features a similar tablet like screen, giving it an advantage of familiarity and tech-savviness in its segment.

There is still space for imagination

Smart phones introduce us to the technology that we meet in car cabins much later. Voice command functions have made way to gesture control in many vehicle cabins, like the new BMW 7 ­series or Porsche’s new electric four-door. In fact, gesture control was among the concepts that Jaguar Land Rover wowed the world with, a couple of years ago. While they still remain largely ­concepts, their fascination still refuses to wear off! Imagine rolling down the windows or winding back the sunroof with a sweep of your hand. Or even better, what if your car waited on you like an attentive butler to adjust the climate or music volume, and all you had to do was to think aloud!

So what next, mind reading? Well, Jaguar’s proposed cabin technology came alarmingly close to just that. It would predict behaviour using ­algorithms to come up with ‘helpful ­advice’ for the driver. It would ­remind you to top up on fuel before a long drive, or to cancel your drive-in ­order and get going in case something ­urgent came up. Well, if you still wanted to pick that sandwich after all, your car could even text your colleagues that you’ll be late. But it wouldn’t cook up excuses. Not yet, thankfully!

Questions such as “shouldn’t lanes be clearly marked on our roads before introducing lane keeping assist” notwithstanding, some of the technology currently available can make driving easier and our roads safer. The dread of not fitting into a ­reverse parking is as universal as of failing license tests. So, ‘park assist’ is a blessing wherever in the world, and so is cross traffic alert. The former in its more ubiquitous form uses guidelines and sonic alerts to guide the driver into a parking lot, and simply parks the car for him. The latter watches out for vehicles approaching from the sides while reversing out of the parking space and in its advanced form will even stop the car in time to avoid a collision.

Advanced technology for everyone

While advanced technology involving cameras and sensors was introduced in the luxury segment by global brands like Audi or Mercedes or Range Rover, as technology evolved and became more affordable, other manufacturers like Nissan, Hyundai and Mazda began enthusiastically using these to keep up with competition. As with everything good that arises from competition, the customer is the ultimate beneficiary!

(Sudeep Koshy, based in UAE, is a ­leading motoring blogger. You can find  him at drivemeonline.com)