Reign Of A Civil Despot

He isn't retiring, and rather than give up power, Musharraf aims at a puppet democracy 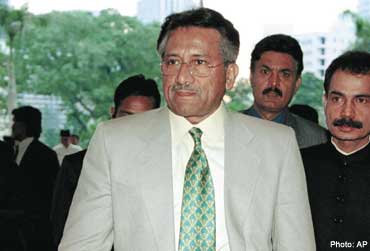 outlookindia.com
-0001-11-30T00:00:00+0553
It's now an open secret: Gen Pervez Musharraf wants to wear two hats—the president's as well as that of the Chief of Army Staff (coas)—and, in the bargain, expects to be paid double the salary for his efforts! The decision to increase the salary of the president of Pakistan by a whopping 200 per cent, then, comes as no surprise, never mind the dire straits the country's economy is in.

Gen Musharraf's decision to continue as coas even after his term expires in October was made public recently. The General is indeed taking no chances. Like other military dictators before him, he realises his strength lies in wearing the khaki, and he's quite willing to risk the wrath of senior generals who have been eyeing the coas office. Says former ppp interior minister Aitizaz Ahsan, "His decision shows the insecurity of Pakistan's strongman. This is typical of military dictators when they get bogged down in problems for which the only answer is an elected government." Indeed, Musharraf's decision has reversed the healthy post-Zia period tradition—that the coas always retires on time. Appeals from politicians that he should review his decision have, predictably, met with stony silence.

In reversing the tradition, however, Musharraf has unwittingly created problems for himself and the army hierarchy. For, the question now is: what happens to the generals—Commander 5-corps Muzzafar Usmani, Chief of General Staff Lt Gen Mohammad Yousaf Khan, isi chief Lt Gen Mahmood Khan and Commander 4-corps Lt Gen Mohammad Aziz—who could've succeeded Musharraf at the general headquarters? Says a defence analyst, "If Gen Musharraf secures an extension as army chief, it means all his October 12, '99 (the day of the coup) comrades would retire unless they too are given an extension of one year as three-star generals. The other way out is to elevate one of them as a four-star general and appoint him as chairman, Joint Chiefs of Staff Committee, and make the others governors." In other words, Musharraf has to tread cautiously lest he alienates his comrades who helped him overthrow Nawaz Sharif.

Obviously, Musharraf could anoint himself president and coas and occupy the two august offices till October 2002, when (because of a Supreme Court order) he has to call for fresh elections and transfer power to a civilian government. But this option is fraught with serious consequences for the military regime. For one, a fresh election could lead to people electing a National Assembly bitterly opposed to Musharraf. Such an Assembly could then refuse to adopt constitutional amendments validating the economic and political 'reforms' the regime has undertaken in the last two years. These 'reforms' include a host of economic policy decisions taken at the behest of lending agencies and donor countries, as well as steps like local body elections and district governments. (As long as the Constitution is suspended, Musharraf is under no constraint to have his decisions ratified or validate his possible decision of becoming both the president and coas.) That's precisely why, observers here feel, Musharraf would prefer reviving the Assembly now and ensuring that the regime's initiatives are then incorporated into the Constitution through amendments endorsed by members 'close' to it.

The General also wants the Constitution to define a more vibrant role for the army and, consequently, set right what he calls the "imbalance of power between the civilian government and the military. " Many feel this could lead to the setting up of a National Security Council, a forum that former coas, Gen Jehangir Karamat, had suggested to Nawaz Sharif. The proposal had then cost Gen Karamat his job. A pliant National Assembly could also be utilised to settle old political scores. For instance, one of the proposed amendments allows politicians only two terms as PM, countering the possibility of either Sharif or Benazir Bhutto staging a comeback. Says the English daily The News, "The argument that it would serve as an effective check against dynastic politics is quite valid. It'll also ensure that the nation periodically gets fresh leadership... But the final check on a leader in a democratic society is always the public opinion. A vigilant public ensures that the top leadership functions within the parameters of the political system."

The moot question, however, is: can the generals muster a two-thirds majority in the Assembly to amend the Constitution? A tentative step was taken last week when, with the help of the intelligence agencies, the regime split the Pakistan Muslim League (pml)—which commands a two-third majority in the suspended Assembly—and cobbled together a new faction under Mian Azhar. Yet it's debatable whether Azhar can win over the pml supporters. Other political formations remain hostile to Gen Musharraf, as was evident in the crackdown ordered against the Alliance for Restoration of Democracy (ard). Says political analyst Rashed Rahman, "The big unanswered question is: will the masses go on suffering in silence while the imf and World Bank prescriptions grind their noses further into dirt and poverty? Spontaneous, anarchic, and perhaps violent protests against the high-handedness and unsympathetic attitude of the military government and its functionaries can't be ruled out. Were this to become a relatively widespread phenomenon, the regime would be hard put to make an orderly political retreat."

Indeed, it's time the military handed over power to an elected government. With the country facing drought, a crippling debt, and failed policies on Kashmir and Afghanistan, Musharraf seems to be fast running out of options. Warns the daily Dawn, "It would help therefore if the military government were to narrow its focus and concentrate on the modalities of holding national elections and transferring power to where it rightly belongs: the chosen representatives of the people. After all, we have barely a year and a half before the Supreme Court's deadline for a democratic restoration comes to an end. When, instead of concentrating on this essential requirement, the military government waxes eloquent about the wonders to be achieved by local elections and the so-called devolution plan, doubts are bound to arise in the public mind about what the future may or may not hold."

But then, all indications are that Musharraf can't be expected to heed such warnings and initiate steps to restore democracy. Instead, it seems likely that he'll simply arrogate more powers and administer the country through a pliant National Assembly.