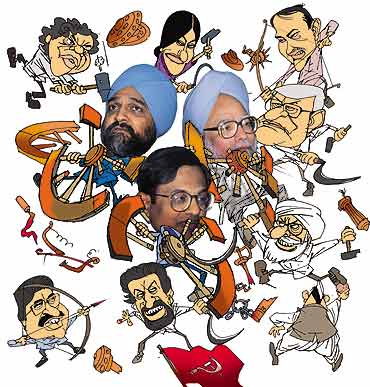 2. Telecom minister Maran proposes strict conditions to stall the proposal to hike FDI in the sector : Issue still in a limbo

4. Hike in FDI cap in the insurance sector seems to be the holy cow as far as the Left is concerned: Likely to still go through

5. Little interest in selling off PSUs to private sector; but there’s a consensus on public sale: Few IPOs this year

Dr Manmohan Singh should learn from history about "Left power". In the 1950s, when India's economic planning was in its nascent stage, US president Dwight D. Eisenhower deputed Milton Friedman, rabid private-capital messiah, as an advisor to the Indian government. The appointment, prompted by Jawaharlal Nehru, was opposed and Friedman never made it to New Delhi. The most stinging attack came from left-leaning US economist John Kenneth Galbraith, who said Eisenhower's move was "like asking the Holy Father to counsel on running a birth-control clinic."

On July 24, 1991, Manmohan was on the verge of tears. As he stood up in Parliament to present his first budget at 5.30 pm, the opposition led by the Left didn't let him speak for a long time. His critics felt that most budget proposals, together with the dramatic changes announced the previous month, put India on a reform path dictated by the World Bank. The proposals went through only after Manmohan disproved the allegation.