Reeling In The New

'2003 will decide whether Bollywood will survive or if it'll be The End.' Here are some of the milestones on that crucial course. Make your choice. 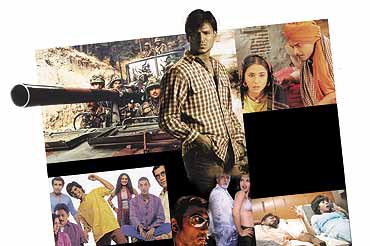 "The flow of films will depend on whether India reaches the Super Six," says distributor Shravan Shroff.  So most of the action is likely to unfold between April and August, when the little will fight the lofty. After a lone Rs 50-crore Devdas in 2002, ’03 has at least five multi-starrers. Pitched against Sooraj Barjatya, J.P. Dutta and Rakesh Roshan are greenhorns with small, alternate dreams—Tigmanshu Dhulia, Gaurav Pandey, Praval Pandey and more.

Meanwhile, distributors are still going slow. "They’re not picking up projects on announcement but only after they are ready for release," says distributor Sanjay Mehta. Of course, the collective wish is that Bollywood should now start on its journey to redemption. "The battle of bad films will clear out this year," predicts Film Information’s Komal Nahata. Agrees trade analyst Amod Mehra: "2003 will decide whether Bollywood will survive or if it’ll be The End." Here are some of the milestones on that crucial course. Make your choice:

The Hero
Director: Anil Sharma
Starcast: Sunny Deol, Preity Zinta
The Gadar team gets together again. Made for Rs 40-45 crore, almost double the cost of its predecessor, the trade hopes it’ll also bring in double of Gadar’s Rs 65 crore returns. Director Anil Sharma claims it’s an exact opposite of the 2001 blockbuster—from period cinema he moves on to the hi-tech, modern world of terrorism and spying. Shot extensively in Canada and Switzerland, the film’s about the agony of a spy, what he loses for his beloved country. "Everyone makes a film about a spy’s victories, maine uske dard ki kahani banayee hai (I’ve made a film about his pain)," says Sharma. So will it have the Pakistan angle? Yes. "It’s about RAW vs ISI," claims Sharma. A must-see for Mr Vajpayee and Gen Musharraf.

Koi Mil Gaya
Director: Rakesh Roshan
Starcast: Hrithik Roshan, Preity Zinta, Rekha
Indian mainstream’s first major attempt at sci-fi. Rakesh Roshan calls it the story of a mother, her son, his lover and an alien. "It’s about love and friendship," he says. Hrithik’s character is the most intriguing. "It’s something that has never been attempted by an Indian actor," claims Rakesh. He plays an 11-year-old kid. While you figure that out, let’s inform you that the other important character, the alien, has been created by Australia’s Dinini Effects and Mark Kolbe, the man behind Independence Day, Godzilla and Swordfish, does the SFX. Trade buzz pitches the Rs 30-crore venture as a one-size-fits-all film. "It’s a complete movie with emotions, romance as well as fights," says Mehra. Our guess: Spielberg’s ET meets Tom Hanks’ Big.

Main Prem Ki Diwani Hoon
Director: Sooraj Barjatya
Starcast: Hrithik, Kareena and Abhishek
As usual, the House of Barjatyas won’t speak up, but the industry is talking. Gossip has it that this one’s a love story about mistaken identities, a remake of their old hit, Chitchor. At a Rs 20-25-crore budget, it’s being regarded as the costliest Rajshree film till date. Also, marking a clean break from tradition, this home-loving studio has even ventured abroad to shoot in Australia.

LOC—Kargil
Director: J.P. Dutta
Starcast: Every male actor in Bollywood, even Bikram (remember him?) Saluja. Also Raveena Tandon and Kareena Kapoor
LOC attracts attention for its sheer size. "It’s easy to say who is not there in the film," says Mehra. "Every 10 minutes you’re going to see a new face on the screen," says Nahata. The story, we all (should) know, is Kargil revisited. Watch out for the longest song in the history of Indian cinema: a 13.5-minute composition from Anu Malik.

Bhoot
Director: Ram Gopal Varma Starcast: Ajay Devgan, Rekha, Urmila Matondkar, Nana Patekar and Fardeen Khan
The starcast’s as huge as Jaani Dushman. But this Rs 10-crore film claims to be a more sophisticated attempt at evoking terror. No haunted houses and no ghosts clad in sheer diaphanous white. Horror unfolds in a Mumbai apartment. "I want to break all the clichés and scare the audience when they least expect it," says Varma. We’re waiting.

Pinjar
Director: Chandraprakash Dwivedi;
Starcast: Manoj Bajpai and Urmila Matondkar
Based on Amrita Pritam’s Pinjar, it takes the audience back to the days of Partition. "The idea is to enlighten the society about that era," claim the makers.

Satta
Director: Madhur Bhandarkar;
Starcast: Raveena Tandon, Atul Kulkarni
Raveena is a politician who beats men at their own game.

Dum
Director: E. Niwas;
Starcast: Vivek Oberoi and Diya Mirza
Uday (Vivek) aspires to be a cop. His values are tested against the corrupt trinity of mafia, politics and the police.

Stumped
Director: Gaurav Pandey;
Starcast: Raveena Tandon and Aly Khan
Raveena waits for her husband to return from the front in Kargil while her neighbours are obsessed about watching cricket on TV.

Chota Jadugar
Director: Jose Punnoose;
Starcast: Suraj S. Balajee, S.P. Balasubrahmaniam
Eight-year-old kid magician Indrajith is forcibly taken to New York by his father to keep him away from his calling. He runs away from home and in a series of adventures on NY streets he befriends street dog Romeo and a group of circus dogs and gets chased by petty thieves. 3D effects, magic tricks and loveable performances from 40 canine actors, including Barkley (he featured in American Beauty), promise to make this every child’s favourite fantasy.