"If the Congress comes back to power, give me credit; if it loses, hold me responsible," he had said... 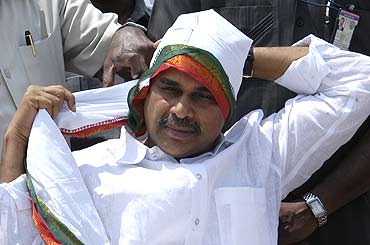 What makes this Andhra victory special is that there were too many hurdles this time round for the Congress. It had lost the grand alliance with the Telangana Rashtra Samithi (TRS), the CPI and the CPI(M) to the TDP-led ‘mahakootami’ (grand alliance). Besides, it had to counter the frenzied launch of Chiranjeevi’s Praja Rajyam Party (PRP), which was expected to cut into Congress votes in the coastal districts. The promise of social welfare programmes like the TDP’s Cash Transfer Scheme too had threatened to wean away votes from the Congress. There was also a strong focus on the ‘monumental corruption’ of the YSR regime. In the end, none of these seem to have influenced the voters.

The Congress electoral strategy to deny tickets to about 55 sitting MLAs to offset the anti-incumbency element is now being hailed as a masterstroke, but that alone has not sustained the Congress government. Welfare schemes like the Arogyashree scheme offering free medical support to the poor, the Indiramma housing scheme for BPL families, the pension scheme for widows and the aged and also rice at Rs 2 per got Congress the votes.