Development is key. Ideological wars or not, the Party needs a makeover. 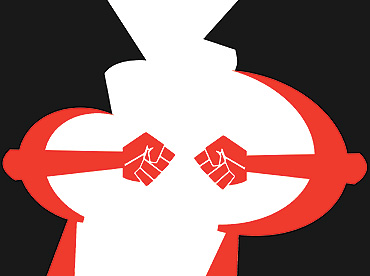 outlookindia.com
-0001-11-30T00:00:00+0553
The iconic struggle between Kerala CM V.S. Achuthanandan and powerful party secretary Pinarayi Vijayan could be the beginning of a revamp of the CPI(M) in this southern state. Its direction, extent and shape are unpredictable. But a major shake-up seems in the offing. Whatever form it takes, it'll be good news for Kerala. For, the CPI(M) is certainly the most entrenched political party of Kerala and Malayalis are foredoomed to being ruled by it every five years or so. Rule by the CPI(M) and its allies is no joy, it is a grim prospect. Take the current ministry headed by Achuthanandan. Its Quixotic antics and goof-ups are good fodder for the media but fatal for a sinking society like Kerala. Even the few ministers and officials who try to perform are lost in the free-for-all. One must hasten to add that the Congress is hardly better when in power. Only, it doesn't go for the jugular of the people so often.

The implications of the present combat goes deeper than the personal ambitions of the players. In all probability, it could lead to the moment of truth that has been long lying in wait for the party. Over the last half-century, Communism has had a gala time holding power in Kerala and has taken the lead—followed by other parties—in pushing the state's economy to a dead-end. The Pinarayi-Achuthanandan faceoff is an unmistakable sign of the party machine rethinking its survival strategies. For a party known for its shrewd and cunning ways—remember E.M. Sankaran Namboodiripad—it would have been surprising if this hadn't happened. Something inside the machine has begun to read the signs of the times and sit up, not just dismiss it with another slogan. Pinarayi and Achuthanandan are only markers of this process.

A section of the party—time only will tell if it's the majority or not—is awakening to the new global and Indian economic realities and recognising that the party's survival depends on an ideological makeover. Despite the melt-down, globalisation refuses to go away. People are not willing to be weaned away from the Good Life in which they watch the Marxists themselves rollicking. Party cadres are dwindling. Full-time party workers need to be paid salaries. Youth prefers the 80° centigrade heat of the Gulf to the empty hot air of revolution and its deprivations. What the reformists could bring to the party is a capability to understand the complexities of the globalised world without the blinds of dead slogans.

Achuthanandan, an admirable old war-horse steeped in the Communist mythology of the '50s and '60s, represents the hard-core orthodoxy. And he certainly has the populist advantage. As the head of a government specialising in unmitigated disaster and disorder, his popular following is amazing. This is because Malayalis as a whole are given to deep-rooted conservative fantasies even while fervently raising revolutionary slogans and are perfect fall guys for media hype. Achuthanandan seemed to have planned it all. During the last UDF term, he had placed himself in the headlines with flying colours as a messiah fighting a one-man battle against the wicked forces of corruption, immorality, capitalism etc. As chief minister, he straightaway launched himself into reckless adventures like the massive demolitions at tourist spots like Munnar, which were Himalayan blunders but phenomenally popular. Malayalis really believed the JCBs pulling down world-class resorts were messengers of a new god. Only when the machines stopped short of the unauthorised mansions of the CPI and CPI(M), some had doubts.

It is Pinarayi who leads the reformist group. He is a taciturn, behind-the-scenes, matter-of-fact politician hardly commanding his opponent's charisma. He's known to be a no-nonsense administrator and a hardliner of the toughest kind. He has been recently named in the CBI chargesheet on allegations of bribery in granting a contract to the Canadian company Lavalin while he was minister for electricity. Though by all accounts the commission money went to the party coffers, Pinarayi must face the music.

Looking back, it seems Achuthanandan had more foresight. His image-building exercise paid off when he was denied a seat in the last assembly polls. He instantly became a popular hero-victim. The seat denial was a result of the party's attempt to move into a new ideological phase. No one knew Achuthanandan better than the party and it knew what havoc he could play. But the young happy-go-lucky turks of the PB had other dreams, all of which have now turned sour. The party stands split and battered. As a Malayali who can't escape the party's hegemony as long as I live here, all I can hope is that if not Pinarayi, somebody or something reforms it. Oh, we need a break!

'We Will Fight The Pinarayi Case Politically And Legally'